We were gone 11 1/2 hours yesterday.  The moon was beautiful in the Western sky when we left and the sun was slowly coming up in the East.  Our youngest daughter Jen helped drive...since I am still feeling tired and my very handsome husband does not drive in "The Cities."

Far Guy had a bunch of special tests...and we will not know the results for a couple of weeks. 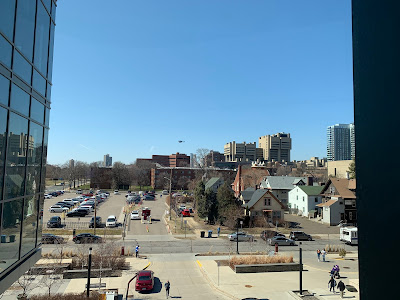 We watched a helicopter land on top of the hospital in the distance.  Someone was either having a really bad day or a good day (maybe a transplant organ arrived).   It was very windy and the helicopter took a very long time to land.

On the way home it was like a dust bowl just out of the cities, visibility was reduced due to the dirt in the air.    It was 79 F degrees  yesterday...and today the high will be about 30F.  March in Minnesota weather can do just about anything.

We stopped by Crafts Direct a huge arts and craft store in Waite Park Minnesota.  I bought some paper to make the owl May Baskets and one skein of scrubby yarn, a whirly gig and a pretty shopping bag.

Last of the big shoppers!   It was nice to be in a store again.  Everyone had a mask on.

It is good to be home.   We returned home before dark...Jen had to drive in the dark another three hours to reach her home.   We were so thankful to have her go with us!