Far Guy and I had an adventure on Monday morning.  He drove his new/old car and I drove the other car into town.   I followed along, he was cruising along about 53mph and then an idiot passed me when a semi was coming and passed Far Guy in a no passing zone..there are idiots amongst us.  Anyways we made it to our destination in one piece.

We left the new/old car and came home for a couple of hours.  They called and the new /old car was all set to go.  I waited in the parking lot for Far Guy to get into the new/old car.  First he had an extended conversation with the business owner...and then the women started showing up.  Older women complete with masks asking questions and laughing...Far Guy was laughing... I thought to myself he is now a chick magnet.

I waited at the edge of town...he had to stop and fill the car with the special gasoline.   It took quite a long time...then there he was!  Yea we can go home!  He pushed her into high gear and drove 60 mph on the way home.

When we got home he said "You know those old ladies? "  Yes, I saw them.  "They said that the car was a chick magnet!"  Exactly my thoughts.  "They had to be over 90 years old!"   They didn't look that old to me.  "The same thing happened at the gas station, lots of people asking questions oohing and ahhing." Were they men or women?   "Some of both."  If I croak you can just take your new /old car to town and find yourself a new gal...cause you are a chick magnet!

And the old gal...looks so much better without her snow tires that were manufactured in 1968.  The whitewalls are just perfect! 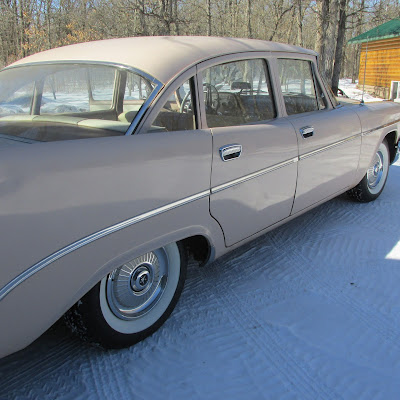 We are looking for someone to take care of some small rusts spots and take out a few small dents and repaint her.  All the Auto Body Shops seem to be real busy...we can get on the list for next winter...uffda.