Far Guy got the vaccination yesterday.  He called the local VA where he usually goes in Minnesota...they had no idea when and if they would get vaccinations....so he called the VA in Fargo North Dakota and got an appointment.

So we made the trip over.  The roads were a little icy in spots. They got a little snow overnight.

Elm Street in Fargo...when you drive down this street in the summer time it is like driving through a leafy tunnel. 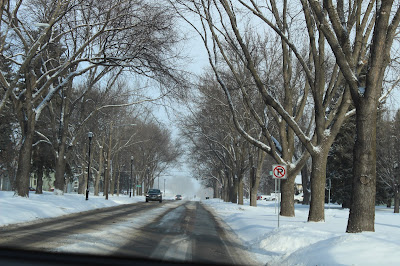 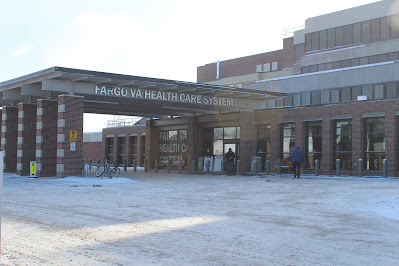 I stayed in the car...walked around it several times and stretched and had a nap.  He was out in about 40 minutes.  He reports that they could use better signage about where to go...but the Security Guards were helpful...too many people in the elevator for his liking... other than that they tried to keep Veterans about eight feet apart.  He said it was a small needle and didn't hurt...his arm is a little stiff hours later.

I packed an EPI in his backpack...just in case we needed it.

He got the Moderna Vaccine and has an appointment to go back for his second dose.

No news on a vaccine for me yet, they think it will be soon... at the Clinic in town and we will be notified by phone or email.  So we wait. Being 25% done is a start.

On the way home we stopped by Burger King...they were only doing take out...which was fine with us...there was a wait...but we had lunch for lunch and supper. So we called it a date day!

so glad far guy got his shot

I am so glad Far Guy got his vaccination. WI is really slow in getting the vaccine distributed. They are now saying 65 and over soon. But no time table yet. Most Assisted living facilities still haven't received theirs. And trying to get information is like pulling teeth. Hope all goes well for him.

So glad Far Guy got started on the vaccine, that's great news!

That's good news! I hope that the rest of the shots come in short order. Take care, stay well.

Congrats on that first dose. I am still trying to find out where and when I'll be able to get mine. :-)

Glad to hear Far Guy got the first shot. Like you, I am still waiting. I was too slow for the first batch that arrived in our county. My Ohio granddaughter got her first because she is working as a receptionist in a dental office.

That is really good news for FG to actually get that first shot. And how strange that the Minnesota VA couldn't even give you any possible date but the ND one could even give him the shot itself. My younger daughter works at the VA in Sioux Falls. She is an OT. They haven't even finished vaccinating their whole staff. She gets her second shot in about a week. So the VA isn't even on the same page systemically. Yikes!!

Sounds like a good productive day. I love Burger King! Let us know how Far Guy fares as the days go on, after his shot. I'd be interested. ~Andrea xoxo

Glad Far Guy got the first part of the shot OK. Hope he has no nasty reactions and it does the job of protecting him.

Those trees & snow are beautiful. It's amazing how something so beautiful can be so triecious. I slide into my parking space at work. That's a funny feeling. Yikes!

Such good news! I always loved driving down Elm Street when I visited my sister.

They say the Mondera is the best shot to get. Hope you get yours soon.

Good that your husband got his shot. There's not much going on here as far as shots are concerned.

I'm so glad that Far Guy is on the way to being protected from Covid. How did he feel afterwards? Hopefully you'll soon get it too. We're still waiting.
Blessings,
Betsy

We are trying to get scheduled for our shots through Kaiser Permanente, but the system is overloaded and keeps bogging down.

How wonderful! I'm so happy he was able to get it now. I hope yours will be soon.

His arm is a little stiff but other that that he feels just fine:)

That’s just wonderful! I’m so happy for you. We have been told that it will be “weeks” before vaccine will be available here. Our governor blames the hospitals who will be giving the shots for not being efficient in administering the vaccine and the hospitals say they cannot administer what they don’t have!

Good news! I hope you will be getting yours soon, too. :)

That's great that he got his vaccination

I am glad he has the shot.

Great to hear 25% of your shots are done - hopefully it won't be long before the other 75% are done as well :)

Wow ...far guy got a shot already! Hope he doesn't have any symptoms from it, other than a sore arm for a bit. Will you get the same kind? Does everybody need two doses of it? I dislike having to drive anywhere in the winter, but we have to head to West Bend at the very end of the month for my CT Scan and chest Xray. Doctor will call with the results the beginning of Feb. Pray for no snow Jan. 28th and 29th!!!

Well, I guess we all know where to go for shots now: head to North Dakota. Brrr! Glad Far Guy got his shot, and not really any side effects so far. But I'd think they'd find a way to get you to the front of the line, too, since you two live together. After all, those shots aren't 100%. Better that both of you are covered. Hope someone can work on your behalf for Far Guy's sake.

You must be relieved that Far Guy got his shot and hopefully will soon (?) get the second one. I haven't heard of anyone having side effects so that's good.

So far I guess everyone needs two doses, there is supposed to be one coming out that just is one shot by Johnson and Johnson. I have no idea when I will get mine...:(

Awesome! Congratulations to Gene! No word here yet but I qualify for sure when it comes in.

That's good! Dan and I got our vaccines yesterday. We also go Moderna. The line of cars leaving the small airport where we got our vaccine caused a major traffic jam and we were stuck in traffic for two and half hours. We were actually in the car for five hours straight.