Far Guy's first Desoto was a nine passenger station wagon.  At the Drive In Movie Theater you could back it in...get out and fold up the seat and get in the back to watch the movie.

I was along when the Highway Cop gave Far Guy a ticket for 92 mph...we were talking and driving along minding our own business...the local judge thought the car might have been doing 72.

I was also along the day her oil light came on and Far Guy was pretty bugged about that light being on...so I spit out my gum rolled it into a ball and stuck it in the round warning light...it did not make him feel  much better but at least he laughed.  I was just trying to be helpful!

Now for the Explorer part.

A question from  a friend;

So this winter will you drive it or store it?

As I remember Desotos hate winter.  If they start they may just drive off on their own .... do you remember that?

A friend does have a good recall;

Yep was winter time colder then shit. I was driving my brother's red dodge cornet..  Heading down hwy 34 and saw the sea foam aircraft carrier parked in front of the citizen national bank with the motor running. One could do that back in the old days.I thought i would just pull in behind and wait for you to come out. As I started to pull in The Desoto slowly drove off.  Thought shit I missed him then noted no one was in the car. I parked got out and ran after it thinking i would hop in and hit the brakes.That thing went down to the alley way, made a left turn across the oncoming traffic lane and perfectly into the alley, went a few feet and stopped.The part I don't remember is if I hopped in and hit the break or if it was locked and it stopped on it's own due to the deep snow and me hanging on to the door handle swearing.Anyway ran back to the bank and you and your dad where sitting at a desk and I told you our car drove away.  You mumbled something about it sometimes slips out of park or something and went out to get it.  I would have been more freaked out but you seemed awful casual about it.

If that happened to me it would have run over a group of small school children or something on that order. Far Guys reply was:

You have a good memory.  One of the problems is there never was a "park" same with this one.  Emergency brake was  suppose to be the park brake and that only worked if it was adjusted right.  Cold as hell which I think made the fluid thicker and so despite it being in neutral it had enough to move the car.

Fun for me to hear this story as it was one I had not heard before...it truly was an Explorer! . 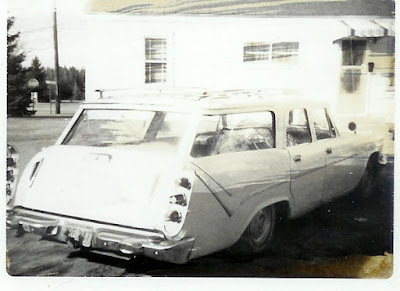 1959 Desoto Explorer Station Wagon...Sea foam Green or Willow Green or Spring Green or Birdshit Green...photo taken about 1970.  Far Guy sold it in 1972 for $100  We are not sure of the purchase price when Far Guy's Dad bought it from Bob and Mary Harris in about  1966.