I was away for 40 hours.  Granddaughter Paige and I took a flight from Bemidji Minnesota to Louisville Kentucky.  Travel trip...do not wear a shirt with sparklies on it or you will alarm the system and have to have a wand search and then a pat down and residue swab on your hands.  Who knew?  They took Paige's toothpaste because it was too large.

We had a lay over for a couple of hours in Minneapolis /St Paul.  The plane from there was a hunk of junk and kept making noises and you could feel vibrations and hear clunking noises under my feet.  As we landed in Louisville several streets were blocked off with cop cars...the lights were quite visible late at night we had no idea that riots were happening there and there was a 9 PM curfew as we traveled out of the city with Far Guy's sister and brother in law amongst very little traffic on the freeway.

Thursday morning our oldest daughter was released from a hospital there and Paige and I drove 13 hours and delivered her safely back to the town where she is living.

Far Guy drove 3 1/2 hours in the early morning hours to pick up Paige and I.  Paige kept her grandpa busy talking and helped him watch for deer while I slept and reportedly snored in the back seat...only awakened with a charlie horse behind my knee.   After Paige was delivered safely to her apartment I completed the drive home.

It was a quick trip...however it was nice to see Far Guy's sister and brother in law and our niece who lives in the area.

Everyone wore masks in the airports and on the plane we were all spread out inside the aircraft with spaces all over...capacity was about 25% of normal.  They seated everyone in the back of the plane first row by row so no one had to walk by anyone else.   I believe that exposure was minimal...at least we hope so.

On our way back through Indiana, Illinois and Wisconsin everyone wore masks except a couple of people in a McDonalds in Indiana.

Far Guy and I are both tired of driving and missing sleep.  Far Guy could not travel on the airplane due to his oxygen requirements and his weekly infusion.

I came home to a carpet of newly fallen leaves so the second mulch of the season was completed...I would rather drive the lawn mower around for hours versus a car any day of the week.  Far Guy estimates that 1/3 of our leaves fell out of the trees while I was gone. 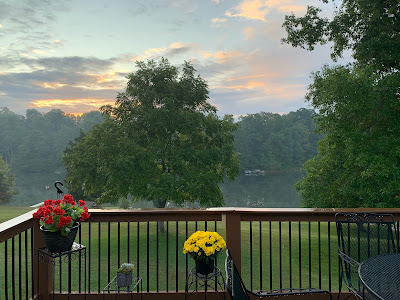 It is good to be home.