I have a friend.  His name is Eric.  I see him every grocery shopping day.  He works until 4 o’clock.   He bags groceries, or sweeps the floors…he doesn’t like sweeping very much but he gets it done.  Sometimes he wears a bow tie to work, Eric is short, he has light brown hair, sparkly eyes and a big smile.

I always look to see which checkout he is working at.  We have a “thing”  I don’t like my bread in a bag, I like it seperate and put in the front of the cart…Eric knows this and has known this for years.  Often times he jokes with me and says “What would you do to me if I squished all your bread in one bag?”  He often answers my glowering look  himself with “Guess I don’t want to find out.”  Often he will stop the cashier in her tracks if she starts to put my bread in a bag.

I think he waits for us on grocery day, one day we were a little late and he was on his way out the door…he said “Ya know I only work until four.  You should come earlier.”

Sometimes he is on cart duty, retrieving the carts from their corrals. This week as I got out of the car in the parking lot at the grocery store Eric met me with a cart.   He said “I figured you would be needing this.”  I said “Thanks Eric you are a doll!”  he said “I know and I think you are pretty special too.” So I gave him a hug!

Sometimes Eric goes to the East Coast on an Airplane to visit his family.  He usually tells me when he is going and when he will be back.  His parents used to live in Park Rapids but they were elderly and needed to move in with Eric’s sister.  Eric stayed behind, he has his own house and his job.  He takes his job very seriously.  I am sure that he is never late for work. I am not sure that his employers know how fortunate they are to have Eric working for them. 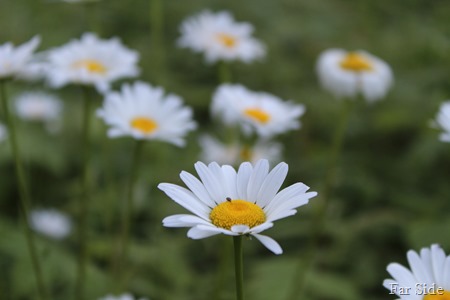 Eric has Down Syndrome…an extra 21st chromosome…one that makes him extra special.

I love this story! It's a shame more of us can't be like Eric. He appreciates his job and loves his work. He appreciates your friendship too. He sounds awfully sweet. There is a young guy working at the grocery store here who likes Poppy a lot. When he need something, he goes back to the meat department to ask Poppy.

Fantastic story. Eric is very fortunate to have you as his special friend. We need more people like Eric in this world. I bet his employers feel they are lucky to have him working for them - a hard working loyal employee. Thank you for sharing this story with us.

Thank you for this story. It is nice to hear about kindness and love in the world. Eric sounds like a great person to know.

I like to think that Eric would be my friend, too, if I lived nearby. Thank you for the lovely word picture of him and his life. :-)

Beautiful!! When we lived in the Fox River Valley, I also had the privilege of having an "Eric" as a bagger in the grocery store where I shopped. Thanks for the great memory of him!!

Ditto for your comments about Eric. We seek him out when we shop at the store. I have often thought that Eric should teach the rest of the store personnel how to bag groceries. They could all take a lesson from Eric in good customer service practices. He is a gem!

As you were writing I wondered if that were the case. I'll bet many people love to have Eric help them out. My great niece works at the local hardware store. She works in bookkeeping and is in charge of making sure all the envelopes have stamps, the bills are inserted correctly, and the labels on the outside are neat and correspond with the bills. She LOVES it!

We could all learn from the Erics in the world. Thank you for sharing this lovely story and your wonderful friend.

I like Eric's work ethic! He takes his job seriously enough to remember how you want your bread. He's doing his part to make the world a better place.

Eric sounds like a great guy. I loved his comment to you and FarGuy as he was going home after his shift. He obviously enjoys his job and his favorite customers.

Thanks for this tribute to Eric. It was a great start to my day!

Some of the Down's syndrome people are very special. I posted on my guy this summer. He bags groceries and delivers papers.

Brings tears to my eyes. I knew before you said so, that Eric was special. My sister's DS boy would be 21 this past year if he had lived. I think he was pretty special too.
God bless you for loving Eric.

Nothing like a smiling face and a helpful attitude to make shopping a little less odious! Good job, Eric.

Yes indeed you have a special friend! He sounds like a real sweetheart!

Great post - Eric is a good guy! I have often wondered what happened to his parents - remember seeing them around town years ago.

You two have a great relationship. It speaks well of both of you.

Sweet story! There is an 'Eric' at one of the grocery stores in Oliver. He too takes his job very seriously. Belated Happy Birthday to Far Guy!

What a great man and great employee! If we could all be as great as Eric the world would be a better place. Tell him he has a fan club now!