This weekend is an All School reunion in Park Rapids, Minnesota.  Anyone that graduated from High School there is welcome to attend.

Far Guy being The Class of 1968’s babysitter has worked on his class scrapbook and brought it up to date.  A classmate of his dropped off a photo that she found recently. 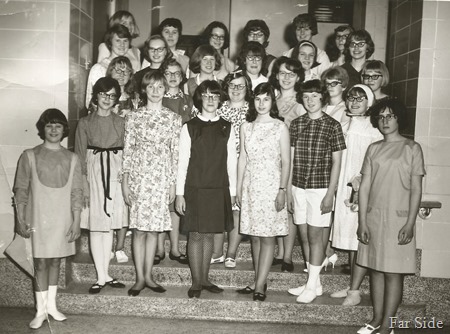 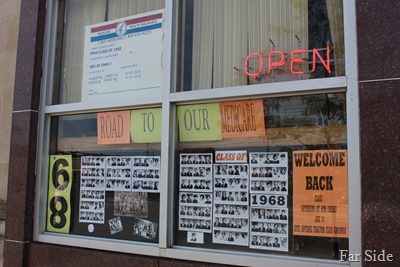 Far Guy ordered a cake that looks like a Medicare Card.  He made all the arrangements for a meeting place and has banners to put up…etc. All the details have kept him busy.

I invited a former classmate from Texas and his wife out to lunch the other day, ham sandwiches, salad and fruit…I even used the good blue plates and real napkins instead of paper towels.  They are RVing it for a few weeks and were appreciative of the lunch invite.   We knew each other in High School and were friends, since then he and I managed a web site for our class…which finally became a Facebook page.  He has not been back in the area since 1979.  We had a good visit.

I am going to help out with photographs for the Class of 1965, and then come home.  There are way too many people in town this weekend for me.  The only thing my class has planned is to decorate a pontoon for a flotilla on Sunday afternoon when it will be 90 plus degrees.  The rest of the reunion weekend with beer and music so loud you cannot visit just doesn’t appeal to me.

It is our daughter Trica’s 25th Class Reunion.  They have a party planned at the bowling alley/eating establishment.