The flags were changed yesterday at Bunker Hill.  The tradition continues, Howard said yesterday “I will go on until I cannot, I know it sure helped me so my hope it that it helps other Veterans too.” 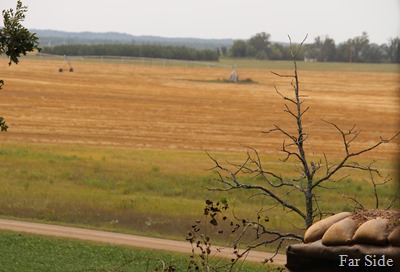 The view from Bunker Hill looking over the prairie.  There was smoke from the wildfires in the air enough so that it blotted out the sun. 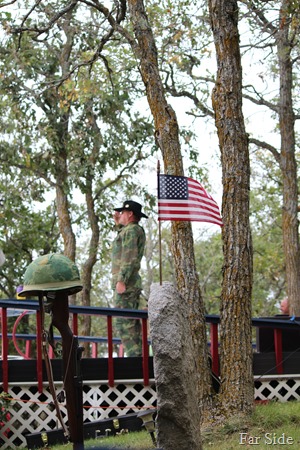 The flags were collected and fresh ones put up one by one.  Some of the Veterans are getting older and it was windy. 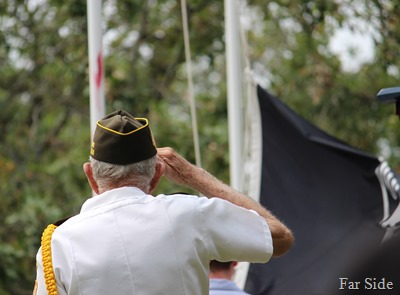 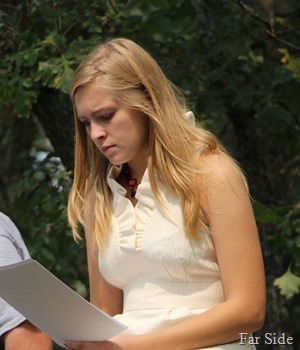 My cousin Scott’s daughter Bailey read one of her original poems about a Veteran.  Bailey is involved with the BentProp Project which tries to return the remains of Missing In Action Veterans to family. 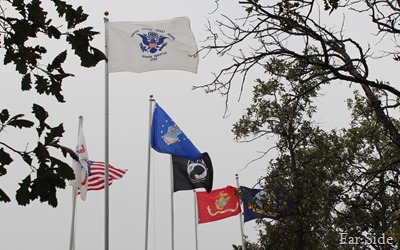 The new flags will fly on Bunker Hill until next August.

The old flags were burned properly as indicated by flag disposal rules.

There were many old people in attendance.  There was a people mover and several golf carts that moved people up and down the hill.  We took a ride up but walked back down again.  Trudy serves a picnic after the “doings” but we didn’t stay.

Although Howard is a Marine and a Vietnam Veteran, Bunker Hill honors all branches of The Armed Forces and all the Wars/Conflicts.

What a lovely tradition to continue.... I hope younger folks carry it on in the future.

That second picture is touching. I love anything patriotic and would enjoy being there.

This is a wonderful post, learning about young people who are dedicated to honoring veterans. Makes me proud. :-)

We old people are the patriotic, we were raised that way.
I was thanking the end of the yard next to water boys fence would we a good place for above ground pool
with lots of 7 and 8 year old girls scream with delight. And if they ever let the water out oh boy!

Hopefully, some younger veterans and their families will take on some of the responsibility to keep this important site maintained.

What a nice tradition. I, too, hope some young people will step up and step in so those who have been doing it for so long can know that it will be continued.

What a great memorial and tribute. I would have stayed for the picnic...all that good homemade food? You betcha!

It is placed on a beautiful hill in Minnesota. It is so great that it is continued as a tradition. My dad would have loved to attend something like that. Changing of the flags seems to be an effective process to commemorate the past.

This is such a touching annual tradition--both the ceremony and your writing about it. Thanks, Connie.

What a lovely event to attend - love the ceremony of it all too!

Thanks for sharing this lovely ceremony.