I knew the headstone had to be someplace in that cemetery.  Sometimes the names run all together in my head.  Good thing the cemetery is just a mile down the road.  Now that these graves have been “found” we will put flowers there too. 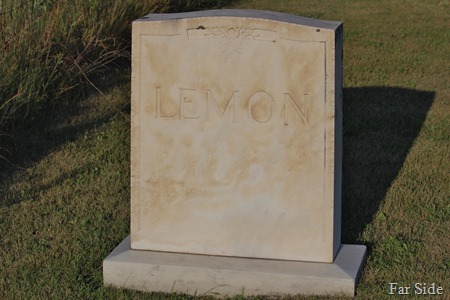 This is the headstone for Robert B. Lemon and his wife Martha E. Lemon.  They are Far Guy’s Great Grandparents on his Mother’s side of the family.. 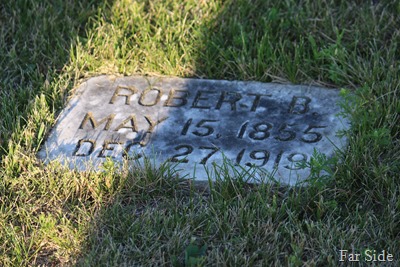 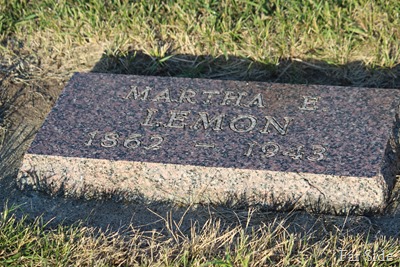 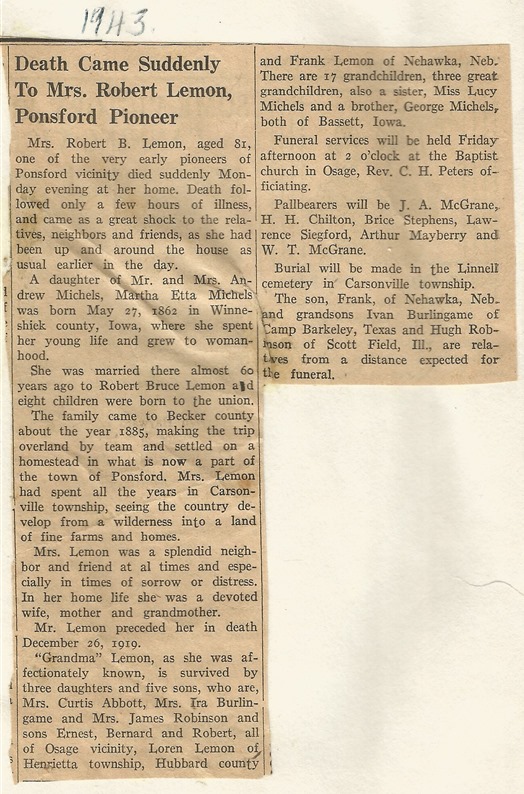 Mrs. Robert B. Lemon, aged 81, one of the very early pioneers of Ponsford vicinity died suddenly Monday evening at her home.  Death followed only a few hours of illness, and came as a great shock to the relatives, neighbors and friends, as she had been up and around the house as usual earlier in the day.

The daughter of Mr. and Mrs. Andrew Michels, Martha Etta Michels was born May 27, 1862 in Winneshick County Iowa where she spent her young life and grew to womanhood.

She married there almost 60 years ago to Robert Bruce Lemon and eight children were born to the union.

The family came to Becker County about the year 1885, making the trip overland by team and settled on a homestead in what is now a part of the town of Ponsford.  Mrs. Lemon had spent all the years in Carsonville Township, seeing the country develop from a wilderness into a land of fine farms and homes.

Mrs. Lemon was a splendid neighbor and friend at all times and especially in times of sorrow or distress.  In her home life she was a devoted wife, mother and grandmother.

“Grandma” Lemon as she was affectionately known, is survived by three daughters and five sons, who are Mrs. Curtis Abbott,  Mrs. Ira Burlingame and Mrs. James Robinson and sons Ernest, Bernard and Robert all of Osage vicinity, Loren Lemon of Henrietta Township, Hubbard County and Frank Lemon of Nehawka, Neb.  There are 17 grandchildren, three great grandchildren, also a sister Miss Lucy Michels and a brother George Michels of Bassett, Iowa.

Funeral Services will be held Friday afternoon at 2o’clock at the Baptist church in Osage, Rev. C. H. Peters officiating.

Burial will be made in the Linnell cemetery in Carsonville township.

The son Frank, of Nehawka, Neb and grandsons Ivan Burlingame of Camp Barkeley, Texas and Hugh Robinson of Scott Field, Ill are relatives from a distance expected for the funeral.

Well that obit answered a few questions from last week.  Robert’s middle name was Bruce…and here I was expecting it to be Bonaparte!

I did not recall that they lived in Ponsford proper.  I know they lived just down the road from us about two miles, they farmed and the bachelor boys Ernest (Ern), Bernard (Bundt)and Robert (Dave) had a sawmill there.

From Ethel (Burlingame) Kivinen (a grandaughter) April 2009.  Ern, Dave and Bundt were bachelors and they never married.  They continued to live on the Lemon Homestead (Located South of Hwy 225, and 3/4 mile west of the Linnell Cemetery)  They had a sawmill at the farm, they farmed and took care of their Mother.  One day Dave came walking across the fields to the Burlingame’s (Amy and Ira)  Dave said “Amy needs to come home to help take care of mother.”  The next day they up and moved.   Ethel says “Grandma Martha was a heavy lady.  Grandpa Robert died of Cancer a long time ago in 1919.” 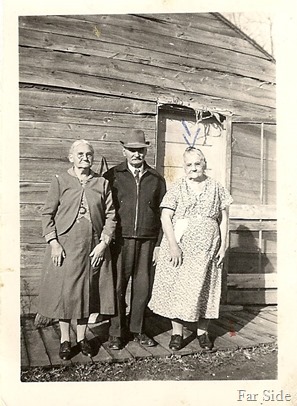 Martha is on the far right.  I don’t know who the other people are?  Could be neighbors or friends or it may be her sister Lucy and brother George from Iowa. 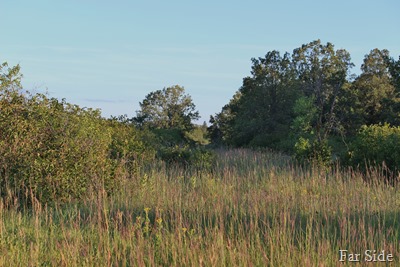 The lane going to the Lemon Farm.  I remember when it was a two track road, I used to watch out the bus window every morning on the way to school. 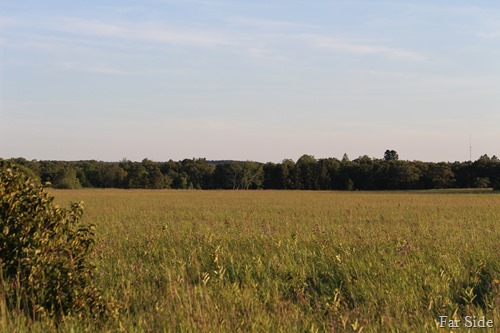 The farmstead was in the center of this photograph.  Far Guy says he can remember when the foundation of the barn was still visible.

So glad you found their gravesite. Our departed relatives need to be remembered.

It must be really nice to have your ancestors s close by. It is so different from my family that grew up all over the place. I enjoyed the obit and thought how different they are today. It made me wonder who wrote it for her. :-)

You found the graves! It's so nice that you will put flowers there. I am always touched by the extent to which people are willing to go to find the resting places of their ancestors. I rather like old obituaries.

We have friends (a couple) who do extensive family research and go to cemeteries to find tombstones of relatives.With the trend now toward cremations, that will some day be a lost project.

Wonderful to have found the graves. It is great that you will be able to be able to put flowers on them. I am just now starting to try to find out more about my grandfather that was in WWI. I don't have a lot of information.

I wonder if Lemon is an Americanization of a foreign name. It seems unusual for Minnesota of those times.

I loved every minute that I looked for ancestors.

Your history posts always set my brain thinking. I had to think about who my parents great grandparents were. All on my dad's side are in the same cemetery. On my mom's side one set is in the Moon cemetery in Macksburg, Iowa. One great grandfather is buried out in Illinois, I think in Cuba, Illinois. The great grandmother remarried and is in a small cemetery where I have never been in Iowa. We had a local guy die the other day and he was a relative but I am thinking it was great grandmothers were sisters. I get too tired to figure it all out anymore. I am glad you found the rest of the family, and not so far away.

I forgot to add that they definitely look like they are from Iowa, ha......

Wonderful piece of family history there and I am glad the graves were found and now can be visited and or have flowers put there ! Lovely post and photos . It is amazing how fast the land changes though isn't it ? ! Thanks for sharing , Have a good day !

The early settlers lived a tough life and enjoyed every minute. It's great that you go back and put the pieces of their lives together.

This is a wonderful thing you are doing.

Interesting. I love a well written obituary. These relatives look like pictures if my Iowa relatives!

An interesting post. I'm glad you found the gravesite.