Home infusions can be an adventure.

Some days are even a tad exciting.

I opened a long handled sterile swab and it flew out of my hand; it seemed like it did a double loop in the air hit the fridge and then the floor…not so sterile anymore. There is no five second rule with sterile “stuff.”  Well that is why they make alcohol preps and I had lots of them.

Did ya know that a product called skin barrier…which helps protect your skin from the adhesive also sticks to your sterile gloves?

If you have the needle pointed at the port target a bit too much at an angle it won’t go in…stops just like that…I had heard this could happen… OH Lordy…I eased off the needle just a bit and pointed it downward…in like flynn.

We are clamp stupid…both of us.  Yesterday we tried to start the IV and it just sat there…clamps…there are two of them….we are idiots sometimes. Far Guy was just about ready to start cussing.  We did the same thing when it came time to push the saline…clamps won’t let you push in even a drop. Clamp on..clamp off.

I am training Far Guy how to mix the medication…it takes about an hour. Then it takes us about 45 minutes to do the infusion itself.  We don’t answer the phone when we are in the infusion process. There are enough distractions to deal with…making sure we follow sterile procedures as much as possible.

If you know of anyone struggling with chronic bronchitis or early onset emphysema they should be tested for Alpha 1 Antitrypsin Deficiency.  If Far Guys deficiency had been caught earlier he wouldn’t have so much lung damage.  The blood test is free…I had it done…our daughter Trica and our granddaughters are awaiting their results.

Far Guy gets real tired after the infusion.  He got an injection of Kenalog which helps with the shortness of breath.  That injection can last up to three months…BUT the Shot Nurse in the local Clinic didn’t know where to administer the injection…so she gave it to him in his arm…instead of his buttocks…where there is more muscle and the shot lasts longer.  Go figure you would think a Shot Nurse would know a thing or two or three. I was D.I.S.C.O U.R.A.G.E.D.

We are trying to do the best we can…and don’t need inept help…we are inept enough on our own. 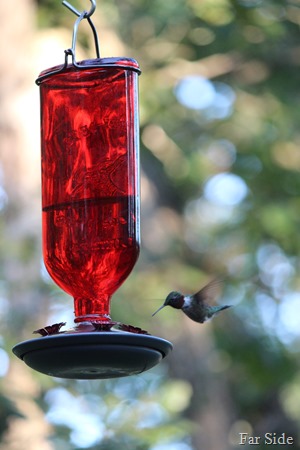 I think you are doing amazingly good with all this. Both of you. Sending hugs. B

Those things do get easier as time goes on and I bet it will seem routine someday in the future. Be brave -- you're doing great! Love the vibrant colors and the hummingbird in action. Great photo!

I sure wish you both didn't have to go through all the inept stuff! Glad your test come out good. Hope the kids are just as lucky. Prayers, and sympathy for all the trials and tribulations.

I am so very proud of you both for doing these infusions on your own. Things will get easier as time marches on. Sorry you have to deal with inept people during this time. Just know we are all here for you, cheering you both on. Have a great weekend.

What Linda said. I am just amazed that you two have become as adept at this as you have. After all, your training was only out of necessity, not because you wanted to learn this procedure. I can't help but wish FG had learned of this earlier, but you can't change the past, only march on and move ahead. :-(

The learning curve is a wild one, but soon you will be pros.

I applaud you both for your courage and willingness to do such hard things. What you have to do is so hard and so serious and you are doing so well at it. Few would attempt this much less be able to do it. Bless you both.

I'm sure it can be discouraging and difficult to administer, but also nice to be able to do these infusions in the comfort of your home. With more practice, I'll bet you'll become a pro!

It will get to be old hat procedures after while. Opening and closing clamps is a problem I watched the other day with the nurse doing our friends chemo treatment. They have to flush the vein and she was doing the twice over to figure it all out so it was flushing her vein and not dripping into the chemo bag. Stay tough you two. Lungs getting better or not catching stuff is very important.

I know about the scary and discouraging stuff. After an abdominal surgery to remove a sarcoma, it got infected and I had to repack it daily. The first time I had to go nine inches deep I was shaking. Fortunately she was solid as a rock and kept encouraging me. Life goes on we do what we gotta do.....;)

It won't be long that this will be second nature to you. I applaud you for learning to do this yourself. As we know, as we get older that learning curve gets a little steeper.

Gosh, I'm so impressed with the both of you. I know I would have to learn how if it were me, but it sounds daunting and scary.

I can't imagine what you go through every day. Blessings to you both.

Big deep sigh....... It will get easier as time goes on and I do hope FG is noticing improvements from the treatments.

God bless you both. I know it is very stressful for both of you. Mis-steps by the shot nurse would not make me happy either - she should have known where best to give the shot for the best possible outcome. I am on a blog break from posting - not much going on here. I'll still be commenting here though. Love you all.

Poor Far Guy!
Hugs to you both

Nope no improvements...but the treatments are just supposed to stop him from getting worse.

It all sounds incredibly difficult and exhausting. I hope it all becomes easier for you very soon.

As we age we have to learn some pretty complicated things. One wonders if your shot nurse can rad? Instructions aren't that far away and it would be on the net. Some people just don't think hard enough.

You are dealing with this new adventure that life has thrown at you very well. We are all impressed. It's good to know all of us old dogs can still learn new tricks if we have to.

It's such a daunting process every week, isn't it? I don't blame you for not answering the phone. You are very strong folks! I was wondering if anyone in your family was going to be tested. I see that they have. I wish them all the best results.

Funny you added that photo at the end. Bet that hummingbird knows just the right angle to maximize getting its needle in the port.

Like you I would have thought the SHOT nurse would know what to do...and if she didn't she would have researched until she did! GRRRRR..

Oh, man....Hugs to you both. Wishing you smooth sailing with this adventure.

Hang in there. You'll be pros in no time!