A long, long time ago there was a summertime eating place in town, over on east highway 34.  It was called “Dixie Drive In.”  It was a fun place, all the teenagers hung out there or on Main Street in front of Schmiders.   Sometimes we drove back and forth between the two spots… up Main Street for three blocks make a U turn onto the other side of Main Street and back out to the Dixie.

The Dixie had car hops they would take your order and then you would roll up your window a bit and they would hang the food tray on your car window.   Jolynn our neighbor used to be a car hop at the Dixie from 1963-1965…they didn’t make much an hour she said “We started off at 50 cents and hour and after three years I made 75 cents an hour, plus we had to pay for any food trays spilled.”  One time a June Bug landed on her face while she was about to put a tray on the car window…the food and drinks went all over on the people inside the car.  Funny now but not at the time.

Cars were parked on either side of a center walkway.  There was probably room for 16 cars under the canopy…rain or shine you could drive in!

It was a place to see who was with who…a bit of teenage gossip. “Can you believe he is with her?”  Laughing, talking, visiting back and forth, climbing into someone else's car just to talk…radios playing on a warm summer night….cars starting up and leaving or cars cutting their engines and coasting in…arriving.

A hamburger and a chocolate malt…that was my favorite meal there. 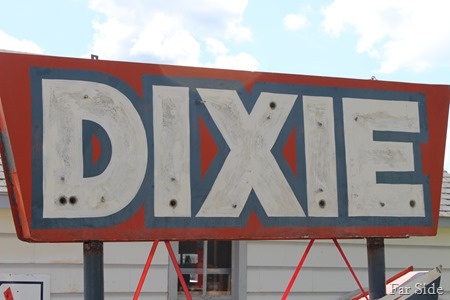 Far Guy liked the hamburgers and the tator tots.   We took our children there when they were little.  I ordered some onion rings…Trica was convinced that they were boogers.  In later years it was a walk up place your order and hang around the window until your order was ready.

The signs showed up this week at Dickie’s place and we stopped and asked if we could take a photo. 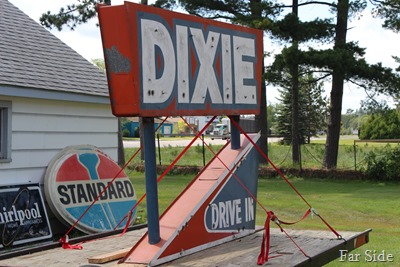 The Dixie is only a memory now…a good one!

I remember those car hop places. In the forties my mom and aunt worked as car hops at their father's (my grandfather's) restaurant. They were both really cute so it increased business. Good memories you shared here. They brought back many for me, too. :-)

Carhop drive ins -- great memory! Ours was the "Toot n Tell" but really you were encouraged to flash your lights for service instead of honking your horn. I went there on my first date after a school dance for a hamburger and a root beer. How fun you were able to photograph the old sign.

We had a place like that in Woodstock where I grew up. I think it was an original A&W.

Oh, my...that does bring back memories. For us it was the A & W and the Dog and Suds drive ins. We cruised through one, then on to the other, stopping to visit with friends, etc. I don't think they liked us very much when we didn't stop to spend money.

This brought back so many fun memories. Once my sister got her drivers license we hung around Neal's Grill, our favorite! Curb service and a jukebox outside on a concrete slab where we could dance. We got into trouble more than once for coming home late. You described it perfectly! Climbing in and out of each other's cars!

We had a place like that too, can't remember the name. And of course we "cruised" the mile, not unlike American Graffiti.

What a wonderful memory.

At least the signs still exist and may have more history to add.

Can you believe it -- we still have drive-ins like that around here!!

Oh that sounds like such a fun place! Too bad drive ins aren't around any more (at least not where I live)

I love your memories and how fun to have located/photographed the old signs. Sounds very much like our old Dairy Queen, a local hangout years and years ago. Main Street eventually took DQ!!!

You really nailed this one. Many people will elate to this post. The same thing happened with me but it wasn't the Dixie.

I actually know two Dixie people in my world. One was a farm neighbor and family friend and the other lives here in this town. I always thought it a strange name especially when people whistle Dixie. I like you memories of old. They seemed like yesterday only we didn't have one. We did have an AandW in the big town where my brother met his wife 53 years ago. My wife had a bowling alley where everyone hung out with great tenderloins.

Car hops and trays that hooked onto windows.....you've really brought back memories for a lot of us with this post.

The pickers would LOVE to buy those signs, I'll bet!

The Dash-In was a similar place in Riverton, and teens dragged Main from there to Chopping's Cafe (about two miles) and then back up high school hill. Good memories.