The infusions once a week are going…some weeks better than others.  Have you ever prayed for a blood return?  WELL I have after the day all went well and saline went in just fine…but there was no back flow of blood to assure me that I had the needle in the right spot in the port.  I had Far Guy move his arm around…with the second syringe of saline Far Guy got a blood return.  We called the gals at the Infusion Center…they said everything should be okay.

Through some research I found out that some people consistently have no blood return from their ports but their infusions go just fine.   Some people have problems because they are dehydrated.  The next week I encouraged him to drink LOTS of water, I didn’t care if he floated away…and yes I got a blood return…see water and prayers will go a long way.

Our daughter Trica the Nurse Practitioner said “Mom as long as the fluid goes in you should be fine.  When it doesn’t go in…then you have a problem.”

At the time I did not have any extra needles either…now I do… I complained to the Pharmacist and now I have two extras just in case I have to stick him again.

I wish I knew what the problem was exactly.  But I can only speculate.  It really really threw me off kilter for a few days wondering what I could have done wrong…and could come up with no answer.  I went through it all in my mind a hundred times.  I was a wreck.

The next week everything went just fine.  Go figure. Must have been all those prayers I said continually during the night before the next infusion!

Is Far Guy better?  No, but he is no worse and he has not been sick since we began the infusions.   He is walking 2+ miles a day…some days the dog doesn’t even want to walk that far with him…Chance knows the way home.  Far Guy keeps everything recorded in a little black book; steps walked, oxygen saturation levels and his temperature.  His temperature is important…and unexplained temperature can mean that his port is infected…even though I wear a mask and gloves and do everything as sterile as possible  an infection could happen.  I try to feed him really well with lots of fruits and vegetables…and encourage the water drinking.

Trica’s genetic test results are back, she is a carrier of Alpha 1 Antitripsin Deficiency, she is a MS (the M from me and the S from her father).  So far Maddie and Paige are not carriers they are MM’s …one M from their mother and one M from their father.  That was good news.   Trica being an MS most likely produces enough of the protein to protect her lungs from destruction.

The genetic testing is free, South Carolina Medical University sponsors it I suppose they got a grant to do a study.  Since it is a very rare disorder not many people know about it. 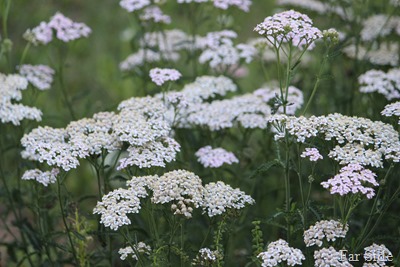 Yarrow in the wildflower gardens August 24 2015

Update: Savannah’s test results are in she is an MM just like her sisters and just like me thank goodness!

I am so proud of you for helping Far Guy with his infusions and not panicking when something doesn't go the way it is supposed to.. I just don't have it in me anymore not to panic. I am sure as time goes on you will learn all the little things that can happen and will be a pro at it. I'm just glad Far Guy is doing so well.

Walking a couple of miles a day is wonderful news. I'm sorry to hear that Trica has inherited the gene, but hopefully being aware of it she will know if she develops symptoms just what to do. And you are doing the best you can, and then some! I'm so glad that he's got you! :-)

You are doing a great job. And being extra cautious and worrying is just part of it when you are caring for someone you love.

Hang in there my friend. You are doing a fine job and Far Guy is very lucky to have you!

You and Far Guy are impressive. Life throws things at us that we could never anticipate. There are those in our family with unusual health issues but different from what you two are facing. Both of you are in my thoughts often. I am a firm believer in prayer and meditation.

I'm thrilled that the infusions are keeping the Far Guy healthier. It's good that you started the infusions BEFORE winter and all the nasty viruses are going around. This winter will be the real test.

Also thrilled that Maddie and Paige are "out of the woods." Will they have to retested when they are older?

You are a brave woman doing this!
I got all the things packed up and off even the bookcases, that you were telling me
I should do. Thanks

I was wondering how that was going. I am sure Far Guy has nothing to worry about with you taking care of him. It would be much worse for him to go in and be exposed to hospital/clinic germs. That would be risky! I think the only reason I stay so healthy is because I stay away from people for the most part. Walmart every 2 weeks but other than that I don't visit anyone and no one comes here. My family once a year but that's it. I've been very lucky since my immune system is pretty much compromised. I hope it continues to go well for both of you and I'm sure pretty soon it you'll be able to do it in your sleep. I felt that way at first when I had to give myself my Enbrel injections but now I think nothing of it other than to find a place where there isn't scar tissue and no veins. Your procedure is a little more complicated though. Good for Far Guy walking and drinking more water.....we all need to do that!

Yowsa! You do have nerves of steel and yup, prayers and water are important! Glad FG isn't worse but am hoping he'll be better!

No once the alleles have been determined they never change. They are what they are forever.

I don't know if I could do what you are doing. Very good. I hope Far Guy starts to feel better. HUGS

Good news on the girls! Glad to hear that Far Guy is able to walk 2 miles. Weird that Chance wouldn't want to go that far sometimes:) Yes, water is a wonderful thing. Helps prevent strokes too. We have been trying to get at least 8 or 9 cups into us lately, as we know we weren't drinking enough. Do a lot of runs to the bathroom:(

I never had a problem injecting myself, but I'm not sure I could do it to someone else. You're a brave lady.

I think that both you and Far Guy are heroes. So glad that you have an RN daughter to consult at times. Also glad about the testing results for your daughters. What a wonderful family you are and have!

How good Far Guy is walking so far each day, and that you are able to give him the infusions. I would be panicky too if it didn't go just right; you are doing good to persevere.

When you'e untrained and doing treatments like this it can be very stressful. It looks like you did a good job.

The distance from the end of the port to the tubes entrance to the vein may be a long distance. I maintained one for my late wife who had a port for chemo. Thirty years ago they were just concerned that the fluid went in and I think nurses did the drawback so the doctor had the info even if the doctor did not see that it was done. I bet you are doing a great job and it is good that nothing more is going on with the damage to the lungs.

I think you both are doing a fine job . I haven't heard of this before till you posted it all about Far Guy having it . I am glad you all are doing good and that the girls haven't inherited it . I can imagine how exhausted you all must be at the end of each day . I pray for you all and hope things get better and a bit easier on ya all to ! Thanks for sharing . Have a good day !

I do not know if I could do those infusions. Sounds like you are doing a great job.

You're doing great. You're very brave. It is amazing sometimes what we find out we can do with God's help. I work on a journal for heart and lung transplantation, so I have heard of alpha 1 Antitripsin Deficiency -- it is one of the indications for a transplant. But it sounds like Far Guy is doing OK. Prayers for both of you

Wonderful news for your granddaughters and daughter. I'm sure it's a relief for your family to know the results. Such a stressful process. You're doing great!

That is good news for the younger ones.

I admire you both very much to do that yourself. I'm not sure I could. Well wishes.

Constants and complexions. I don't envy any of this. I did the caretaker once on a deep deep abdominal infection after a Mayo surgery which scared the crap out of me packing it until it healed inside out. We do what we have to do scary or not. Good luck, Connie.....

Good news on the girls! Glad to hear that Far Guy is able to walk 2 miles. Weird that Chance wouldn't want to go that far sometimes:) Yes, water is a wonderful thing. Helps prevent strokes too. We have been trying to get at least 8 or 9 cups into us lately, as we know we weren't drinking enough. Do a lot of runs to the bathroom:(

You have been put in a position of having to do something very stressful and difficult and you seem to be doing amazing.

That is good news for the grandgirls :) and that family is aware. Wow - I am happy you can do the infusions (I don't know if I could) - needles / blood not a good mix for me. That is great that Far Guy is walking 2 miles - I think I should be joining him.

This has been a difficult learning time for both of you. The burden of responsibility is heavy upon you. It's good that you can get help on the other end of the phone line.
Staying hydrated will be very important. And of course we all know that walking is a very good thing.
Blessings on you both. You are making it. And good news about most of your daughters.

God gives us the graces we need. You are doing fine, and I'm sure your husband appreciates it.