One set of Far Guy’s Great Great Grandparents were Lemons.

Both N.B. and Lucretia are buried in Linnell Cemetery just down the road from us.  Sadly I have no old photos of them. 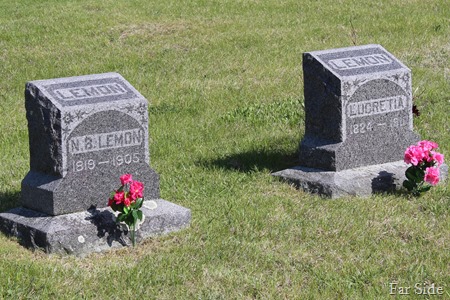 Napoleon and Lucretia were married possibly in Indiana.  They had seven children.

Zackary Taylor Lemon September 27 1948 in Monroe Wisconsin.  He died October 1, 1929.  Married Sarah Jane Slanaker.  She was known as Aunt Janie. They moved to Carsonville Township in October 1880 from Deerfield Township, Chickasaw County Iowa.  They were one of the first three white families to settle in this area. They had one child.

Phoebe Jane Lemon born November 27, 1849 in Monroe Wisconsin. She died November 13, 1936.  She married John Snyder/Schneider/Snider…John was a Civil War veteran.  They came to Carsonville Township with Zach and Aunt Janie. They had twelve children.

James Riley Lemon born November 16, 1851 in Monroe Wisconsin, he died August 2, 1921.  he married Thena Susan Grant.  They moved to Carsonville Township in 1886. They had twelve children.

Robert B. Lemon was born May 15, 1855 in Monroe Wisconsin.  He died December 27, 1919.  He married  Martha Etta Michels.  Martha was born May 27, 1862 in Winneshiek County Iowa.  She died July 19 1943.  They had eight children. (One of which is Far Guy’s Grandmother Almeada Clara) In 1885 Robert and Martha were living in Basset Iowa but in 1887 they are living in Carsonville Township, Becker County Minnesota.  I wonder what the B. stood for…maybe Bonaparte?

Well there is a bit of research to do backwards on this part of the family.

What was Napoleon Bs mothers name?   Where were N.B. and Lucretia (I wonder did they called her Lucy?) married?   What did they do in Monroe Wisconsin beside have children?  What happened to John Wesley who was born in 1845?  When did they travel to Carsonville Township?  and why? ( I assume it had something to do with three of their children settling here.) What was Robert’s middle name…starts with a B.?

Well I guess that will do for now.  I have all the names of those children mentioned….forward research should be updated at some point.  Just think N.B. and Lucretia had 38 grandchildren.  I have one copy of a booklet that was written in 1983 about this family…I bet there is more info online than what I have here. More resources become available every day for those into Genealogy.

Well…I have this all set for next winter when I might have some time on my hands.

Some cousins for you -

It makes one wonder why they chose the name Napoleon Bonaparte.....I have an ancestor named Christopher Columbus. I believe he was born on Columbus's birthday.

I also wonder why his parents chose Napoleon Bonaparte. It's a great name but... just 4 years after the battle of Waterloo it does seems strange.
I love reading all the lists of your and Far Guy's relatives. We were brought up with lots of family history so it's always fun to read about other families.

I love that you always have projects and/or plans. Some people I know still amaze me that they get bored at home. That's crazy to me. I am at the point wondering if I will get everything I want/need done before being "called home"!!

Wow, that is some interesting history. Genealogy is so fascinating. Good project for those long winter months.

Many of those ancestors are very long lived, I notice. I remember learning that my paternal great grandfather came from a family of 23 children from two wives. My brother has some interest in genealogy, but it's of interest to me only if somebody else does all the work. :-)

Oh, that I knew that much of our families. Great research.

Makes you wonder how and where did they get the name ?

Yes, an online search can drive you crazy. I've looked at some websites but found very little. People will say ,"Oh that's a good website." I check it and find it useless.

September is a big month for birthdays in my family, so my first thought was, "38 grandchildren! I'd hate to have to find funds for all those birthdays presents!" Of course, all those babies to cuddle would be pretty wonderful, too.
Napoleon Bonaparte Lemon is a great name! Imagine having to live up to that all your life.i see only N. B. fit on the tombstone.

I grew up with a girl named Lucretia and have never heard the name since.

Genealogy is fascinating! I have a sister who is very "into it" and we, the rest of the family, are so thankful for all the effort she puts into it. And the names that keep getting used, generation after generation in a family. Although we didn't name any of our kids after ancestors 4 out of 5 grandchildren are named after grandfathers or grandmothers whether first or second names.

Interesting post! I love genealogy. Psst . . . I have Wisconsin Yosts on my family tree-husband of a second cousin 1x removed. But I did not see a Prudence Lemon.

Hmmm...my husband's genealogy once wandered into Winneshiek County, Iowa, too--and come to think of it, they were Snyder/Schneider/Sniders, too. Yes, every day it seems there are more genealogy resources online. What a bonanza for the armchair researcher :)

Sometimes as many questions as answers but always fun sleuthing around! I'm going with Bonaparte as Robert's middle name! :)

you could find the missing mother's name by checking census....not too difficult!

I notice that this post is from 2015. Have you learned anything new. Napoleon and Lucretia were the grandparents of my husband's grandfather, Robert Bruce Snyder, born in 1875, who passed away in 1929. I'd love to upgrade my records and could use your help. Thanks.