The Class of 1968 has some real gems.  Ann is one…she  baked some Artisan Bread.  On Facebook I mentioned that she should open a bakery!  At the Class Reunion she sent a whole loaf of her bread home with Far Guy…oh my you have never tasted such a wonderful bread. 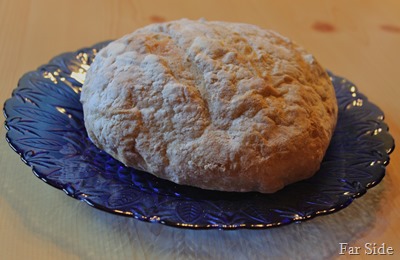 It was almost too pretty to slice…but we did!  It was AWESOME.

Far Guy must really learn how to bake.  It is a King Arthur Recipe.

He brought me home a piece of the Medicare Cake too.  Chocolate…it was  good but not near as good as the bread.  We scanned a Medicare card and then Far Guy took the scan into Paintbrush and changed some things around.  He printed it out and took it to the bakery in the grocery store…I believe they have a special frosting decorating machine that does photos or scans. 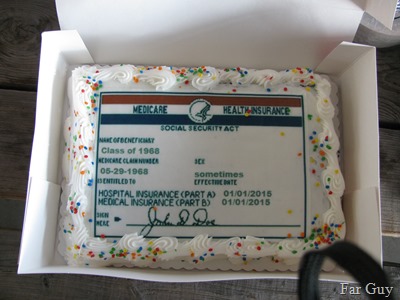 Yesterday Far Guy went to town to help decorate the class float for the parade.  It was hot.  Chance and I stayed home and worked on some projects. 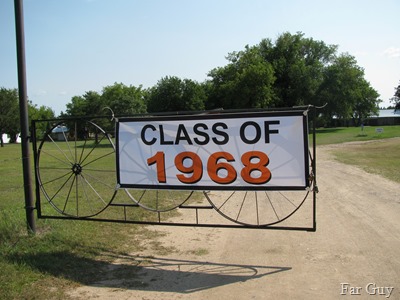 I guess their class motto was “We are not flowers in a greenhouse, but Pine trees in a storm.”

I did not remember that …but if the Class President and the Homecoming Queen say so then it is so.  Their float had some falling over Christmas trees on a flat bed trailer and people in lawn chairs. (Probably so they won’t fall over and break a hip or something.)

My Class didn’t do anything for the parade.

That Medicare card cake is brilliant! Congratulations to Far Guy for his idea come to fruition. :-)

Years ago we never dreamed that cakes could have such decorations.

Great idea for the cake!!

Lots of fun making light of the aging process!

Now that blows my mind as to how cake decorations are made up and then applied to the cake. I'm also amazed at Far Guy's skills for making up his cake decoration.

The cake is wonderful! Very clever idea. I'd take homemade bread over bakery cake any day, though!

The bread looks delicious and the cake is clever! On a different note, do you know about the concert in Park Rapids tonight sponsored by Friends of the Headwaters? It's a fundraiser to promote their work, which is to raise concerns about the proposed oil pipeline. Prudence Johnson, Rio Nido, Kevin Kling....I'd go if I were in the area! In any case, have a great week.

The bread and cake look YUMMY ! glad all went well . Thanks for sharing . Have a good day !

I would love to have seen and heard the reactions to the cake. That is an amazing job. It looks just like the card.
The bread does look good. Bet you I could eat the whole loaf.

Hey, me again. I forgot to say thank you for helping to know what to do with that dogwood tree in the pot..

People sitting in lawn chairs so they wouldn't fall and break a hip or something. Made me grin.

Far Guy and myself will hit the 50th year in a couple of years. Last time I was around the class group they were fussing over a couple of signs for their float. And Larry could you get those made for us? I have a few years to get it done but as a joke I may do them over the winter and mail them to those old people who are fretting.

Hi Nancy, Not much advertising going on for it. That group The Headwaters people are fanatics... they are still using oil and driving their vehicles. No I am not going...I have never heard of those performers before. Could be with all the hoopla with the All School Reunion that there will many tickets available at the door:)

I have to agree, the bread would be my choice as well! Looks wonderful!

There is something to be said about 'small town' What a wonderful idea for the classes to have floats in the local parade. (Just like homecoming in the 60's) Our 50th is next year (did I just say that out loud?) We had a class of 350. Doubt if anyone will be handing out anything to attendees. Too many people!!!

The float was probably a hoot!

I love homemade bread but don't bake anymore. I need to try to make the Artisan bread. Thanks for the link.

Love the cake - and the sense of humor! LOL The bread too looks yummy!