Wistful Wednesday: In the Band

A few days ago I showed you an engagement photo of Far Guy’s Paternal Grandparents.  Grandpa had his trombone. Several people asked about the trombone being in the photo.   Music was a big part of his life and it would be a big part of their married life as they played many a duet together. 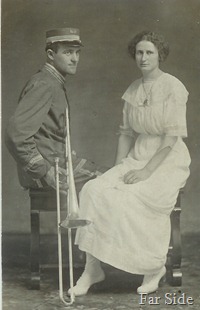 He was very musical.  He played the trombone in the marching band. Back in the early 1900’s every little town had a band.  Sometimes they had a bandstand in the town square or park…people would gather to hear the music. 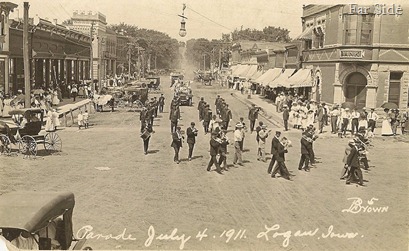 He was also in The Willow Valley Orchestra.  He played the violin. He played for dances..in fact on the back of the band postcard..he wrote I am sorry I cannot come and see you, I promised to play for a dance. 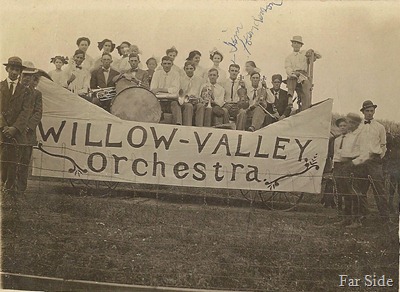 When they came up to Minnesota in 1913, Grandpa played for dances. 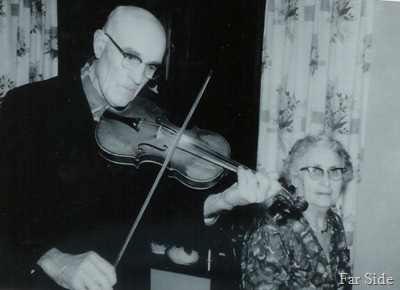 They played the wedding march for Emma and Rubert when they got married in 1913 and then 50 years later in 1963 they played it again at their 50th Wedding Anniversary party. Grandpa played the violin..and Grandma played the piano.  I bet that was really something!

Far Guy is musical, he played the guitar until he injured his finger..now he is working on becoming a banjo player..it is fun to hear him practice.  Our daughter’s are both musical and play piano.  Trica plays the violin, she has her Great Grandfathers violin to play. She used to play for Great Grandma on Saturdays..Great Grandma was so proud of her!

Me well I am tone deaf..it all sounds good to me.  I have no doubt that our children inherited all their musical ability from their father..and he must have got his music talent from his Grandparents…because his parents had no musical interests.  Sometimes unique talents must skip a generation:)

What a great tradition. My mom was the musical one in our family. She played the piano in a band in St. Paul and played sheet music at the Emporium for customers as a young woman. She wanted me to play the piano. I tried for seven years and basically....failed. But I did learn to love music and especially classic piano....

What a wonderful story. My family is not musical at all but the hubbies sister and brother both play the guitar and are very good at it, but the hubby not so musical. I would love to learn the steel guitar.

My parents loved to listen to music, and we had a big stereo system in the living room. But nobody played anything. When I was a kid I learned to play the accordion a little, but I never followed up. It's not exactly the most common instrument anyway. :-)

It's okay you don't play because every musician needs an audience! I love that they played a duet on their wedding day. One of the books we have in our church library said that when you plan one of the most important days in your life, make sure you include something that you both love - - like their music.

It is funny how people inherit talents from their ancestors. My husbands family was very musical and all the children play an instrument as well as sing.

Wonderful photos ! Our family are all also musically inclined , I remember the days on the farm we would all get together on a Sat evening and jam and those who didn't play danced it was amazing ! Thanks for sharing with us . Have a good day !

What an interesting story!! The only thing I play is the radio!!!

In the days before TV, the community band and dances drew the community together. Your photos and family history capture those fun times.

My area has a Community Band (they don't march) that plays one evening a week during a summer month. It is heavenly to sit and listen to them. The sound is so much clearer outside.

I, too, came from a musical family (as did my husband, but he can't play/sing at all!) My siblings and I played the piano, and my brother played guitar and banjo, too. My own kids all learned to play the piano, and my daughter played the flute, as well. My husband's brother still plays all kinds of horns, and he travels the country with bands.
Peace,
Muff

Wonderful story. I love to listen to my cd's. That's as musical as this family gets. Dang I wish I could play an instrument but never learned.

Ah, how this brings back memories. Not to 1913, you understand...but my father played both trombone and violin, too...marched in the Memorial Day and Fourth of July parades, playing his trombone...played in the symphony on his violin.

How fun it must have been going to a country dance and having Far Guy's grandfather play the fiddle for the occasion. The young people around here try to organize those types of dances around here now, but it is quite hard to find someone to play the live music for them. A sound system and recording makes a distant second to a dance with live music.

The old timers had to make their own entertainment. They taught each other and I'm always amazed at the talent they had with no formal lessons.

I have a great grandfather who played for the town band. Actually I think he played for a bigger band too. I really believe in the skipped generation thing. I am much more like my grandparents than my parents.

Our kids both went through the schools music program and they played with the school jazz band in competition each year. We attended a lot of performances and in most years went to see them play at State competition. Both guys have their instruments but I wished they could continue with their music. Interesting history of Far Guy's grandfather. Most people back then had to teach themselves or had very few lessons.

I love that first picture of the couple:) I always think musical families are so lucky. Larry's mother was very musical, Larry not at all. Meredith had potential, but not the drive. The piano hasn't been touched since was allowed to quit piano lessons once she turned 16.

When I was little we used to go to the band concerts in the park and they had electric lights strung up and there was popcorn and usually a cake walk later. I loved it...I wish they'd bring it all back!
I think the only talent I inherited was the hard work talent but I've even lost that now! LOL!