Some people were whispering loudly..”Who is that tall one?”  Someone answered “That is Noah.”

He is a head or two taller than most of his teammates.  He is six something..I say something because he is always growing.  His Mother is continually buying him new pants…I think she breathes a sigh of relief when it is summer and he wears shorts.

We won’t even talk about shoes. 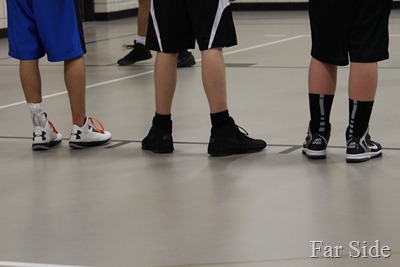 He likes basketball.   I think with his reach ..perhaps boxing would be a good sport for him also. 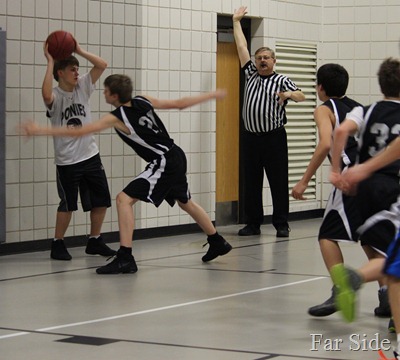 He plays a position called a post.  I know nothing of basketball..except I thought there were Guards and a Center..now there is a post??  They must have changed the names of the player positions in the past forty years.

I’ll say one thing for Basketball..it is much warmer than Hockey. 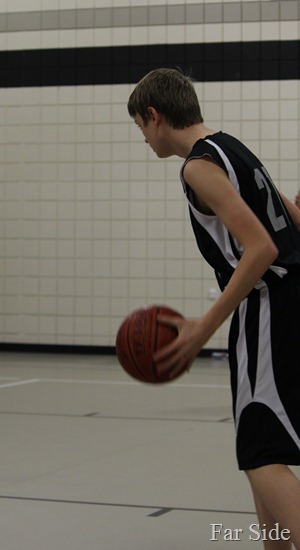 He did get a shot at the basket. 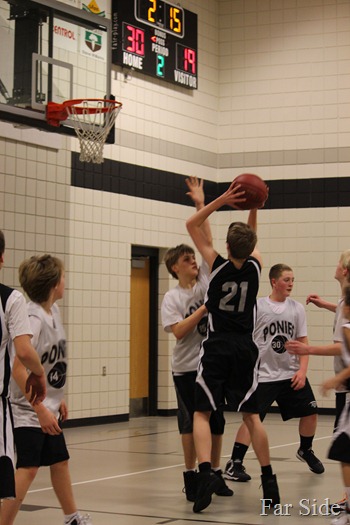 His team won their game!  He was tired after the game…and ate a really good supper..I heard he is eating two meals in the evening..supper 1 and supper 2.

It was fun to watch him play basketball.  Basketball season is almost over.  I am glad that the weather finally cooperated so we could travel to see a game:)

Glad you got to watch Noah play his basketball game. I've never heard of a "post" before, either. Congratulations to Noah for his win, and I guess it's true that growing boys eat you out of house and home! :-)

Nice photos ! Congrats Noah on your winning the game .

I love watching the grandkids play ball. My 10 year old grandson is just the opposite. He is sort and quick, rarely gets to shoot the ball (although did make an fantastic accidental hook shot), but can slip around and steal the ball from the taller boys. Alas our ball season is over. Congrats to Noah's team.

Yey!!!!! Glad Noah won and you got to watch, Francine.

They grow up so fast! Happy you could attend the game. I like the idea of TWO suppers!

Go team! At least he is getting enough to feed his growing frame. Looking good on that court.

So glad you got to go watch and that is indeed one tall bean pole of a boy! I can't imagine trying to keep him fed!

Isn't it amazing how tall some of the kids grow these days! glad you were able to get to see him play and his team won.

I'm glad the weather and the roads cooperated so you could see Noah play. I bet Noah was proud to have you in the stands.

I love watching my grandson play BB, and he, too, is one of the "tall ones". I really look forward to the season and going to his games. He's going to be a senior next year, so I only have one more year to enjoy it. (sad face) You got some really nice images!

It's always the same with these kids. Somebody is always a head or two taller. Usually it doesn't make much difference as the big kid tends to be awkward and there's always some little guy who can weave in and out and the other kids are left at the post!

Basketball is one of my favorite games (to watch). It takes quickness and skill and teamwork, and it doesn't glorify violence. Good for Noah, and good that you got to watch him play. Good action shots, too.

Bet you're really proud of Noah, aren't you glad you don't have to feed him?