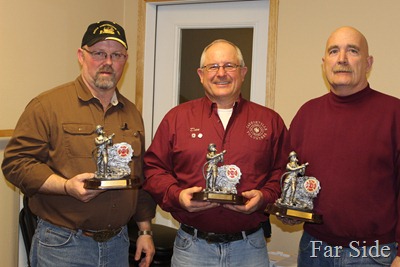 Almost six decades between them. You're right: they did good, real good, and everybody came out of it alive, with probably a lot of stories as well. :-)

We have volunteer fire departments here as well and they are all brave and well appreciated for all they do ! Congrats guys on your retirement now get out there and have some fun lol ! Have a good day !

Congrats on putting in so many years and on retirement... again! There is something about the allure of danger that seems to attract some men. My step-FIL volunteered up until his late 70's. In the last years his duty was to put a blue light on his car and direct traffic. Something that was important and made him feel good.

Hats off to those three for a job well done. And to think of all the horrible things that might have happened if they hadn't been available to help out. They are the true home town heros!!

A long and peace-filled retirement to all three of these wonderful men. Bless them all!

Congrats to the three guys on a job well done. Connie, you've earned your peace of mind and 'ignorance':)
Our local firehall here is also volunteer. Thank goodness for them.

Such a necessary job in rural communities, congrats on a job well done guys. Your right if you didn't have volunteers help would be long way off.

The job they did is amazing....imagine how things would turn out if they were not there to help.

God bless those volunteer fireman and we are so glad they made it to retirement safe and sound.

A great photo and fitting tribute. My thanks to these men and their spouse/family for their service.

A wonderful job. Thank you all for your service of a different kind. Congratulations!

Well, you can hardly beat the adrenaline rush of heading into a burning building, but I'd rather be a 58-year volunteer at a history museum any day. But thank God there are some guys out there who step up to do the job. Where would we be without our emergency response people?

Living in an urban setting with a professional fire brigade, one forgets the contribution made by volunteers to this vital emergency service. Congratulation to all of those three retirees, wherever we are we thank you and your fellow volunteers for their service.

Hello would you mind stating which blog platform you're using? I'm planning
to start my own blog in the near future but I'm having a tough time choosing between BlogEngine/Wordpress/B2evolution and Drupal. The reason I ask is because your design and style seems different then most blogs and I'm looking for something unique.
P.S My apologies for being off-topic but I had to ask!

God Bless them all! Having lived in the country or small towns I can appreciate the Volunteer Fire Department and always gave generously and attended and cooked for all events they had to raise money. And you're right about the families too. My son was one until they moved to the city. Unsung heroes and heroines for sure! Congratulations to all involved!