Hiya it is me Chance!

Far Side baked for me.  She was sick and tired and tired and sick of dog treats and not knowing what was in them.  Some of the dog treats in a local big box store killed a dog across the lake..those treats came from China.

My homemade treats have pumpkin, molasses, cinnamon, flour..and some baking powder, soda, water and a bit of vegetable oil.  Easy peasy..they were supposed to be like cookie dough and you could roll them out in cutesy little shapes..Far Side bought a special cookie cutter in the shape of an apple. Well that didn’t happen.

She tried to look up her recipe to double check the ingredients..couldn’t find it so she went with what she had.

Far Side is not much of a baker..or a cook either for that matter..but she cooks better than she bakes.  She cooks vegetables real good..they are my favorite..and she shares with me every night.

The baking project went downhill after she spilled a whole bunch of flour on the counter and the floor. I think she might have said “Bad word, bad word.”  Far Guy came to the rescue..by that time she had the mixer mixing at ninety miles an hour..she lifted the mixer up at tad too much.. and ..well Far Guy got dough splattered all over him…most landed on his head as he was cleaning up the flour from the floor.  He said “I felt something damp hit my head, was that from you?”  Well she couldn’t deny it.

The dough looked sad..too bad there is no photo..she was DISGUSTED..she spent another half an hour looking for the non existent recipe I think she dreamt up.

It looked like mushy cookie dough..so she test baked a batch..she dropped the mushy stuff by spoonful on parchment paper…and baked them.

She said “AW heck” and then baked the whole batch.

After they cooled..we taste tested them..I really like them!  Far Side tried one too..Far Guy made a funny face, he couldn’t believe that she was going to taste it..she said “It tastes like flour.”

They don’t look real purddy..in fact they kinda look like little hills of swirly dog poop.  I have lots of experience in the dog poop category.  I guess you could say I am an expert. 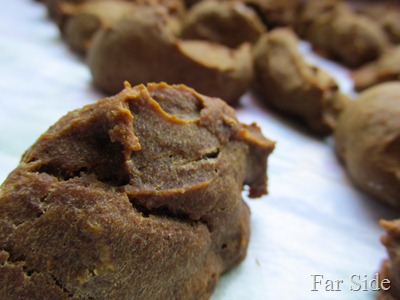 Morning Chance, you ate a lucky boy, Our treats sound yummy but not in the looks department, :) Francine.

Sounds like some of my cooking experiences. Glad the results pleased Chance.

I laughed out loud thinking of Far Side lifting up the beaters and giving Far Guy a spraying of your very own doggie treats! They don't look too bad to me, Chance! I hope you enjoy them. :-)

Oh, I had to laugh. I'm just like Far Side in the kitchen too!

Your treats may not look pretty but as long as they taste good and are good for you. We have a local "pet bakery" and whenever I go in there it always smells so yummy. You are one lucky dog to have Far Side care so much about what you eat. Sure wish I could have seen Far Guy get splattered with "cookie" dough when Far Side lifted the beaters up. Enjoy your treats.

Chance, you are a fantastic Blogger. You brought the whole baking story to life - even without pictures!
Tucker and Gypsy wish Dreaming would bake them treats!

Oh Chance, you are a lucky dog. Far Side went through a lot of work to make you treats. And if you like them, that's all that matters.

Oh Chance, this made me laugh. It sounds like my mom's cooking experiences. She's never made me dog treats though. Can you believe it??
~Duke (and his mom Laura)

From one experienced random whatever smells bad eater to another.
Hey Chance,
My boss give me pupperoni cause he like pizza. I don't yours looks a lot tastier. And if its dead or should be I'll try it. See ya.
Your friend from Bluff Country,
Baron

It is scary. Lil's mom died from bad dog food from Wal Mart. Maggie has had trouble with red dye making her itch. Maybe we should just go back to bones from the butcher shop.

This might save you some work. I only buy Charlee Bear treats...made in USA with only USA ingredients. I usually find them on Amazon.com and watch for their free shipping on them. I believe they are available at some stores but I've only bought them online. Here's their website....
http://charleebear.com/
these were recommended to me by a dog trainer years and years ago and also my mail carrier kept them in her pocket as they are non-greasy. Every time I hear about a dog who has died because of bad dog food or treats, it infuriates me. I don't understand why regulations aren't stiffer.....our pets are our babies too.

Okay, that was funny:) Did you offer to lick Far Guy's head clean? Was thinking though that those cookies would be better with some meat in them.
Tell Far Side that she just has to cut up some liver or heart or... and cook it slow. No chance (ha ha) of mixer disasters, and better for you:)

Oh how funny! When I try to bake, I usually make a mess! So happy you like these and that they are safe for you. Harriet is a dog poop expert, too!

Your treats look a lot tastier than the neighbor lady bakes. Yes, our little poodle got very sick and it was from the Cesar dog food. We heard later it was recalled. He didn't eat much but because he was so old we thought some teaspoons of soft food would help out his old gums. Anyway, we now cook chicken for him to supplement the dry food. I hope you get to eat a lot of your treats often. You do know how to beg for them don't you?

Oh Mr. Chance, you and that Far Side crack me up. You are one lucky dog, Pepper Nipper is lucky to get the store treats.

I read the ingredients and thought to myself, "Mmmmmm, those sound goooood....I'd taste 'em too!!!

Have a fun day Chance, runnin' and eatin' great treats. Looks can be deceivin' ya know??? :o)

Thanks for the giggle today, Chance. You and Far Side made my day.

Chance , you story really made me laugh. There should have been pictures. I'm sure if Norman Rockwell was alive he could paint a picture that would show all the details.

Oh my thanks for the giggle lol ! I can imagine Chance laughing under his breath ! My Mum always tells me off cause I eat anything and everything my fave is bunny poop so if I get sick who knows what it's from lol ! I love veggies to . I will have to get my mum to make those for me some day ! Have a good day Chance from Miggs at Country Cove Crew

Chance, You are very lucky. Ann never bakes for me. When she bakes for Dave and drops a pan on the floor I get treats then.I always look for doggie bags when their gone for a long time. I know when Ann & Dave are eating supper and ask to come in. Just Maybe there will be left overs. I really like eating real beef bones. I like raw carrots out of the garden. Keep us laughing. Baily

Haha!!
If you like them, Chance; I think that is what matters. :o)

First off I had to laugh....sorry! I could just see the whole thing. Now, when you find the recipe I really would like to have it...I try to make cool things for the dogs all along...and those looked really good!

Well, Chance, that's all that really counts, anyhow: that you like them :)

Chance,
This recipe has all the ingredients FarSide mentioned...maybe it would work.

An evening of entertainment AND food - - and you never had to leave home!!! Sounds like a good deal in your winter weather!

Chance, too bad you didn't have a camera, you could have put it on Funniest home videos! I'm glad the treats tasted good, that was a lot of effort put into making them!

Tell her she can post the recipe as "Do Do Bites"!!

Thank goodness you finally got some after all that! Don't tell them but we laughed a lot over that post! OMG! I was laughing so hard Mom came to see what was going on! My Mom is not a great cook or baker...she's anal about following a recipe and is not "a creative cook" but she makes us treats from scratch for the same reason but now she won't even give us those since I got so allergic to the food, we think. It was Pedigree and she never bought the Chinese stuff but I'm feeling great again and my eyes are better and my hair is growing in and I don't smell anymore. Mom's happy as a clam but is scared to give us anything but the Science Diet food now. Her treats were made from quinoa flour and oat flour and berries and peanut butter....we loved them but it's going to take time she told us. She has to consult with the vet and make sure it was the wheat and byproducts and get his okay that I'm all better. So, have one for us because it looks like it's going to be awhile before we get any. Tell Far Side we'll have our Mom email her the recipes she uses...they're really good! Aren't we lucky to have owners who love us so? Enjoy your treats!