The other night whilst watching Hockey..I searched for a photo I did not find..but I found lots of other things. 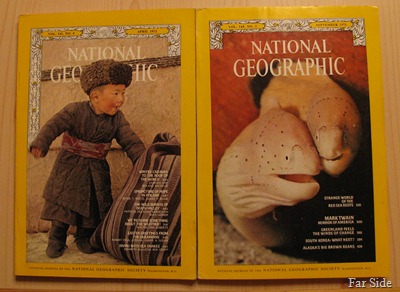 I had a whole bunch of 1930’s National Geographics and then these two.  Then I remembered the day that Far Guy and I were at a garage sale that had hundreds of these.  We searched through stack after stack until we found  one for each of the girls from the month and the year they were born..just for fun.  It could be worse..they could have been photos of half dressed natives of some foreign country. Jen is not going to appreciate those Eels or whatever kind of weird looking albino fish those are.

I tried to save some time yesterday..by typing fast and not saving..I was almost done..and then the blankety blank old dying Historical Museum computer hiccupped..and lost everything I had written.  I was working on the February newsletter.  I came downstairs..disgusted.  Went back upstairs after I was done feeling sorry for my stupid self..and every five minutes Far Guy would holler “Save your work!”  I finally got it done, came down to print it out and discovered that I could not access a pub file from either of our computers.  I called Jen to make sure I wasn’t missing something.  I wasn’t other than a  Microsoft Publisher Program on one of our computers.  That program costs about 120 dollars…the Museum may have to spring for that software after their computer crashes. I believe a former Director loaded her personal copy onto the Museum Computer.  So anyways we had to haul my printer upstairs and hook it up so I could print the Newsletter..and then I ran out of ink…twice.  So now I need to go get ink before I can finish…I figured as much..but I held out hope that I had enough ink on hand to finish the project.  It is not quite February yet..I still have time.

We tried one of those thingys from Wally World Electronic Department.  It is a thinga mabobber  that you plug into your USB port and it makes your old computer wireless..it worked as advertised on the Historical Museum’s piece of junk computer.  Eventually I will use it on my old computer upstairs that has lots of games on it for the Grandkids.  For now it limps the Museums Desk Top Computer along for the winter..which saves me the hassle of having yet another computer downstairs..but I am not sure it saves me any time at least not yesterday:(