Time to turn over the calendar.  Begin again..make new “to do” lists..some of which are repeats from last year.   Clean out the cupboards and drawers..organize..those things end up on my list every year. BORING. I had a “to do” list and I was working on it before I was interrupted by Christmas.

I did not make any resolutions this year.

BUT If I were to make some these would be real high on my list:

I should be more patient and kind to stupid irritating people.

I should answer the phone cheerfully as if I really give a crap about the person on the other end of the line. ( My other baby brother says I should practice this one everyday.  Sometimes he even calls twice in a row just to check and see how damn cheerful I sound.)

I should be more willing to drop all of my projects and tend to all so called emergencies that wouldn’t be emergencies if some people had their poop in a pile.

I should be calm and understanding when Far Guy forgets his pills all day long and is in terrible pain…ding..ding..ding..if he feels rotten it might be he FORGOT his pills..not one dose..but several.

I should be tolerant of all kinds of different behaviors..like when the checkout lady at the grocery store stops to blow her nose really loudly and her tiny little Kleenex can’t catch it all so she wipes her hands on her pants..I shouldn’t cringe ..next time before choosing a checkout line I am going to observe the checkout gals..if they look like they are getting a cold..I am not going in their line.  If someone notices me observing from afar..I will just say “I am looking for the least germy one.”

I should not think badly of people because they bathe in perfume or aftershave instead of water.  They have obviously lost their sense of smell, or destroyed it with their spritzes and splashes of toilet water..or perfume de skunk.

I should be cheerful and understanding especially when I  have declared a time out on the couch for a whole hour and I am interrupted half a dozen times during that hour. After all talking with me might just be the highlight of a miserable day.

Yesiree..that would be a partial list if I were a resolution making kind of gal. 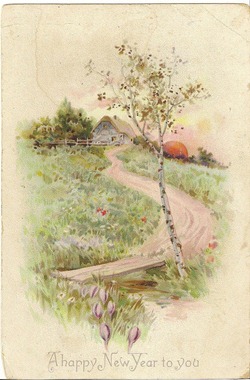 Labels: I am in a fairly bad mood, no resolutions, Opinion