I absolutely loved playing hopscotch as a child..all you needed was a stick to draw the hopscotch squares and a rock to use as a marker.  I played many a game of hopscotch with Kathy who was a neighbor gal whose Mom used to take care of my baby brother and I while Mom was at work at the Boat Factory.

I suppose it was a girls game, you could play it whilst wearing a dress..as long as you were careful bending over to pick up your rock on the way back.

Times have changed..now we have sidewalk chalk.  In town there is hardly any dirt left to scratch around in. 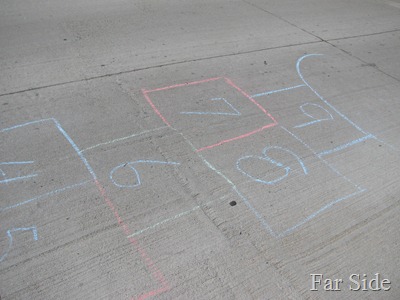 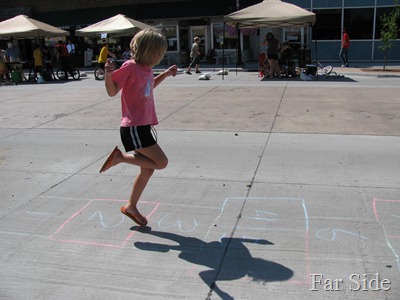 I am thinking that I would like to have a permanent hopscotch course on one of the sidewalks that lead up to the Historical Museum.   Colorful  squares with numbers and perhaps some old timey objects..a top, a doll, a train…you get the idea.  Something that would catch a youngsters eye and bring back a memory for the oldsters.

I suppose I have to get permission for the project from the Country Commissioners, then approval from the Historical Society Board, then get a donation for the paint..and then find an artist to paint it.  My one little project is no longer an easy one.. In the meantime I have lots of sidewalk chalk that I can use up.

I have lots of little projects swirling around in my head.  The ground work is being laid this winter…some will work out and come to fruition and others will die a sloooow death:)