Chance : Out for a Drive

Hello!  It’s me..it is the most handsome blogging Border Collie in all of the world Northern Minnesota.

Far Side and I went for a drive..we saw smoke and a fire in the trees..and about 50 turkeys in a field.  The Turkeys were too far away for a photo..but we watched them anyways.

When Far Side drives..I ride shot gun..you know co pilot.  That means I am in charge of my own window. 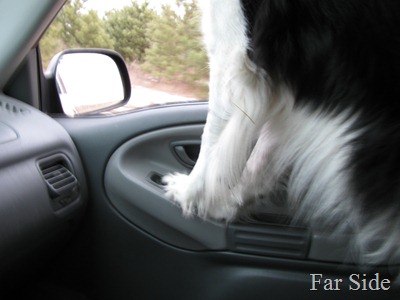 I am a window operator.  I can push the button and roll it down..scares the crap out of Far Guy.    ( They had an in depth discussion one day..about whether or not I could roll it up so fast that I could catch my head in the window…so it was decided if I hit the window button that the driver would immediately hit the window lock button and save me from squishing my own head.) Someone (might have been Far Side said) “Well he is a Border Collie ..he otta know better.”

Yesterday my window antics just made Far Side laugh..so she was laughing, driving, trying to hit the window lock and taking a photo all at once.

Good thing were were just Sunday driving down a gravel road where there was no traffic.  Well except for the blankety blank Fed Ex driver that passed us while we were going up a hill.  Far Side got the address he was delivering to and noted the time of day..she said something about reporting his ass…and for goodness sakes what’s the rush you could have gotten us all kilt…dumb ass. 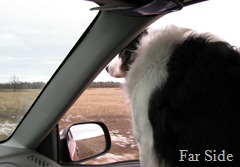 There is nothing better than hanging your head out the window letting your ears flap in the breeze. 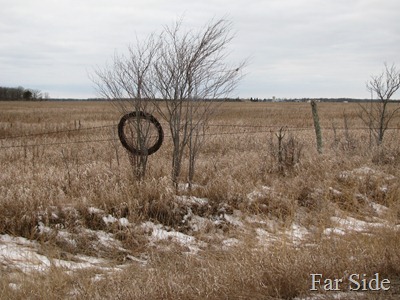 We have some snow in the woods..but out on the prairie is is brown.  Far Side says this is a section of native grass prairie..that has not been sacrificed to the potato gods…yet.

We had a very nice drive.  As soon as we got home it started to snow:)