This photo was taken in December of 1950. 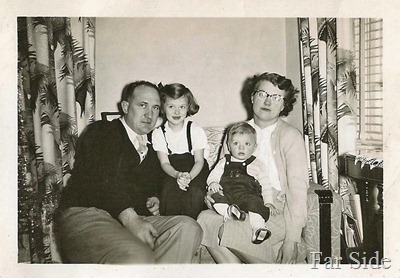 Uncle Jim or Auntie Esther took this photo, it was taken at their house in Grand Forks North Dakota sometime in December of 1950.  Far Guy was not yet a year old and his sister was five.

Far Guy has the old tape on his shoes, the tape made your shoes less slippery on wood floors.  He was about 10 months old and most likely had started running.

He was a handful and I know I have told you before that his Mother had a harness that she made him wear when he was outside by himself.  She clipped the harness to a rope attached to the clothes line.  He would hide in the Lilac bushes to unhook himself, go to the neighbors and play..and then come back and hook himself up again.  When his Mother was still alive, she was aghast at the escapades he told her about.

Last week in the grocery store Far Guy saw a little girl that was attached to her mother by one of those leashes that goes from one arm to another. The little girl was not very happy.  Her sisters were not leashed.  I asked him if he talked to the Mom..he said no..but he would have liked to share with her that he wore a harness for many years.

This is one of the photos that Cousin Bonnie gave us last summer.  It was one that we didn’t have.  Luckily I knew some of the W’s..who, where, and when.  I will have to guess at the why.  Most likely they just went to visit for the weekend:)