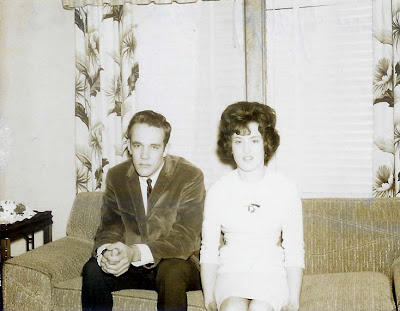 This must have been taken by Far Guys Dad..it is Far Guys Sister and her beau who she married five years later. She must have been in her first year of College. She was off getting straight A's and making life miserable academically for her goof off baby brother. This young couple must have hit it off pretty good..as they have been married for forty-one years. They do argue some, especially when one of them is driving..I thought once that they should get a car with dual controls. Oh darn I suppose she will call again..I told her to take whatever photographs she wanted..she must have left this one behind because she wanted me to blog about it. She lives in Indiana so it is unlikely that she will run right over and demand her photo back. I wonder where they were going for their New Years Eve celebration?  Probably out to dinner. They look really young, and my brother in law had hair! :)

What are your plans for New Years Eve?
Posted by Far Side of Fifty at 9:35 AM

What a cute photo, everyone looked so glamorous back then.

Plans, lets see, first Gar will fall asleep in the chair watching TV, it will be around 8:30, then I will, and then we will stumble off to bed around 10:00.

Oh and then the party will resume at 2 am when Bootsie wakes us up for the 10th night in a row.

He is sleeping all day, just to get up enough energy to wake us up every hour after 2 am.

Kind of wish that this house guest would go home once in a while.

Oh remember the hairdo! Wonder where they went out to eat? Remember when we always wore skirts or dresses out? Wow - Don't even own a good dress now!

I love to find photos like this of my brother and sister to torture them with!!! Congrats on their long married life together!

Oh, back in the day when a fella came to the door with a tie on to pick up his sweet thang'! Poor fella looks as if he just had the third degree from PoP.

Hubby and I will snuggle with a movie in front of the fireplace and later retire where we will welcome the New Year in through the backs of our eyelids! Heeeeeehheehe!

Have a happy New Year!

With all of your love of pictures, stop by my blog today (12/30). I have something that might interest you and any of your readers that love taking pictures or looking at pictures!
http://myretirementchronicles.blogspot.com

We use to go out to eat on New Years and that can be so frustrating. If you pick the wrong place you can wait for an hour or so. We usually spend our time in front of the tv watching whatever, or view a dvd movie that is our favorite. I really like the photo. I can remember those couches and the curtains. Neither one of them had black framed glasses like I had.

I will do the same as all the commenters are doing .Boy what a bunch of old party poops we are.LOL
Happy 2010
Patsy

We are staying home. We usually do anyway, but this year we need to babysit Mr. Higgins on his first New Years Eve. He is very noise sensitive and some folks around here like to shoot their guns at midnight!

Looking back is always fun.

The early Sixties, thanks to Jackie, were a glam time.

We're hosting a toddler party -- all 7 grandkids under the age of 8 are coming!

happiest of new years to you.. onward and upward
gp

The only thing missing in the photo is a great big old bow in your SIL's hair. I remember that hairstyle. Seems like we always had some type of thingamajig stuck in it though. You and Far Guy are right behind them in the years married department. Very few couples last that long anymore.
No big plans here for New Years Eve. Hubby will be snoring by 10PM. It will me and the grands ringing in the new year will Dick Clark and a bottle of sparkling cider.

Thanks for the comments everyone..we are planning a quiet evening at home also. I hope that they don't set off oodles of Fireworks down on the lake.. Chance hates that:)

Another classic photo! Thanks so much for sharing these memories of your family that resonate so much with the rest of us.

laughing about arguing in the car. We argued at the drive-up for fast food. WE finally had to quit that. Not the arguing. The drive up window.
We always go inside now.