The Best Gift Giver Ever

My youngest daughter is a shopper..she obviously got this ability from someone else..perhaps from her Aunt Jan..she is a shopper. My Mother is a shopper too.. I do like to shop just not where everyone else does..I can spend hours in an antique shop, and I love the thrift stores and garage sales.

Jen always strives from one year to the next to out do herself..she is an overachiever. She also likes to see me bawl..then she knows that she did great. I think she starts plotting and planning immediately after Christmas how she is going to be the best gift giver picker outer the next Christmas. She is also sneaky. A few months ago..she sat at my computer and said "Mom, I need some photos to make cards, can I have some of yours? " Sure, I said..it was for a fundraiser at the school... little did I know that she was going to take one of my favorite photographs..and have something made for me. 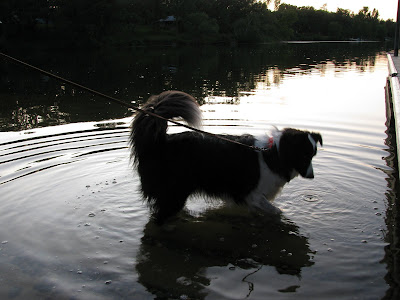 I took a series of photographs one beautiful summer evening. Far Guy and I took Chance for a walk down at the lake. Chance was on lead. 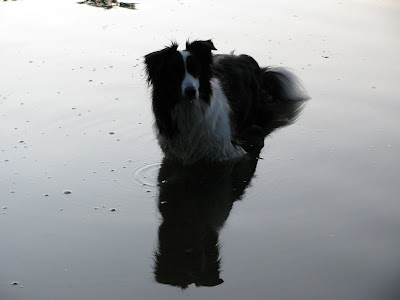 No one was around so we took him off lead..he is usually well behaved off lead..he played in the water awhile and then he began to pose for me. The light was fading fast..it was one of those moments that I was glad that I wear crocs in the summer as the dog and I were both in the water. Some of the photos turned out just smashing! He loves to pose..and he is getting pretty good at it too! Some days he is really on! 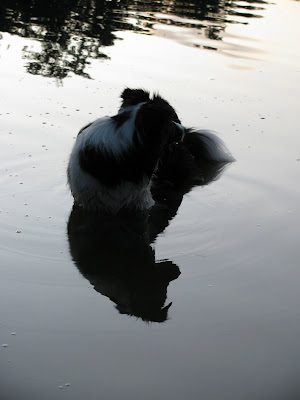 I captured his reflection perfectly. I was so pleased. 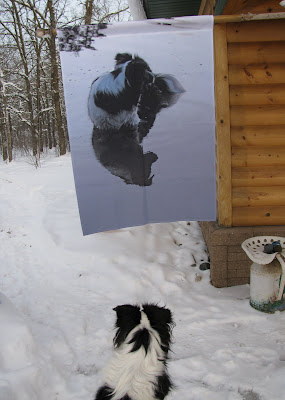 Chance must be famous now... his photo became a flag! Jen wins the best gift giver award once again...I tried not to cry when I opened it..but I immediately recognized the colors and those ears... forever on a flag. You woulda cried too if it happened to you! :)
Posted by Far Side of Fifty at 9:23 AM

What a thoughtful gift, and nice photo! She has you pegged. Hmmm.....now I'm wondering which photo of Skipper I'd like on a flag....the one with the fishing hook stuck in his nose or the one where he's sleeping with a kitten.??

Extraordinary gift givers are clever and creative and sneaky. It sounds like Jen is all three! The flag is wonderful. Enjoy

That is just wonderful and so is the daughter.
Patsy

You're right, I would have cried too!
What a thoughtful daughter to come up with such a wonderfully special gift.
Sunny :)

What a great idea Jen. I would have cried too Connie. That is just so special.

That is such a unique and thoughtful gift from your daughter - I would cry too! It is the perfect touch to your lovely home.

That is such a thoughtful gift! I would definitely cry. In fact, I got my very first DSLR camera and I did cry!

I gave my parents a photo book (hard bound, thick paper) with lots of photos I'd taken and words and apparently they cried...

Pretty darn cool!!!! Chance is one of my favorite dogs and I have never really every met him. He is a great blog dog...

She does have you pegged, and of course, he is a super dog. Great shots of him.

What a perfect gift for you.

A plotter, sneaky, creative and ingenious little rat she is! I think I love her, she's my kinda' of gal. How could you not let the good~~time tears roll. You can treasure this forever!

Sister, I was born without the shoppin' gene too. I would dot~com my groceries if I could.

God bless you Connie and have a wonderful New Year!

Absolutely fantastic. What a wonderful daughter. She may not have inherited shopping skills from you, but she inherited your creative flair. I can't think of a better picture to put on a flag - Chance is perfect. And I remember your song lyrics too - Lesley Gore - It's my party.

I think, Connie, that Chance is worthy of being immortalized on that flag. And what a wonderful picture you took of him. Your daughter deserves the Best Gift Giver Ever award, for sure!

I agree with Nezzy, and I love your photographs and the gift!! It really is a special gift!

Oh Connie~ How perfect! Knowing your total love for "CHANCE"......well FAR GUY too!....
I think Jen is SUPER COOL!

What a neat present! She really outdid herself - how can she keep doing that???

What a cool idea...at first I thought she might have made a calendar of his photos..but this is wayyy cooler!

I'm a little misty-eyed even though it isn't me. What a superb job you did of raising that girl!

Outstanding! What a creative and loving idea.

Wow - that is great! And a wonderful idea! Those gifts are sooo fun!

You did a great job with the reflection! I love antique shops, the husband and I will go antiqueing every so often!

How amazing, how thoughtful, how creative, how...why do my eyes have tears? Well done, daughter.

Guess what? The Duchess is crying!
It's so beautiful and something to treasure forever. *sniff*sniff*

I think you must have raised her right!

I hope my little son grows into a thoughtful young man who plans prezzies for his mommy :)

What a wonderful gift! Love it!

Isn't it wonderful to be on the lists of extra-super-good present givers? This is a treasure!

Thoughtful and wonderful gift! Such a pretty dog too...