A long time ago..1990 to be exact.. I had a dream. No not one of those Christmas nightmares either. We were living at the resort..one area of the house had really tall ceilings..I wanted a really tall tree to go in there..why should I let the short seven foot ceilings in the living room restrict me?

I found the perfect tree..it was near the edge of the swamp..I loved it..it had lots of cones in the top..and oh my was it tall. I had to wait for Far Guy and his chain saw... I was so excited..everything was going to be just perfect..I could see myself dangling on a ladder stretching for the highest branches..just like in the movies..maybe I would even put a dress and heels on and everything..make up too ( that is a stretch) ..but I had a lot of imagination back then. The winters are long in Minnesota. Plus that when I get it all decorated to the hilt..someone can take a photo of everyone in front of the tree..what a dreamer I was. 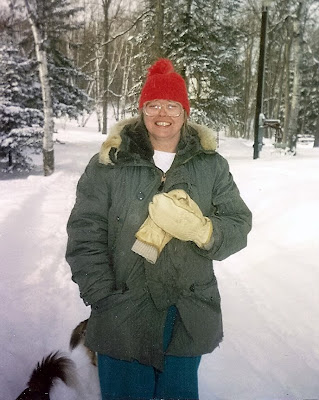 Finally the weekend came, Far Guy commuted back then, he left in the dark and came home in the dark..his commute was 85 miles one way..what a trooper he was..working in the city to allow his girls the best of country life! Of course I could run the chain saw..if a tree was down..if it was tall and huge and still in the air..I would chicken out. It was perfect..it came down in one fell swoop..the dogs and I always waited in a spot of safety and they would sit by me and wait until the tree was on the ground then they would run and bark...silly dogs..there were four of them..all Shelties. I was so happy..my tall tree was going to be a reality!!

Then Far Guy did the unthinkable..he trimmed my beautifully tall tree to about seven feet tall..I began to bawl.. it WAS perfect..now it had been detrunked. Apparently he had not been listening or I had not stated loud enough that I wanted a huge honkin tall tree in the hall..one that reached the ceiling..and the ceiling was about 12 feet tall. He offered to tape it back together with duct tape..how sick is that? He offered to cut down another tree..now that would have been wasteful..so I settled for another Ho Hum Yup it is a real tree and it will smell good and the needles will drop all over the floor and I will have to remove pitch from the floor. The cats will think that it is tall enough to climb anyway..they often perched in our Christmas Trees like real live ornaments. 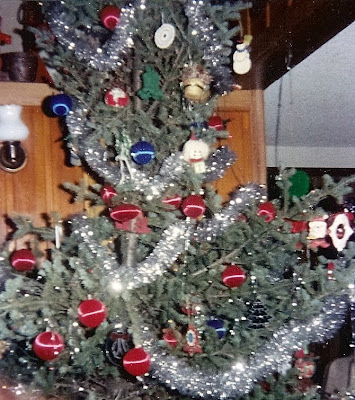 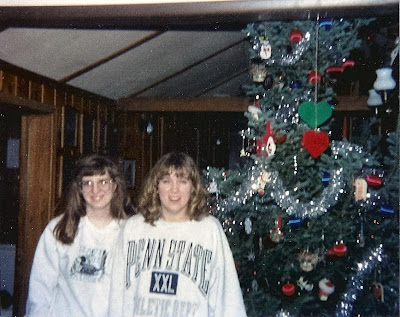 The girls posed for a photo that year..they were eighteen and fifteen..I was a real pain in the butt Mom..can't you tell by the expressions on their faces? I was a pretty rotten photographer back then too. 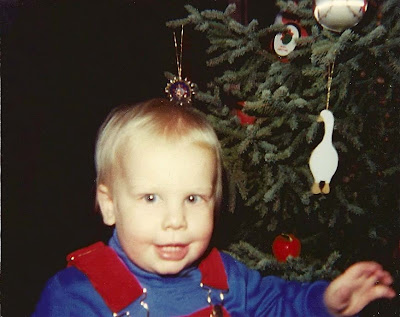 We needed a little kid to perk things up..one with the wonder of Christmas in his eyes.. my Nephew Jacob was perfect..and my Mothers tree was perfect that year too.

Now that the upstairs is completed..I told Far Guy about my dream again..I also mentioned it to one of my daughters..they both think it is silly to want a tree that reaches all the way to the ceiling...my son in law thought it was a pretty cool idea..he offered to find one for me and drag it into the house..tall and whole. What a guy!  Our very wise daughter said "Mother, you know a real tree is just going to lose its needles and get caught in the carpet and when you walk barefoot up there you will get needles in your feet...and the pitch..don't forget about the pitch Mom." So..even though my upstairs is completely done..including drapes....it does not have a tall tree this year..we are going to look for a fake obnoxiously tall tree after the Holidays..maybe even one on sale. One that I will need a ladder to decorate.. a tree large enough to hold my entire collection of Shiny Brite ornaments ..wouldn't that be a treat!

Talking about treats..the grands will be descending on us about ten o'clock this evening..and there is a storm coming..so we could be snowed in for days :)
Posted by Far Side of Fifty at 12:16 PM

Ugh...I can't believe he cut the tree trunk off to 7'!!! Well, maybe this is the year you'll find a real deal on a tall, fake tree. My MN nephew is in GA today where it is 55 degrees! He's in Heaven! I hope everyone makes it to your house safely and you all have a wonderful time.

Ooh, there was a time early in my married life when that Tree Incident would have caused me to say "Now you've ruined Christmas." And mean it. Fortunately, I grew out of that pretty fast, and we started using that line as a family joke. As when our daughter accidentally poured too much pepper into the green beans...The Pepper Incident.

I hope you get your very tall tree... Maybe you should do a real one, just once. Just to realize your dream. The needles and the pitch will be a good reason not to do it again, but meanwhile, you'll have done it once. C'mon, it's your dream!

Connie, a friend of mine has a fake really really tall tree and they need to use a block & tackle to get it upright. They wanted one to take up the whole area in their front foyer... she got it after Christmas one year and wondered why it was so cheap ("only used once!") until they tried to get it upright! Good luck, Connie! Let us know if you get one...

Connie,
I'd be afraid a 12' tree would fall over and kill someone!
I know how you feel though...our family room has a 9' ceiling, and.....you guessed it....our tree had to be 9'!
Merry Christmas to you and yours!

There's always next year for a twelve foot tree. Let us have hope! LOL! Snowed in with the grandkiddos....woohoo...your gonna have a blast!!!

Have a Merry Christmas and God bless ya'll!!!

My daughter has one of those super duper tall trees. Artificial, but beautiful. Too bad it is such a pain to decorate. It wasn't too bad when my ex son-in-law was around. He is 7 foot tall and it was a breeze for him to put the star on top. Now she uses a ladder and a circus balancing act to decorate. I still miss the smell of a real tree though. Even with all the trouble, artificial just isn't the same.

Go, buy, and enjoy. I am wishing I had another foot and a half on our tree as it doesn't fill the bay all the way. Great blog, honest thoughts and hope is out there to fulfill your dream.

I just happened upon your blog, it's GREAT!

Did you hurt him??

Dad alway brought us big trees because he and Mom would say, we may not be able to have lots of packages but we can have a big tree.

I know you are going to enjoy all the grandchildren!!!

Great story! I can't believe Far Guy cut off the trunk. Oh well, at least you will always have a great story to tell :) But duct tape? LOL.

Merry Christmas my friend. Enjoy your family and your SNOW!

You could always put a 7' tree on a box, cover it with cloth and then you have a taller tree. Have a Merry Christmas.

Your posts are always so wonderful. What a great story.

Have a wonderful and very Merry Christmas, my friend.