I have been collecting the old Shiny Brite Ornaments for a number of years. A few here, a few there..after all they are just little..and so pretty. I recall them on our tree when I was growing up. I loved how they caught the light and it was bounced back in all directions. I love all the different colors!! 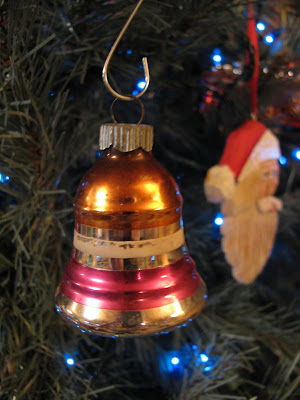 Some came from antique shops.. 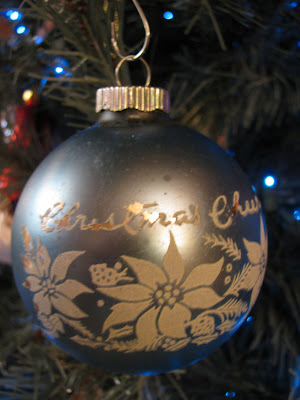 Some came from garage sales.. 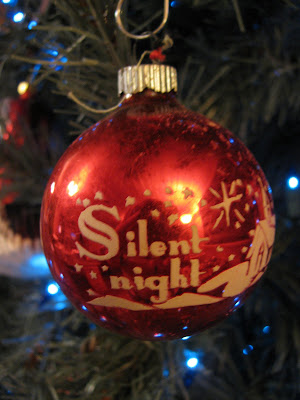 Some are one of a kind singles.. 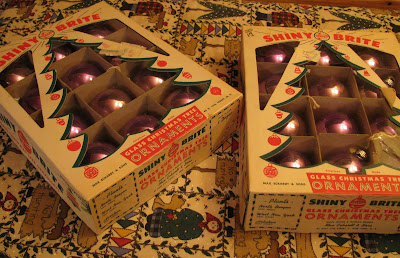 Some are sets of twelve.. these are special ones to me. When I was growing up we had a lovely neighbor lady and her very stern husband ..he was a Constable or a Deputy..he had a gun, he laid his gun and holster on the counter just inside the back door. Sometimes it was hung up near the back door..it had to be ready just in case he had to leave quickly. I remember the day that a few no goods tried to kill him by slitting his throat ear to ear..he didn't die. It was a miracle that he lived. He died a number of years later..he was a big man, I had the utmost respect for him..and I may have looked closely at his gun..but I never touched it. ( My nose may have been just two inches away from it to get a closer look..but I never, ever touched it.) I had cookies there often..it was only about a half a mile from our farm, and she was a good baker and liked kids that stopped by for cookies..they had a very spoiled dog..a Pekingese..I cannot remember it's name..I do know that I loved that their dog was allowed in the house. It was a big old farmhouse too..white..two stories and probably had a large attic. Anyway..back to the Shiny Brites..one day I was at a garage sale..this lovely lady was widowed by this time..she lived in a nearby little town if you can call it that..one of those blink and you might miss it towns. She lived on the east side of town..I stopped there at her garage sale one day..she was clearing out some of her "Junk." When I admired the ornaments, she said "Oh yes, those were quite the ornaments in their day." I bought both sets..I have hung a few of them on my Christmas Trees over the years. They are in their original boxes...I am not quite sure why I felt the need for two boxes... maybe just because I liked them...maybe it was the price..the garage sale price was 25 cents..the original price was a whopping $1.19..it is written in grease pencil on the package. The original strings are still on the ornaments.. just ready and waiting to be hung on a tree...but still two boxes..what was I thinking? 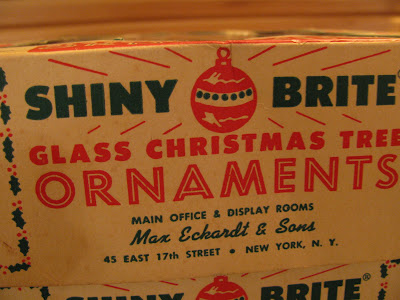 Shiny Brites were manufactured until 1962, more popular unbreakable ornaments took over about then. . Shiny Brite ornaments were originally made by Max Eckhardt. In the last few years a fellow by the name of Christopher Radco has reintroduced a new line of retro ornaments... they market the new line as a trip down memory lane. It is and was for me..the new ornaments ..are just that ..new memories in a box. Menards has them..probably other stores too.. I think I will purchase myself a box. There are lots of different designs..I imagine that I will have to stand there like an idiot for twenty minutes..looking at them..searching the deep recesses of my mind to see which ones evoke the most childhood memories:)
Posted by Far Side of Fifty at 10:01 AM

Gosh! I have some of those and I didn't even know I had something cool.

My mother had the shiny brite ornaments. Ya have quite the attempted murder story wedged in your Christmas memories. Whew, guns and slit throats and all. Gee, are you sure ya didn't grow up 'round these parts? I find myself snatching up all the childhood memories and dreams to decorate with and share with the grandkiddos.

Have a super day dreaming of an earlier time. God bless!!!

Merry Christmas! We still have a few of those ornaments kicking around too. Thanks for the memories.

We traveled so much when I was growing up that it's amazing any ornaments survived, but I think they did and that my siblings still hang some of them on their trees. I don't do trees any more and have lost any I had to begin with. So thanks for the memories! Nice Christmas gift.

My childhood tree was decorated with the Shiny Brite ornaments, and I distinctly remember the bell you have pictured. I only have one of my mother's ornaments, but I rarely display it: I am afraid it will break. It is deep blue with a silver glitter scene on it. Are memories as fragile as the ornaments that created them?

I bet that if there were three boxes, you would have bought them. I like reading about the shiny brites. I didn't know the history, I just knew they were classics. I saw a lot of old ornaments at the antique store in the canal park area. I didn't buy any but I will go back sometime. Nice blog. From ear to ear, wow.

I wonder if we had those types of ornaments when I was growing up and I wonder what happen to all the other ones!! Love the story about the man, gun and slit throat!!

Farside, you always make me look at old things through new eyes. I'll have to wade through the depths of my ornament boxes to see the old stuff again. I know I will have a new appreciation for it!

My mother has a 6' gold foil tree. She bought it when I was young and still uses it every couple of years. You'd have to know my Mom to understand why she has a gold tree. Anyway, this year my sister and I both decided that we want it someday! Go figure.

All so pretty - that is so neat that you remember Frank - I'm sure Steven and Leah would love to hear your stories..

I remember Grandma had some of these but I don't know whatever happened to them. I liked hearing about your neighbors and their home and dog. The neighbor man sounds much like our neighbor where I grew up. He was the prison warden and one of the few people I had ever seen with a gun. He was one of the town's few photographers also - he took that picture of me with the long curls when I was in the wedding when I was little. I have seen a few of these ornaments in antique stores but you were really fortunate to find 2 complete boxes. They really do look beautiful with the lights shining on them. Merry Christmas to you all.

We have a few...some from our family trees and some from sales, just as you did. They're mostly scratched up but we use them anyway. Memories.

I HAD some of those and gave them away......I wonder where they are now. Sheesh you could've told me earlier ;)

The Deputy got me thinking... and then the good baker definitely gave it away... Yes he was a big man. I wonder if to others he came across "stern" because the family talks about all the foolishness he was full of! And when any of the kids act silly or tease it is always said they are acting like Grandpa. Anyways interesting on the ornaments - I love old ornaments too!

Oh My Gosh Far Side -- what a nice visit -- and a wonderful gift! Grandma Grace would say "Oh my" - and would be stunned that anybody would want them! I love them and a whole set and they are purple! Wow... You have a special touch and I bet you got that from your Mom! Thank you so much!

Great ornaments.. but I'm still reeling from the poor deputy who got his throat cut...