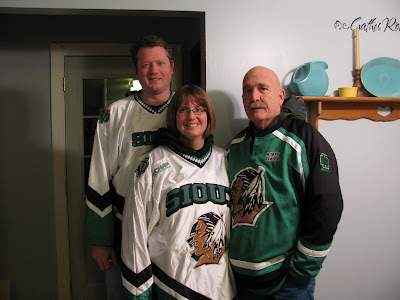 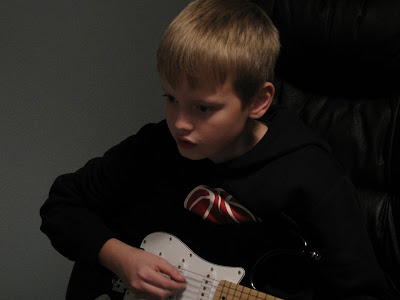 That sounds like a great time for everyone. I don't know the first thing about hockey, but of course Nalley is a big fan. That's a great photo of your daughter, husband and Far Guy. Now ping pong, I was pretty good at in high school! So glad you got to spend time with Adam and Noah - the movie sounds very entertaining. That's great that Noah is enjoying music. I hope he continues to excel and it will afford him many opportunities through the years. Thanks for sharing your outing with us.

Your family photos are wonderful. Your grandson is a handsome young man. You sound like a wonderful grandma. I can't think of anything better than spending time with grandkids. They keep us young at heart and are so much fun to be with. I have mastered the Nintendo DS and Wii thanks to my grandsons and even managed to beat them once.
I read about your scarecrow exploits. Too funny! You are quite the prankster.

What fun! You do have a wonderful family, Connie. I love the tiny little guitar, made just for little fingers. Lucky you!

A wonderful story. Beautiful family and a stupendous way to spend a weekend.

Great picture! Sounds like fun! I bet you had fun too -- just grandma and kids is good! Little family outings are wonderful!

Are you resting today? Sounds like your visit was a good one. And I bet the Hockey game was great at the "Ralph".

Wow, what a great time for everybody! And a couch big enough to boot! YEAAAAAHHHH!

Your grandson looks like a natural on the guitar. It is nice he likes music and works at it. We don't see hockey anywhere on tv down here even though we have had a local team, ha, most of them are Minnesotans, for many years. It is great that the boys had Grandma hang around. They grow up so fast.

Sounds like ya'll had the best weekend. That Noah is one handsome dude.

You have yourself a wonderful week and may God grant you many blessings!!!

LOL! No Grandparents Day this year? Connie, you didn't!
Sounds like a great time was had by all. We've seen that movie and loved it. We have actually seen it twice. Once with the grandkids and once just for us! :)

A proud Grandma, and so you should be!

Sounds like a great time was had by everyone. So glad you enjoyed the grandkids...

Sounds like a great time with the grands. I can't play any of those games either. I haven't seen the movie but I bet it was a good one. I love dogs.

I love hanging with family.....it's so comfortable!

You warmed my heart and made me smile and laugh and applaud you! I too have wanted to go to school and 'talk to the teacher'. I have to refrain because both Kelly and Misty ARE teachers and coaches and well...politcs are huge in school. BUT STILL.....

And you know what...it wasn't Blade, my grandson, I wanted to go talk about it was another child who has no one who cares. GRRR. I still may, but she is doing better with a MAN teacher who seems to really care about HOW little kids learn.