Trapped and a Panhandler

Pop on over to West Side of Straight to see what Chance has been barking at during the evenings lately. We assumed it was just deer that had him agitated..and there are lots of deer moving around..but a neighbor Al got this in his live trap. Exciting happenings in the neighborhood!

The deer are really on the move, hunting season begins this weekend. My dad was out yesterday to check out the heater in his deer stand. I may join him some morning with my camera. I got this photo recently at the end of our driveway. 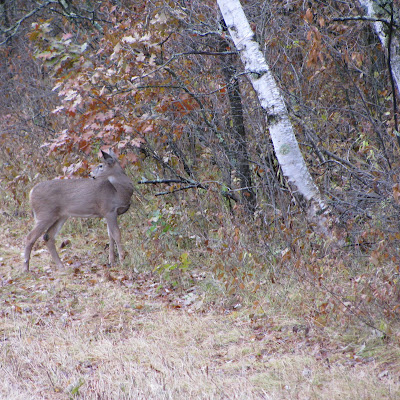 I had something happen the other day..that has me bugged. We were in a large town about 90 miles away. We were getting off of the freeway..I saw a gentleman on the median with a sign.. I zoomed in on his sign..he apparently was offended with my photo taking..as we pulled along side of him he lowered his sign and scowled at me. If looks could have killed..I would be deader than a doornail. I have his full photo, I cropped this photo...he is well dressed..he did not look broke to me..but then again..IF he was.. why in the world would he be offended that I took his photo. Personally I think he was just making some pocket change..and he was captured on film red handed and was mad. HA! Far Guy of course took the stance that the guy was proud..too proud to have his photo taken. What do you all think..proud or just looking for pocket change? 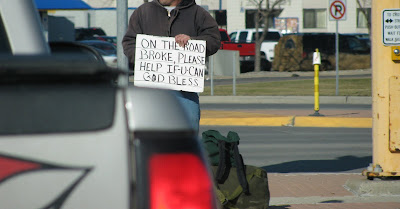 This brings to mind an incident that happened last summer in a larger town in the northern part of the Red River Valley. We observed a switch out..where one pan handler handed off his sign to another..is this a sign of the times? They were really working that corner. Do you ever give these people money? I never do..maybe if they had a white cane and a dog, or perhaps if they were playing music with a monkey on a leash:)
Posted by Far Side of Fifty at 10:08 AM

Labels: Bobcat at the neighbors, Panhandler

No wonder Chance was barking. We would too!
As for the panhandler - the Duchess says around the Portland area the panhandlers do that for a living. They have been interviewed on the news and everything. They make lots of money, work their own hours, and don't have to pay any taxes. Nice, huh? We NEVER give them money. If they are truly in need there are lot's of places in town that will feed them and help them.

I visited the link and was surprised to see a Bobcat. That is a bit scary for pet owners - too close for comfort. Keep that handsome Chance safe!!

I am too much of a skeptic when it comes to panhandlers. I know some are really in need, but how can you tell. If they are hungry I will buy them food, but I will not give money and have them using it for drugs or booze. I am with you on this guy's attitude. I think he was caught in the act of being sleezy. I disagree with Far Guy (sorry Far Guy) Once a truly needy person gets to the point that they are willing to hold a sign up and beg, they are no longer proud. Their pride has been lost long before that and they are just desperate.

I hope that bobcat is going to be all right - like let go somewhere.

As for panhandlers, I've been told if you want to help to give your money to one of the homeless shelters, which is where they should be going for aid.

We don't ever give to these people - I know of too many places willing to help those in need. For one thing, most cities/counties have ordinances against people doing this - it is a traffic disturbance. The local authorities should advise these people of that and send them on to legitimate places that can safely help them.

Poor Chance had a good reason to be upset. No, we don't had out money. We have offered a meal in a nearby restaurant but they always turn that down. They just want the cash.

I love to spot deer at the edge of the woods. We will miss seeing the coyote that came a cross the hay field in early morning light, we saw him on the highway the other day. We have bob cat but only hear them sometime in mating season. Chance is a good watch dog, he knows.
Patsy

Good boy, Chance, keep those boogers away from your family.

We don't give to these people but we do give to mens missions, and womens shelters. I refuse to give in fear that I'm supporting an addiction. We had a man tell us he was a diabetic and he needed money for insulin. We did not give to him since I felt he was lying. I asked around and I was told if he went to any pharmacy or ER they would give him a shot if he had no money.
We once had a woman approach us in a steakhouse and she asked for money to buy her baby diapers. We told her to wait until after we ate and we'd go buy diapers for her. She disappeared.

Hi Connie...I am testing to see if I can get on your blog with Internet Explorer once again. God it's driving me crazy! Hubby tells me it is the way your blog is set up. The comments are imbeded into the blog rather than having a pop up window...which is a setting I guess in your blog. Sorry I can't get here...it really bums me out and I hope you get this one!!

I believe I was in that town today...and saw the guy or at least the same sign.... poor pitiful bugger doesn't have anything better to do.... I wonder if he counts the passing..... cars!

I like to believe the best of everyone - so I agree with Far Guy: bet this dude was too proud to want to be photographed.

Unfortunately I do give to panhandlers. I just can't have money in my pocket and not share it. I really try not to, but I just can't help it. It seems wrong to keep it when I wouldn't miss it, and it might be the difference between being hungry or having something to eat. It's a guilty secret I'm sharing here.

It does appear to be a racket around these parts, husbands that are out and drive the same routes often enough have come to recognize certain fellows at certain times in the same spot. And we have witnessed a "shift" change and the fellas leaving in a van driven by someone else. But most of these fellas really look homeless, whether they are actually or not hard to say.

Sometimes when I see fellas like yours, young, apparently able bodied, adequately dressed, I wonder why they are doing it, are they out traveling and came up broke with no credit card? Or doing a college project? Or just seeing if they can get money out of folks?

I'm a little frightened by some of them. My husband always said it wasn't his place to judge, but I remember him going around the block in Denver to pick up a burger and hand it to a guy who said he needed money because he was hungry. The guy looked at him like he spit (read it however you like) in his hand.

That is my first time to see a Bob Cat. They are around, but mostly in the mountains. We have had mountain lions walk across our place leaving scat and foot prints, but moving on(THANK HEAVENS).

My uncle said he knew a millionaire that made his money sitting outside a factory. That story always makes me stop and not give. Sorry.

When we lived in a large city downstate, I wouldn't give directly to people, but will offer to take them and buy food, gas etc. In many years, not one person has taken me up on that offer. Since we have moved to a small community in the UP word gets out who needs help etc and that is the only time we directly help. A couple of bags of groceries, small toys for the kids, and anything else we can think of, mysteriously shows up on their doorstep along with an envelope with a couple of bucks in it. Another thing that I add to it is shampoo, cream rinse, deodorant etc. Those things mean a lot when you are in need.

there seems to be some organized panhandling -- I see it near my daughter's home in Portland, OR.

I even see the same woman begging for "Gas" at the three major grocery stores in our small town.

Does she think we don't bargain shop and see her switching venues?