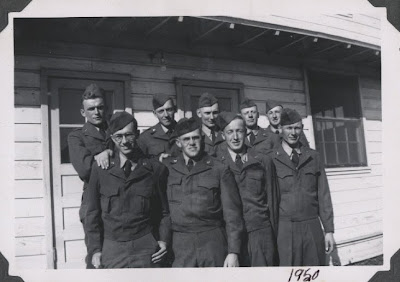 This is a photograph taken on November 27, 1950 at Camp Pickett, Virginia.   My Dad is the young man in the front row on the far right.

My Dad was fighting in Korea when I was born.  Some days he talks about the war, and some days he doesn't..as he gets older he talks more about how young some of the Chinese were..some were just kids about twelve years old.  This morning he stopped by and told me about the time that they had 10,000 of them surrounded and had their escape routes blocked off, when they ran out of rice they started coming out.  They took them as prisoners, they gave the young kids chocolate bars.

Dad was at the lumber yard yesterday, he has Korean War Vet license plates on his truck.  Dad said " An old guy with no teeth asked me who I was with in Korea. So I told him."   The toothless old soldier replied "WELL, I was with the Rangers."   My Father said " WELL..we had to clean up and pick up after your Ranger Units over there."    The toothless soldier turned and left.  See..my Dad is picking fights at the lumber yard!  Dad told me that his unit was technically a Ranger Unit for a few days after they picked them all up.  He also said "One of those Rangers was shot, and going into shock.  I looked at his wound.   I slapped him and said what's wrong with you?  It is only a flesh wound.  The poor bugger would have died..from a flesh wound."

Another Veterans Day is upon us, a time to say Thanks Dad, Thanks Far Guy, Thanks also to my brother and my nephew.  If you are a Veteran and reading this..Thank you:)
Posted by Far Side of Fifty at 10:08 AM

Good afternoon Connie, What a nice header photo for today. I loved seeing the photo of your Dad also. I salute your family members today also. God bless our Troops.

I see where you get your spunk. Chip off the old block. "picking fights at the lumber yard" I like your dad and his attitude. Sounds like a great guy. Love the story about the flesh wound - too funny. A big thank you to all our veterans!!

Now I see why you are who you are! Wonderful!

Thanks for sharing your feisty father with us. Also for giving us the opportunity to show our appreciation to all who have served our country in the past and present so we can enjoy the freedom we are blessed with.

Have a terrific day!!!

Thank you Gene, Dad and brothers. We so appreciate your service to our great country. Love the header.

Thanks indeed. And I love your 'dad' stories, they put a smile on my face!

Amen! Thank you to all of our Vets. Just think where we would be without them and their sacrifice. I am also grateful to their families.

THANKS TO YOUR DAD AND relatives for serving. from one Veteran to another!!! Thanks for sharing this story!

Thanks to your dad and all in your family who served to protect all those in my family!

Nice story about you Dad. As to eagles well overall I love them in spite of some of their nasty habits. Perhaps Franklin was right and the turkey should have won the nomination. Here in the southeast and inland from the Big River they seem to be surviving in areas without lakes by replacing the turkey vultures in winter. btw I did a post a few monts back on the hardworking fisherman Democrat Osprey and the Wall Street robberbaron Repblican Eagle. I watched the episode down by Winona for almost fifteen minutes. I bet you can guess what happened!

the older i get the less i can fathom what they went through.

Love your header and story about your dad, good looking young guy.
Patsy

Sad to hear about how young the soldiers were. Always reminds me that war doesn't decide who is right - it only decides who is left...

I can see where you get your spirit from! :-)