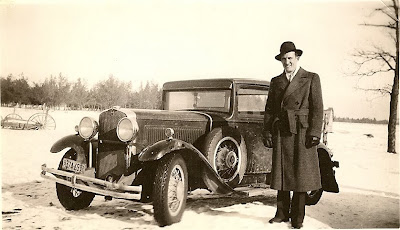 This is a photograph of Far Guys Dad. The car is a Willys Knight from the late 1920's (according to Far Guy) I have no idea when the photograph was taken... I would guess in the late 1930's. I have not been able to come up with a better date than that. Perhaps a relative knows.. If anyone out there can date the car more precisely..just leave me a comment.

I have many photographs of Far Guys Dad and cars. He loved cars. He loved looking at and talking about cars. In the eighty years that he lived (1914-1994) he had lots of cars. I think he must have made the rounds to all the car dealerships when all the new cars were released for the year. Car dealerships used to print out wonderful brochures, he stored them in his magazine rack next to his chair. Sometimes they would be all spread out on the floor. He could car shop from his chair!

When I was on a quest for a new to me four wheel drive vehicle back in 1987, it was just natural for him to accompany me on my quest. We spend days looking and comparing. I think he was just a little bit sad when I found the vehicle I wanted..our days out and about vehicle shopping in Park Rapids, Wadena, Perham and Detroit Lakes..were over..shucks..:)

What a wonderful memory you have with Far Guy's dad!

I bet he loved car shopping with you!

What a fabulous car!

I LOVE that photo! And the hat and coat he had on. We have some of our dad's that are similar. Those were the days when men were men, right? They dressed up for everything. We have an old classic car show here every year and I love looking at the old cars!

My grandpa had a passion for automobiles too. It's funny to think what each of us will be remembered for! I tease my extended family, they will only remember me for my sweet tea!!!!

Love that car!!! I am jealous.

What a wonderful photo...so much character to it! My grandfather loved cars too!! :)

Far guy's dad was quite a looker. It almost brought tears to my eyes reading about him and your days of looking for a vehicle together. I miss my folks so much. Were'nt you lucky to have such a warm and loving relationship. I really like your Wistful Wednesdays...nice touch.

what a fun memory to go along with the photo.