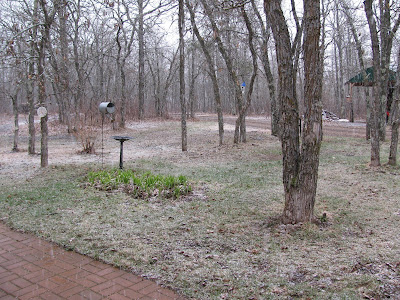 Yesterday late in the afternoon, it started to rain, thick icy cold rain that turned to ..SNOW. Now whose fault is this fine howdy- ya-do? It might have something to do with Far Guy, last Monday he was being a smarty pants and put away his snow boots, and his lined winter coveralls. I told him he was pushing it. Yesterday he moved my snow shovel from it's spot right outside the front door..to the garage. One hour later it began to snow. So clearly the snow must be all his fault. The only thing I could have possibly done was to take down the Christmas lights and the swag, and the Christmasy snow picks with packages and reindeer on them.. oh and I changed my flag..bluebirds seemed more appropriate than geese with red bows. I still think the shovel moving was what pushed ole Mother Nature over the edge.

We had ONE lovely day of summer, it was actually hot on Thursday..77 degrees here, the neighbor had 83. He is always either warmer or colder than we are. I wore my crocs without my wool socks! We slaved away moving leaves, some were mulched, some were raked or blown into the woods. Far Guy was waging war with the sand and rocks that get on "the lawn" during snow removal, and wandering around with a bag of grass seed. Far Guy is way more particular with the lawn than I am, he grew up in the city, me in the country..that might be the big difference in our "lawn" ethics.
Just for the record I have not put my snow boots away yet..I wore them yesterday:) 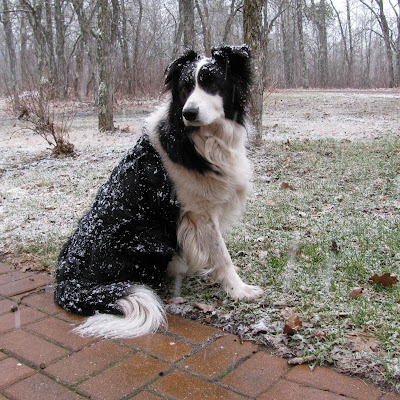 I can't believe you have snow! I with you on jinxing it though...I don't take my snow brush out of my car until June...just to be safe! :) Such a great photo of Chance, too!

Oh, that's depressing! I haven't talked to my nephew in MN but I bet he is so sad!!! At least you took a beautiful photo of Chance. Even he look disgusted with the weather.
Hope you both are feeling well. Take care.

That should be against the law!!! Winter should be gone that's for sure. It has been beautiful here that last couple of days. I hope we are done with crappy weather.

Often what happens there just shoots straight down to us here in Missouri -- it better not! I just put my plants out on the porch. The dog is gorgeous -- somebody must spend a lot of time grooming it.... thanks for the link to the loon cam, although I was feeling a little queasy watching the nest bob up and down.

My snow shovel is sitting out in sight with bluebells blooming all around it. I have no intention of putting it away. We too have had ice storms in past years that take the tulips and whatever. I remember heavy snows on May day, so I don't start a vegetable planting till after the first week of May. Stay tough!
You have a neat dog.

It was upper 80's here today, but if you got snow, that probably means more cold weather is coming....

Connie, I love your post labels...hilarious one about Mother Nature :))
Weather here was 110 degrees yesterday. I find it hard in April/May and usually go somewhere else, but right now, since the accident, we wanted to be home to heal...so we had an air conditioner installed :) Thank God for that...
xx

LOL I think like that too. Some things you just don't mess with. You and your camera are taking some great pictures.

It almost always snows when I give Bear Bait a haircut... But I swear, Far, we just did hair & beard-cuts a month ago, and didn't have nuttin' ta do with this one!

are you **sure** you're not in montana... here where we got another couple of inches and only forecast for another 12 over the next week.. ...

blessings
GP who wore her muck boots down to the horses this morning. My winter gear might, might get packed away june :)

What a gorgeous shot of Chance - really wonderful!

As for that naughty Far Guy - do NOT put your snowboots away until June!

Oh Connie I know of what you speak living in Maine where the saying is always..."if you don't like the weather, wait a minute." We have had 37 degrees at night and 80 degrees during the day the last two days. The body has a hard time getting used to it. We need it to be gradual to acclimate our bodies. I am either sweating or freezing lately! As soon as I saw that photo of the cold rain I recognized that look! I see Chance got in there with his "snowy" costume on. I am not sure what it is about that little guy but I've fallen in love with him...pretty hard too...when I see his photo my heart misses a beat! Hugs to chancey...thanks for your wonderful blog and sorry I don't get here that often....life's been busy lately.

Awh, what a beautiful photo of Chance, with the snow flakes on him. I love it! Hope you're getting better weather by now!!

Oh Chance, you are so handsome it makes my heart sing!!!