Easter With The Girls 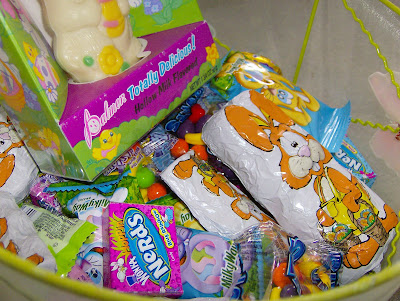 We have two daughters, our eldest Trica has three daughters "the girls" and lives an hour away. Jen our youngest has two sons "the boys" and lives two and a half hours away. Jen can drive it in two hours..I think she may have a heavy foot. Jen and Andy and the boys went up north to Andy's parents for Easter. The girls are 12, 10, and 10 for a few more days.. Trica calls the two youngest "Irish Twins" since they were born almost a year apart.. nine days less a year..she was a busy Mom when they were little..come to think of it ..she is still a busy Mom. By the end of this week they will be 12 (Savannah), 11(Madison) and 10 (Paige)..so we celebrated birthdays too!
First off we were told that "You have to believe to receive" as they showed off their chocolate filled Easter Baskets..all of them now know the Easter Bunnies secrets and will not ruin it for their cousin Adam. But they are pretty sure that Noah knows the real scoop.
The girls had a Seder meal at school last Thursday. It sparked lots of interesting conversation during dinner. I have to sit next to Madison at all family meals..she always says "Grandma..you need to sit right next to me." It is my spot..and I would not think of sitting elsewhere. We used to do this when they were little to keep them apart..it just became tradition..Savannah next to Far Guy and me next to Maddie. Paige next to her Mother. It is like assigned seating! Anyway the Seder meal according to the girls.. There was grape juice, but the adults had wine, I don't like wine.. do you like wine Grandma? Then there was salt water, and you were supposed to dip your celery in the water, YUK ..the salt water was supposed to represent the "Sweat of the Apostles" YUK..who wants to drink sweat anyway.. It was just gross..some kids just chugged it down.. ( Trica said..I don't know how healthy it is to drink salt water.. Richard said ..I don't think it was sea water or anything. When I asked Richard about the Seder meal..he said " I don't know a thing about it..all I know is I eat fish on Fridays) And there was lonesome bread.. (Really? maybe it was unleavened bread, because they didn't have time to wait for the bread to rise before they left) ..yah it was lonesome bread, bread that doesn't do anything. The horoseth was terrible.. Have you ever tasted horoseth Grandma? (No, can't say I have) Well let me tell ya, you won't like it either. ( It may have been horseradish instead of the ground up apple mixture).. Did you know that they found some nails and a cloth in the tomb? Ya, it was really cool, and the cloth had the perfect imprint of Jesus face.. it must have really hurt to be hung on that cross..
With three little girls all talking at once..it was quite a round table discussion. We had a lovely meal, ham, scalloped potatoes, fresh asparagus, freshly baked bread and birthday cake for desert. After dinner, Richard hid 48 eggs in the yard, while I tried to keep them from peeking out the windows. Chance had a blast helping to find the eggs.. it was a giggling, running good time:) 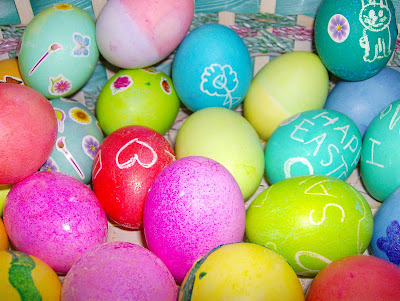 Labels: Easter thoughts by the girls, The Girls, What a joy to be a Grandma

It sounds like you had a wonderful Easter. The basket and the eggs are so pretty! I can just imagine Chance having a grand ole' time!

What a great day! You made me feel like I was there!

Far Side, those eggs are the obvious work of "the girls." Very creative and pretty! I have fond memories of Seder meals from my youth. I loved the symbolism of it, even though I, too, wasn't impressed with the "appetizers" in terms of taste. Loved the lamb dinner at the end, though. I also love the lonesome bread concept. How cute is that??? Thanks for sharing these special memories with us. I could picture all this going down, with Grandma as the main listener/interpreter. :)

I can just hear all the chatter....glad they made it home for Easter.

Good to read you had a lovely Easter..
Nice to have family together at this time of year..
Julia ♥

What a wonderful time you had with your grandchildren!! I am soooo jealous! I want some...heck even ONE!...grandchild! My kids are not ready yet I guess and I can't push that one! Funny...we had a birthday/easter too! Birthday cake for dessert too....I made it...carrot cake with cream cheese frosting. Loved your Easter story about your little ones...thanks for sharing.

what a great Easter you had. Grandchildren are wonderful.

Hi Connie - Belated Happy Easter. We stopped in Sun afternoon, and Hooch was looking for Chance. Figured then that you were w/the girls. Glad you had a nice Easter w/them. So glad I'm home, will talk soon, jo

Connie~ Such sweet granddaughters you have!
And I can tell you are ONE SPECIAL Grandma too!
Great memories for the girls and the whole family always when we gather 'round the table!

My grandchildren live a distance away so when we do have family gatherings, lots of pictures are taken! I love the hustle and the "everyone talking at once chatter" - I actually yearn for it at times.

Life moves by at a very fast pace so we must cherish every single minute!

Oh, I love family chatter like that around the table! Sounds great fun!

Our Oscar found one of the chocolate Easter eggs that we had hidden... he wasn't sick though, which was a relief.

What a great day, what great girls! Thank you for letting us spy on your precious time! I now have a pleasant smile to head off to bed with!

smart smart smart to count the eggs. I can remember finding a stinky egg every so often mid summer. ha ha