We drove around a bit and admired the frosty trees. 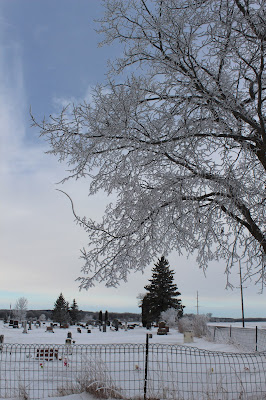 We recycled...it was a fairly warm day so it was a great day to catch up with that chore...we had a number of cardboard boxes that Christmas gifts were in.

Far Guy gave me a pair of Navy Blue snow boots... Bear Paws they are the best warm boots I have found...and some Cashmere yarn is on the way.  I gave him a repair manual for his new old car and a seat cover to cover the front seat...as all the upholstery is original and he wants to protect it....and also a garden bench that he can use to sit or kneel when working on his new old car.

I shoveled a bit by one of the garages and my baby brother, his bride, their daughter, son in law and three grands along with Baxter came for a visit out on the patio.  The hiked over, they said that a number of deer were out playing behind our house.  Baxter Fluffball is a pretty smart little pup, he comes at a run when called and he knows sit and they are working on down.

We began puzzling.  Jen and Andy gifted us the same puzzle so we join them via Facetime to puzzle together...right now they are ahead of us! 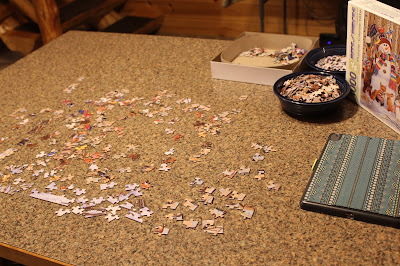 I haven't done a puzzle in years.
The weather did get nicer yesterday! And now we are looking forward to a big snowstorm this week.
Well, winter is here!
Sounds like you got some neat things for Christmas.

I love the photos on your header.

How fun to put a puzzle together via Facetime!! I love the idea. I love your picture of the snowy cemetery. They always look so peaceful to me. There's a cemetery we used to pass on the way to our oldest's house... and there are 3 houses built "in the backyard" of this cemetery. I always tell my hubby I'd love to live in one of those houses, with my kitchen window overlooking the beautiful cemetery. It's a neat little cemetery & well cared for. Really pretty to me. ~Andrea xoxo

What a good idea to puzzle together. Karen

What a fun idea - to work on a puzzle at the same time via video.

All sounds right in your world.
Shared puzzling is an interesting concept.

Sounds great! The frosty tree is so pretty. Hurry and catch up on the puzzle!

I know that puzzle! It is one of the ones I sent my Mom! Sounds like you and Far Guy did great in the gift giving. Do you have enough snow to try out the boots (we don't but not complaining)?

I got myself a puzzle for Christmas. Now I remember why I don't do puzzles. I stayed up all night because I can't leave it unfinished.

There is a puzzle on our coffee table too. And it just might be one of the most difficult one I've tackled. We got a dusting of new snow overnight so our pine trees in the backyard all look picture perfect this morning.

How fun to FaceTime and work on the same puzzle!

What perfect presents for the both of you! Nice to have a warmer patio visit. Doing the same puzzles via facetime...what a clever idea. Have a great week. :)

We finally got snow on Boxing Day... only a couple of inches but it is snow!
Nice that you had family time and that it was nice enough outdoors for that. Ted and his family did a Zoom call with their dad who is 88 years old. He was quite bemused by the new technology.

What nice gifts you gave each other! I'll have to remember those boots as I don't have any for when I move North...oh, I have some farm boots but they are heavy and not really practical for living in town or going out in public! LOL!
What a great idea to puzzle together and have a little contest. What's the prize?
We always did puzzles around Christmas. You and Iowa are supposed to get a humdinger of a snowstorm this coming week from what I hear. We're supposed to get rain and snow showers which means it could be freezing rain. I'm going to get groceries Tuesday before it hits just in case. Stay well!

It sounds like you each had some wonderful gifts. How smart of you to find a repair manual for Far Guy's new old car! Your new boots sound wonderful, and warm! I received a puzzle for Christmas too and I'm looking forward to getting started on it. I hope you both have a relaxing and enjoyable week!

The frost and snow are pretty. We have had two cold nights with a 73 degree day on Christmas Eve dropping to 27degrees that night. The birds are ice skating on the bird bath. Guess they are southern birds and don’t know what to make of it! I have a happy snowman puzzle similar to yours. You have reminded me to get it out this week and do it.

Love the sound of your snow boots - actually, it sounds like you both did well with presents. The frosted tree is very pretty :)

Doing a jigsaw puzzle together on Face Time is something I haven't heard about before, but why not? It's a fun idea.

That's very innovative, to do puzzles together but apart.

That picture makes me cold just looking at it. Those were perfect gift you two got each other.

Now that is genius! Both working on the same puzzles in two different locations. What a great idea! :-)

I have never had the patience for jigsaw puzzles they always look good though.

Holiday Tradition my Wife's family has... Puzzle for he Holidays.

Love the beautiful frosty trees in your picture. What a fun idea to puzzle together! Sounds like you both got wonderful gifts for Christmas. And had some wonderful visitors too. Hope you have a great week coming up!

That is a great idea for doing a puzzle ~ one thing all of this has done is sure made people creative and think out of the box!