No oranges..and I like an orange for breakfast...good thing I have a few extra in the fridge and I have a few containers of grapefruit...so I will get by.  No slices of ham...and the 2% Milk ordered became Skim  Milk.  Like I said always an adventure.

After I picked up groceries curbside at two places I dropped off a letter at the Post Office Drop Box and went through the Drive Thru at the bank it was time to pick up Far Guy.

There is more than one way to skin a cat...we waited and waited at the local Meat Market...when we got there only one vehicle was outside...so I waited patiently for that person to come out and while waiting three more people went inside....it is a small shop ...they could not be social distancing inside. So I called in my order and said I was outside waiting and within a few minutes my order was delivered to the vehicle.  Far Guy said "Well that was slick."

Cookies...I was going to bake some...and then there was a delivery to our front door. 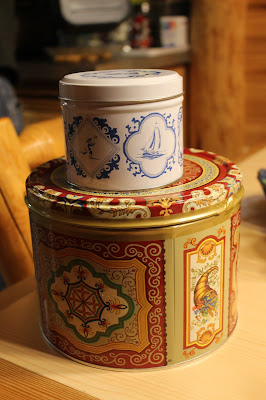 Beautiful tins!  The bottom tin is filled with Swedish Gingersnaps that are really yummy.  The top tin has a Dutch dessert called Stroopwafel  two wafer like cookies with a caramel cinnamon filling inbetween the cookies...to die for!  Both gifts from a special blog reader Kay!  Thank you Kay!

So I may be short of oranges and ham but we have lots of cookies!

Those tins are beautiful. Why does grocery shopping always have to be an adventure? I still go inside, but early in the morning. I never get everything I have on my list because they are always out of something. Why is this? Never used to be that way. And, the items they are out of make no sense as they aren't popular items. Oh well, I should be thankful I get what I get.

What a nice gift from Kay, as long as there are cookies who needs the other stuff? ;)

Such pretty tins AND filled with cookies. How nice!! I may have to venture into the actual grocery store later today. I want to look at some things before I decide to purchase. Mostly I've been satisfied with my online orders however.

What a wonderful delivery! The cookies sound scrumptious! Shopping continues to be an adventure, doesn't it?

Seems they are always short of something when we get groceries, too. But seems like you are short of more items more consistently. The curbside deliveries are the best!
So sweet to get the cookies!

And appreciation, thanks for having your blog and keeping it up. Very interesting!

Those are beautiful tins and the cookies are a BIG plus. I haven't baked one cookie this year. I should try to change that but I just can't seem to muster up the effort it takes.
I'm always missing something on my orders but we make do. I don't need to do an order this week at all.
I hope you have a lovely Friday and stay warm.
Blessings,
Betsy

Lovely gifts! I must look up a recipe for Stroopwafel, they sound delicious.

Glad you got everything done you needed in town. Take care, stay well.

I’m not a fan of skim milk - too watery for my tastes, so I’d probably add some powdered milk to the container and give it a good shake! Stove Top stuffing is out of stock here as well as animal crackers.

I am really jealous of your cookies but I could not eat them anyway. I am seeing pep with fruitcake and I can't do that either. We are out of oranges too. We did our run and forgot them. I am glad the meat market did their thing.

Those are such wonderful tins, and filled with fantastic cookies! I'm also glad that many of your readers are sending you these appreciations. I'm fighting off the guilt for not being one of them, but I really really appreciate you and FG even if I only say it and not acting on it. :-)

The main thing is that you have lots to eat.

Gotta do what you gotta do, huh. Love the tins! All is well as long as you have cookies lol.

Those cookies sound wonderful. My daughter shopped for me for a while after Tom died but now I am going out once a week. I think I will stop going to Walmart. The last time I went even one of the checkout women was not wearing her mask over her nose. We have a Kroger and a Meijer so I will go to one of them. I like to see what I am getting and substitute if something is missing. But I don't have health issues like you and Far Guy have to contend with.

What a lovely gift! I love the tins also and they can be so useful. It's good to have your shopping day behind you. I got mine done yesterday as well and I'm just starting to get gifts wrapped. May you each have a wonderful weekend!

DJan's comments reflect my own thinking. A bit of guilt and a lot of appreciation for you and for all of the kindness that you show others and others show you.

Hello! I have read your blog for several years but never commented. Stroopwaffles!!!! They are absolutely wonderful if you find a coffee mug or cup sized so you can set the stroopwaffle OVER the hot coffee in the mug. It makes the caramel sort of soften and is absolutely delicious!! We get them at Trader Joe's. So, so good. I hope you have a very Merry Christmas. I am so glad you are both staying so safe. You are an inspiration for many and could be a poster couple on how to do things correctly during these crazy times!! Chris in WI

What's nicer than cookies? Cookies you don't have to bake yourself....especially when they come in such pretty tins!! I love all pretty tins and have collected far too many.

We always have stroopwafel in our house. They are so good with coffee. Very nice tins. I remember my mother had one like the larger of your two. I'd love to know who has it now.

We've had the Swedish Gingersnaps in the past and they are really quite tasty. Also have stroopwaffles. I prefer the gingersnaps, but a stroopwaffle with a black cup of good coffee goes a long way on a cold morning. I don't always comment so will wish you a Merry Christmas now. Really enjoy your blog and you and your husbands artwork. I too live in Minnesota but father south in Princeton. We have not had much winter weather yet and I, as I get older, am just fine with that. Ranee

OMG!!! Those cookies sound wonderful! I'm going to google the names and see if I can find the recipes. I am a cookie nut! I love your Swedish Browns! I went grocery shopping today too. I think I am set for the holidays. I'm not going to make anything special except for Christmas cookies. I have a full menu still so it will probably be stuffed peppers! LOL! Have a nice weekend!

Cookies are VERY important. And Cheryl says she would send treats if she had your address. ( We still have 6 "goodie bags" for people in town... but we do not know any more!) We already delivered them to everyone we know. 6 bags of temptation... for me! ( but not for me...)

Mmmm those cookies sound delicious! I make Viennese Crescents- the only cookie this year. Fruitcake and Mincemeat too, I buy the frozen tart shells ands make a few mincemeat tarts at a time.

Oh lucky you.....lots of cookies in beautiful tins! Sorry about your oranges and ham .....maybe next week! We had cookies arrive here this week too! Plus a few other fun things. Christmas is coming fast....hope you got your letter in to Santa!

What a joy! Tins of cookies! I have to share that I was in Costco and picked up a bag of these oranges called Cara Cara - I didn't have a clue except they were seedless which I like. I like both oranges and grapefruit and these are a cross between. Not as sweet as navel oranges but oh so yummy.

What beautiful tins... and to have them filled with yummy cookies!

Oooh! Stroopwafel! That stuff is addictive!