Someone famous looks like our son in law Andy.  Andy is constantly being asked to take photos with fans.  He is a true doppleganger.

They say we all have a twin out there…someplace. 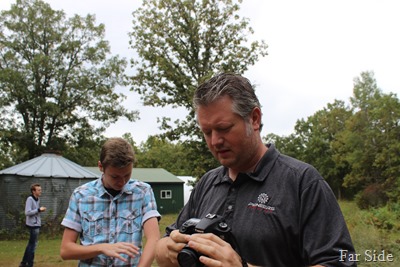 When we last saw Andy he was excited about the upcoming weekend and told us of his plan.   His adoring wife said “I am not bailing you out of jail!”  In fact she did not attend the concert with him…instead his brother Carl and sister in law Roberta went along.

“The Blake Shelton Concert was entertaining. I now know what it it’s like to be famous. So bear with me as I go through a narrative of my experience at the concert:

Inside the Fargo Dome I immediately drew a lot of attention. People were swarming around me with their phones in-hand snapping photos of me. Groups of girls erupted into screaming frenzies - its Blake!. Some posed for selfies and they were honestly trembling. Others saw through the guise and said " I don't care that your aren't Blake, this will make my friends go crazy". Some walked up to me and told me that they were cancer survivors, that they loved the Voice, that they loved my music. At times I felt bad for leading them on, and other times I felt good about giving people an experience. I acted the part without apology, waving, giving high fives, trying my best to do Blake's signature "pick me finger pointing". It was fun running into people that I knew. They had a good laugh at all the attention. Rumors of the fake Blake were circulating.

I’ve always said, "Act like you own the place." Without a floor ticket I walked unquestioned onto the main floor and continued to stage right. My brother and his wife followed. About eight security / Fargo Dome staff let me pass without question. At this point my brother and his wife are separated from me. I don't look back. A guy in a red shirt and a headset ran up to me and escorted me back stage. He walked ahead of me gesturing to others in the hall to move aside. About 20 people followed his instructions respectfully moving to the side and giving me acknowledging head nods. I walked past some sort of computer control center and the man in the red shirt pointed me to the corridor of dressing rooms. I was in disbelief. In the corridor there were signs posted for each rooms - Blake's Massage room, staff, Raelynn, food, etc… The corridor also had Fargo Dome staff seated at a number of the doors. No one said a word to me - just nods and facial expression greet me. I read the signs while passing through the corridor searching for Blake. I walk confidently so as not to give myself away. I reach the end of the corridor without any luck, so I duck into the buffet area. Four guys are standing around, they greet me, and I grab some food. They try to engage me in conversation, and I deflect and exit to the corridor. I figure this is my last attempt. I open a door and find no one is around. Then a guy dressed in black meets me, He looks puzzled, then displeased and asks me “what are you doing here”. We walk to the hall, knowing that I am done - likely to be removed from the concert. He points to the other staff to remove me from this area. Without out question I walk quickly out. Funny thing happens next. The guy in the red shirt meets me and escorts me out. "Going out for another walk Blake?" he asks. I walk out back to floor and wave to excited fans and make it back to the concourse. I pause and share the back stage story with my group. Unreal.

We walk back to our seats, met with a barrage of rushing fans and smartphone attention. Before we get back to our seats, security finds me. I am given a stern warning to stay in my seat by a large intimidating gentlemen. I abide. I had pushed my luck too much already. Sitting in my seat I am still accosted by fans coming to me. They want a photo with the fake Blake.

To the Fargo Dome staff, I apologize for any grief this has caused. To all the fans bamboozled by my shenanigans, I meant no harm and apologize to you.

To Blake Shelton I would love to have a beer with you sometime.”

So there it is.  I was hoping that he would get to meet Blake…but alas that was not meant to be…can you imagine if they had met up in the hall?   For the record Andy was born first…he is eleven months older than Blake.  That’s why I say Blake looks like our Andy.

As for going viral, the Facebook post I shared with you has been shared over 600 times in less than 8 hours.