It is the end of another week.  Not sure what was accomplished this week other than the usual…mowing, laundry, cooking…  repeat when necessary.

Thursday is the day we do the infusion to treat Far Guys Alpha 1 Antitrypsin Deficiency.  We don’t plan anything for the entire day except the Infusion and a nap. 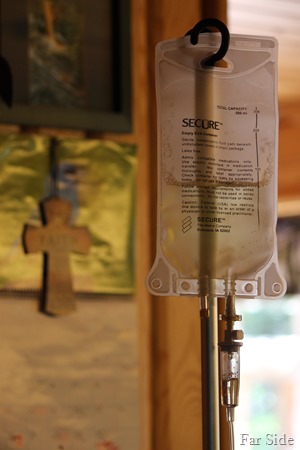 I encourage him to drink water until he floats away the day before and the day of the infusion.  Infusion time with the gravity drip is around 18 minutes right now…it was 14 when the port was brand new. Most days we get a blood return …but sometimes not. Every few weeks the Pulmonary Doctor has his Nurse check on us to see how we are doing.  We have the “stuff” to do an IV if we cannot get the port to flow.  Our daughter or niece can do an IV for us or we can go to the Infusion Center or to the ER.  We only have a three hour window once the “stuff” is mixed.  We mix after the port is accessed but that is no guarentee that it will gravity feed.  So every Thursday we breathe a sigh of relief after it has all been accomplished.

Far Guy can do the whole procedure by himself. He doesn’t need me to help…but he kinda likes it when I do. So far so good with the infusions, they are keeping him healthy although we still have to avoid crowds, germy and perfumy people.  The infusion solution costs $1,320,000.00 a year…it is a good thing we have insurance. It would be much more expensive if we went through the Infusion Center weekly…everyone has to get a piece of the pie.  Too bad I cannot bill someone. The infusion solution has been called “liquid gold.” 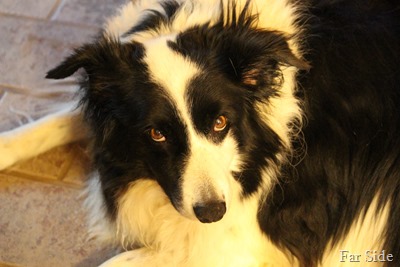 Does Chance look grumpy?  Well he was.  I had just scolded him for licking his owie which is mostly healed.  He is over his ear infection…finally.  He is sleeping more and still has troubles going up and coming down the steps and he is stiff when he goes from laying down to sitting and than walking.  He takes “stuff” for his arthritis in pill form and on his food.  In two months Mr Grumpy will be 12 years old.  He is becoming quite particular in his old age…routine is his middle name…he likes his walks but only so far and sometimes he picks one of us over the other to make that last outing at night. (He refuses to even go up the steps if it isn’t the person he wants.)  Silly dog.