Fifteen years ago today I was in Mapleton North Dakota.  Adam was just eight days old.  I was there to watch Adam while Jen taught a class.  I think Andy dropped Noah off at daycare.  Jen and I were having a quiet morning when the phone rang…it was Trica calling from Lombard Illinois ( a suburb of Chicago)….she said “turn on the TV.”   So we did.

The horror on the East Coast unfolded before our eyes.  I held Adam and wept because the world would be forever different for him and his brother.  The day care provider called and said “I cannot watch children anymore today.”  So we went to get Noah.  Jen’s class was cancelled.  I packed up and headed home, I needed gas and stopped at a gas station…a fellow there said “Use your charge card… you will never be charged.”  Huh?   I didn’t feel safe all the way home…I was on edge…what would happen next?

We live in the boonies,  I know my neighbors; I know where they work and I know their childrens names.  In most cases I have known them since they were born or all my life.  The closest thing to a terrorist in this neck of the woods would be a skunk.

No one should be able to make you afraid in your own home.  I was uneasy for a long time.   I don’t like crowds.  If I am in a larger building I mentally inventory all the exits and where they are…a Movie Theater is probably one of the scariest places for me.  ( Can I make it to the exit before I am trampled by these young kids who can move faster than me?)

Fifteen years later…do I feel safer?  Yes.  If I were a world traveler I probably wouldn’t feel safe, but as a hermit living a quiet life in the boonies…yes I do feel safer.  But I will never forget the feelings on that day fifteen years ago. 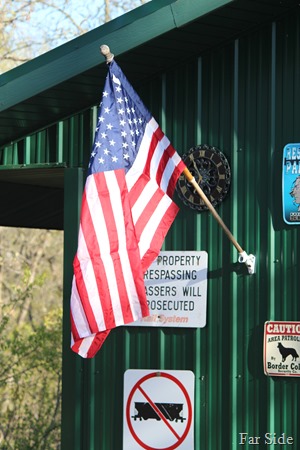 Do you stand if you are able when the first flag passes you in a parade?  Do you stand for the National Anthem?   Lately it seems that some people don’t want to give our flag the honor it deserves.  If you were born in the USA, or are a legal citizen stand up for our flag or leave.  That’s all I am saying about that.