In 1968 my not yet Father In Law called my Mother and asked if he could employ me for the summer; $40 a week, room and board.  So Far Guy met me at my Uncle Otto and Aunt Marie’s house in Clarissa Minnesota.  The first spot I was out that year was Paynesville Minnesota.  On the way over Far Guy told me that someone named Bill would say “She is prettier than the gal you were with last night.”  And sure enough that is what happened. 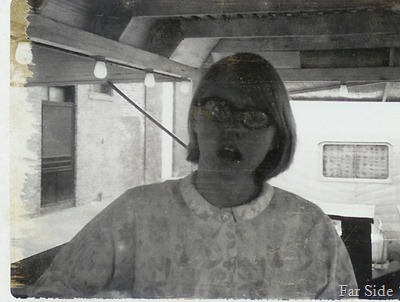 That is me in the little joint.

The sixteen year old gal raised on a farm was about to get a whole new education.  I would meet many new people and learn how to work the diggers.   Far Guy’s Dad was a good teacher, I worked with him almost exclusively.  At that time there were two sets of diggers the big joint and the little joint.  The little joint belonged to Far Guys Mom because she bought it from her brother with money she had saved from teaching school.  So there you have it Far Guy worked with his Mom and I worked with his Dad, there were twelve diggers in the little joint and sixteen in the big joint.  I was warned that if I didn’t move fast enough I  might get an elbow in the ribs…(I was warned by Far Guy and his sister)…apparently they were slow movers.

A carpenters nail apron was tied around my waist.  Quarters were in one pocket and dimes in the other.  I would make change for a dollar…two quarters and four dimes and throw the dollar bill in the metal money box on the floor.   Nickels were kept on the back of each machine so you sould make change for a quarter.  I learned to replace prizes after they were won and what each price could be redeemed for…a rabbits foot was a free game, as were coin purses, a knife and a churchkey were 30 cents and a free game, table top cigarette lighters were 50 cents and a game.  They were all paid with dimes.  There were also two tokens they were bright orange one was 50 cents in trade and the other one dollar in trade. 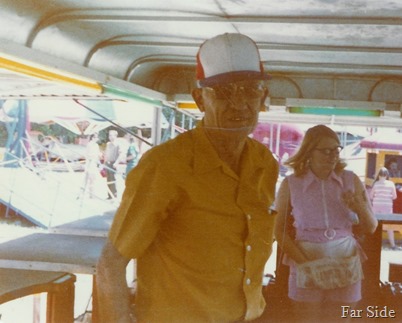 Far Guy’s Dad and I would stand back to back in the diggers, I would watch my eight machines and he would watch his.  We would start work at noon or 1 PM at the latest and work until at least midnight. It was a good twelve hour day. We worked hard.  My feet hurt. It was hot, it was cold…but I stuck with it.  Far Guy’s Dad was a good story teller and would tell me stories and I should have written them all down back then. I think he told me stories that no one had heard before. 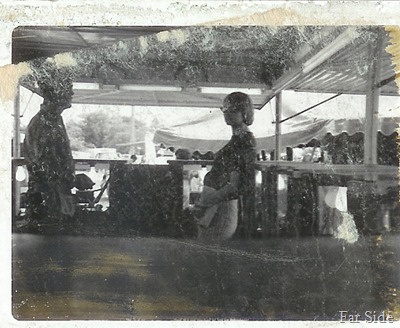 A rare photo of Far Guy and I working together in the big joint in 1968.

I was sad to head home after the summer, Far Guy was off to College and I was in my senior year of high school.  I got quite an education that summer, I learned a lot about people, and made some life long friends.

I stayed in the camper with Far Guy and his parents.  I had the bed way in back of the camper.  It was a cozy situation but we all made it work.

My baby brother asked me the other day “How did you get Mom and Dad to agree to you going out on the carnival when you were still in High School?”   I am not sure what Far Guy’s Dad told my Mother…what ever it was…I was happy…Far Guy was happy…we had a great summer.