Midway Memories: More on the Diggers

The diggers required some maintainence.   Sometimes one would go all funky and drag the shovel back dragging along the prizes. Sometimes a chain would break.  We had an out of order sign but it was rarely used. There was also one extra machine ( cab and mechanism) that was kept under the counter just in case.  My Father In Law and Far Guy were the fixers of the machines.  When you are making money ten cents at a time you wanted all of the machines to work.  Especially if you had a “tip.”  A tip is when all your machines are being played at once.  Being that busy for an extended period of time was a good thing. It was fun being busy!  People would tap their dime or quarter on the top of the machine, you would grab the dime or make change and turn the machine on.  There was a lever that turned the machine on.  You could usually hear it click and then it was ready to play.  Prizes were scooped up and then brought back to the chute, sometimes they would get hung up and need assistance…the glass tabletop lighters we tried to catch them before they were dropped into the chute.  No sense in breaking a lighter and cleaning up a mess.

During slow times we would get out of the trailer and play the machines ourselves…I got pretty good at it! 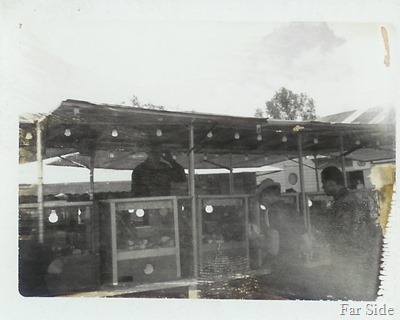 This photo shows how the machines were set up in the trailers.  In the photo above you can see the aluminum trim on the diggers.  Dads main intent was to cover the hole in front where the coin slot was.  Connie usually worked with Dad in the big joint.  Mom and I usually worked the little joint.  There was a reason for that!  Dad and I talked to the customers all the time, we kept things interesting, joked with the people and would call attention to players when they scooped up a prize.  It didn’t make much sense to put two talkers in one joint.  When Connie and I worked together I didn’t pay as much attention to the customers.

Far Side writes:  During the winter at the house in Park Rapids, all the digger mechanisms would come into the basement and get cleaned with  kerosene.  Fairgrounds are dusty places.  One by one they were inspected.  The work bench in the basement was busy during the winter.  In later years, a machine was purchased at a Antique Shop in Duluth Minnesota. I believe it was $250.  (We heard one was there and went to look at it several times before his Dad bought it.)  It was that machine that remained in the basement until they sold their home.  (Far Guy’s Mom did not want a digger in her living room.) We have had it in our living room  since about 1990 it was a gift for Far Guy’s birthday…and then it was upstairs in this house and now that machine belongs to our daughter Jennifer, she has it in her dining room.  Far Guy fixes it on occassion and has showed them how to adjust it.  It was that machine that Jennifer played when she was little.  I will share part of a poem she wrote:

You could get prizes out but they had to be returned to the machine!  That was always the rule, you could play for free but what you won went back in the machine.   A hard rule for some kids to follow, we have had to replace a few rabbits feet over the years. 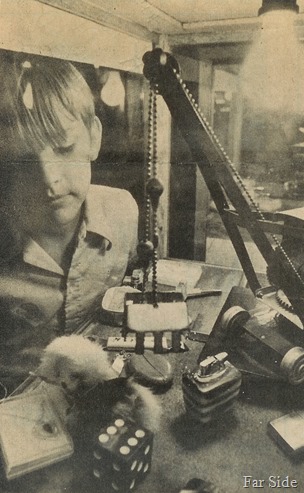 This is an old newspaper photo from Algona Iowa.  It shows how the prizes were laid out in the machines.   See that light bulb?  That was one thing you had to watch out for when replacing prizes!