After finishing up the Christmas Ornaments I was faced with the dilema …what to carve next?  During our weekly carving get togethers one of the gals was carving a daisy.  I asked her if she would like to teach a few of us the technique…she said “Sure.”  She is a very talented woodcarver…she graduated from high school with Far Guy.

She took the time to make study pieces….step by step carvings that help you to carve a piece along with very detailed instructions. Far Guy cut out a few round pieces of basswood.  Bit by bit we learned how. In my case it is a good thing that no two daisies are alike!  I struggle with transposing the position of the petal on top and what parts are over or under to the bottom of the petal…it must be a right brain left brain thing so I usually end up guessing! 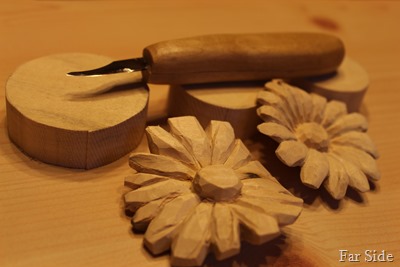 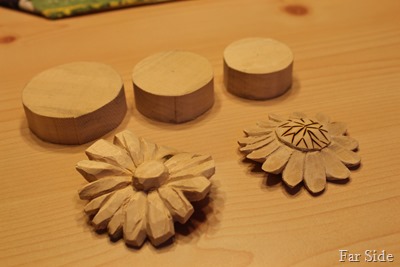 I woodburned a design on the underside of the daisy…a stem will be attached…and these five will someday be a bouquet.  SOMEDAY. 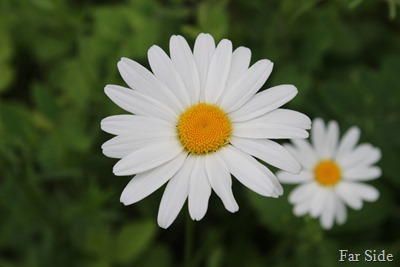 I would like to carve one more project before Christmas ( a gift) and I would like to do the  prototype of next years ornament before we are forced to carve inside because it will get cold on the patio!

My carving skills are improving.  I began carving in the winter of 2004 at my Uncle Otto and Aunt Marie’s dining room table.  Uncle Otto took Far Guy, Cousin Kathy and I under his wing and taught us the basics.  Uncle Otto died on September 13 2004 his 68th birthday. After he died we didn’t carve for a long time…but eventually we all began to carve again.  I think he would be pleased with how far his students have come.