Many of the people that were out on the Carnival were family.  One of those families belonged to Roy and Willie Earl or maybe her name was Willa Mae. They were from Edinburg Mississippi. Roy had a Cat Rack. They had thirteen kids.  #1 Beau was the oldest whose real name might be Roy Earl according to school records. #2 Sofrona or Sofronia in school records, she ran off with a ride boy who eventually had a few rides. 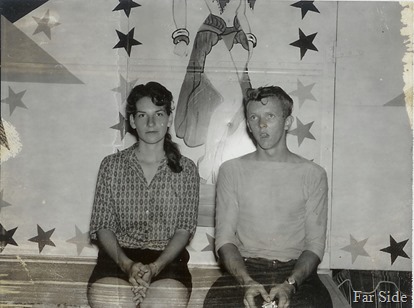 Sofrona and Pat …as far as I know he was just a friend.
#3  Nonna or Nonia #4 Loretta at the age of thirteen she married Kelsey from Ogden Iowa who was electrocuted on some other show, Loretta died in a boating accident. #5 Jo  #6 Robert or Bobby who was Far Guys friend, Bobby was eventually a Flattie.  (A Flattie  works a Flat joint where you control the win….not the loss but the win.) When Bobby got married they were married on the Ferris Wheel.

In this old newspaper clipping Bobby is running the coaster.  The diggers are circled, this newspaper clipping is probably from the early 1960’s
.
#7 Wayne born in 1950 and died August 26, 1968 of asphyxiation in a motel. #8 Danny #9 Steven #10 Morris #11 Buster not sure if Buster had a real name. # 12 June #13 The baby whose name was most likely Frankie.

Far Guy used to make the rounds with Bobby, they would try to sneak a peak under the canvas of the girl show, sometimes they got an eyeful before they were run off.  They would sneak into the grandstand without paying…

The kids that were old enough all had jobs, they were ride help, worked in joints or were ticket sellers.

Far Guy says that he introduced me to Bobby once…but for the life of me I cannot remember the meeting. We met one of Danny's sons one year he was working for Freddie Grover.

Through the years I heard  about this family that lived in a truck, almost nightly beatings with a belt occurred as the old man beat his wife and kids.  I heard this from a number of different people so I believe it is true.    Back then I guess everybody minded their own business.