Fall is in the air, it was Homecoming last Friday Night.

Homecoming was a big deal in the late 1960’s.   Everyone and their uncle came back to town for the big football game and the dance.

The Homecoming Royalty was picked by popular vote weeks before.  Everyone just voted for who they wanted..very democratic. The Sophomores and Juniors chose one beautiful girl to represent their class.  The three Senior Gals with the highest amount of votes all went shopping for a great dress.

There was a flurry of activity making millions of tissue paper flowers for the class float and the excitement of the bonfire that was held in the school parking lot the night before the big game.  On Friday morning..the entire school would vote for the Homecoming Queen. The results were kept secret until the coronation in the afternoon.

One of the most popular girls who was in the right “click”.

One of the sweetest gals you could ever hope to meet, who was quiet and shy. 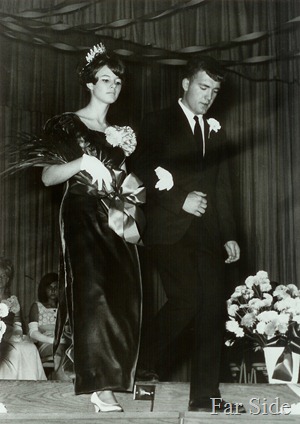 The dress was navy blue velvet, the sweetest gal in the senior class won, and she was escorted by Far Guy.

He often tells the “grand's” that this was the time he was the king, because he escorted the queen. 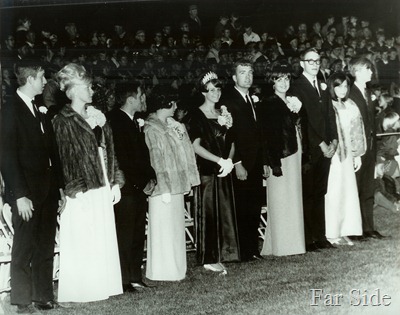 Oh boy PETA would have a hey day now a days.  I believe the fur coats/stoles were borrowed from a few ladies in the community.  Back then many people wore fur coats.  It was cold out there on the football field that night.

I was in-between boyfriends..so I went to the dance with a bunch of my girl friends.  Far Guy had a date..I am not sure which of his many girlfriends was his date that night.

The Junior class float won the prize for the best float in the parade..making a million flowers out of Kleenex must have looked impressive to someone.  I was a Junior that year, and Far Guy was a Senior:)

What great memories. And you did have an inkling that Far Guy would be your King?

What a nice pleasant nostalgic post, and to think you married the prince.

Really nice photos and lots of fun reading about the Homecoming activities in the 60's.

Love the hairstyles and fur coats, especially. Far Guy looks very handsome as King!
I was being pitiful the other day and told Mr. Maple that I never attended high school Homecoming. He, of couse, told me he had 87 girlfriends back in those days! ha

Such memories. I didn't go to Homecoming, since I was an Air Force brat and never got involved with the other juniors and seniors at the school I only attended a year. Then I graduated and we moved away again!

I now see what I missed, not living in the same place for very long.

Wonderful memories indeed. You are Far Guys Queen and he your King. A wonderful happy ending . Great photos my mum wore those fur coats and coverups. Have a good day !

How I remember stuffing paper napkins in chicken-wire for the class float only see it become a soggy mess during the rain-soaked parade.

Love the gowns and the furs in the photo. Now, the girls here wear slacks.

She wore blue velvet....ahhh those were the days!

I was with the queen so that makes me the KING!

What a sweet memory!

Oh those were the days my friend. Yep, I can remember we always borrowed those 'real' fur coats for such royal occasions.

Love the pictures and how they took me back!

Have a magnificently blessed day sweetie!!!

LOL here! I remember the hours spent making those flowers with Kleenex and bobby pins. The only things you omitted were the convertibles that drove the court out onto the field for crowning.

Wonder how those Northface fleeces look with the gowns these days?! PETA be darned, I'd still go for the fur!

I loved us back then. Everything about it. Just wish my husband and I had dated in high school. Knew each other but didn't date until out of school.