We finally got a little rain to help settle the dust for a day or two.  The rain was wonderful..it smelled so good.  It didn’t rain nearly long enough to do any good..but it was better than nothing.

I saw these thunderheads forming and talked Far Guy into going for a quick ride and abandoning the supper dishes for a few minutes. 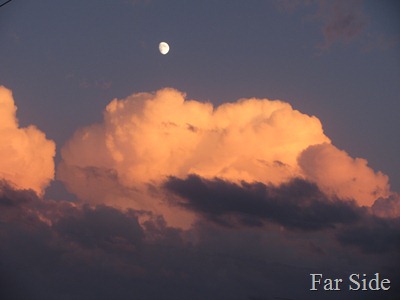 The moon was out. The sun had set but the high clouds were still picking up some color. 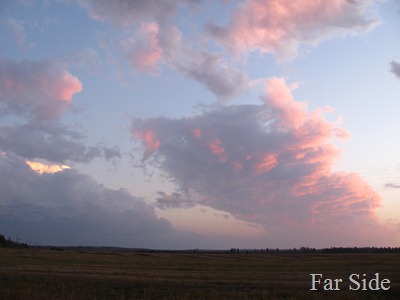 These were some of the best clouds I have seen in awhile.

All day long the wind howled like a banshee and the dirt flew..as did my plastic lawn chairs..and Chance’s pool.  It moved..that did him in.  He wanted in and I was supposed to protect him from the wind… he sat on my feet and drooled.  He hates the wind…actually I think it is the wind in the trees that he hates, wind over at Odda’s is just fine.  Crazy dog.

There was a fire in our area that could have been bad, luckily enough people were around to get it under control.  Thank you firemen and Department of Natural Resources.

I spent the afternoon under a cloud of my own. One I didn’t make but one I wound up responsible for.

Two former Director’s of the Museum each started web sites.  They were lousy at leaving user names and passwords. ( Worse than lousy..they sucked at it)  I have been trying to unravel this “mess” all summer.  I have two volunteers helping me.  Finally one of the Genealogy gals ( from Tennessee) thought she could help.   Together we updated one of the web sites!! Hallelujah!  It ain’t perfect..but close.

The cloud came on the other site that was just cracked by volunteer Mark this morning.  He sent me the info so I could FINALLY access the emails that had been sitting in that site for almost a year.  I wrote apologies to people requesting information.  I printed out copies and will find volunteer researchers for all the queries.  Mark updated the info at that site and changed the email to our active email account.  I felt badly for the people that thought they were actually leaving messages for someone.  There were three people that wanted to apply for the Directors Position ( they sounded pretty good to me) and even one volunteer that wanted to do research.   It didn’t take me long to forward him a project.  As I printed the last query..the cloud lifted a little.

I get real tired of fixing other peoples messes. Okay think positive.. at least this mess could be fixed from my comfortable computer chair at home while Chance drooled at my feet:)