When Far Guy was younger he had a go cart. Fifty years ago… 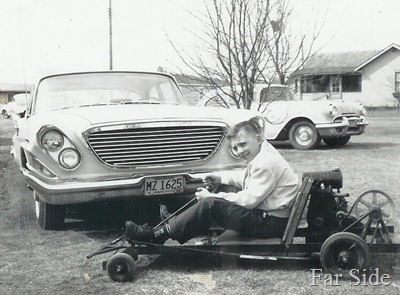 This photo was taken in the yard at his home in Park Rapids. I am sure that next door neighbor Emil was thrilled with all the go cart activity in the neighborhood alley.  Emil was a bit of a grump.

The Grand boys got a go cart.  I am not sure..but I think their Dad who is just a grown up boy may have had something to do with this. 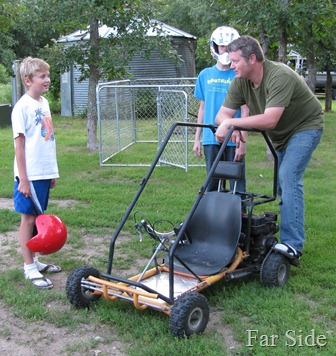 They didn’t have a safe place to ride at their house.  So they brought it here..along with the helmets I requested. 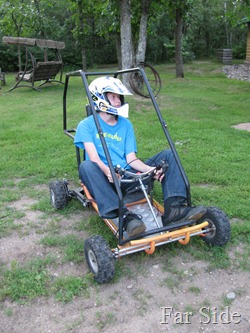 We still need to attach a flag to it so that it can be seen better. Adam needs to practice looking both ways when he goes out of the driveway ( just one of the many rules).  Noah followed all the rules (as far as I could tell) and he would often follow his little brother around on the three wheeler.  I am not sure if this was out of concern for his brother..or if he just likes driving the three wheeler:)

Big boys do like to make purchases for others that they can enjoy too. ;-)

The more things change... the more they stay the same. Nothing is more true than boys will be boys, and the boy in all men is evident here.

Awesome can I come over and play with the go cart?. I was and are still the Tom boy lol always did guy stuff like this. Wonderful photos WOW Far guy hasent changed all that much from the first photo to the recent one maybe just a bit greyer but heck who isnt now a days lol Have a wonderful day !

and (so far) a good time was had by all...except Granny who was worried the whole time...

Boy, did this bring back memories. My brother had a go cart similiar to Ed's. That must have been a 60's thing. I'm sure he had just as much fun with the new one.

Cool picture of the go cart of so long ago. I notice the new go cart has the safety bar on top. Good for you to insist on the safety rules.

my brothers built "go-carts" but we didn't have engines. Just bits and pieces of wood, axles, and wheels. Then we pushed them up to the edge of the long hill - and away they flew. All the kids in the neighborhood came up to our hill.

What great pictures! Larry had a go-cart when we were young and we all had so much fun. Great memories in the making for you guys!

Country Gal, That would be our Son In Law Andy in the go cart photo with his boys..Far Guy has no hair:)

Why don't you post the photo Floyd has of the go cart?

We have a really junky one but the son just loves it! He goes like a bat out of ___ll! I would love to get a two seater or a really good one because I have to say I love playing on them too!

Cool headlights on the car!

The grown boys here (when they were little boys) also had a go cart - have to see if I can find a picture.... Looks like fun!

Just tickled to see an old fashioned Go-Kart.
My son has his own Go-Kart Engine Shop. He builds Custom Go-Kart engines and re-builds Kart engines that need repaired usually after each race. This is a really competitive Racing Sport Organization.
TODAY these Karts speed around the dirt and paved tracks at 60+ MPH.
There are many levels of age groups. And even my husband who was born with "Racing in his blood!"... likes to enter some races in the, ahh shall we say the
ANTIQUE Age group! LOL

That looks fun - and there doesn't seem to be that many changes to the style from the one 50 years ago!

Now that is a cool go cart! My anklebiters would love it!

Are you back safe and sound from Canada now?

Terry had a go cart when he was a Jr. in High School, he also had a horrible wreck that damaged his lip. They cut and stitched and remade his mouth for his Sr. pictures. Helmets were unheard of way back then.

I love three wheelers! Luckily, when I disobeyed Dirt, ramped up the throttle, took the swales in the dunes like they were nothing until a swale turned into a cliff and I sailed into the air, then landed upside down, nothing was hurt for long, just temporary shoulder and pride pain. I'm equally dangerous on water harleys and four wheelers, and nearly so on tractors, if I don't have work to do. I guess I'm like a Border Collie, dangerous without a job. So I can totally understand why you request the helmets and the rules.