When we ( Far Guy ) was done with Active Duty and we moved back to Minnesota from Florida we lived in an apartment for awhile. Trica called it the brick sidewall.  A name she made up..it had bricks…she was three. I was pregnant with Jennifer.   Apartment living drove us all nuts, I did not want to bring a new baby home to that apartment, where we had to walk the dog on a leash and goodness knows who was roaming the halls at night.  We could not afford a house so we settled into a brand new mobile home in Regal Estates for a few years..six to be exact ( 1975 to 1981).

Thirty years ago we bought our first house in Moorhead Minnesota. 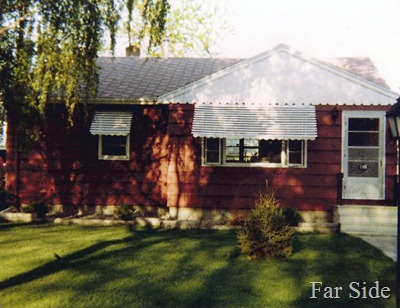 In the summer of 1981 the interest rate was 18 1/2 percent. We were in a recession. ( Lets all say Uffda together!)  The house had been a foreclosure. We paid almost as much in interest as we did payments.  The house cost $24,900.00  it had two bedrooms, one bath, kitchen, and a living room dining room combined.  It was about 900 square feet.  It did have a basement and a huge fenced backyard with a garden spot.  It was less than one block from the city park, and a block and a half from the neighborhood school. It was perfect..except for the payment..and the fact that we had very little furniture.  I was working nights, Far Guy worked days.  We saw each other either at 1:30AM when I got home from work..or at 6AM when he got up to go to work and Sundays. We didn’t need daycare for the girls..they were six and nine.  I slept after I got them off to school. 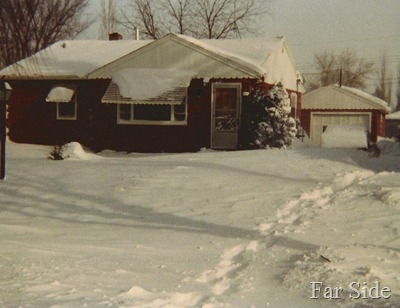 We bought furniture and redecorated every room in the house. We re-shingled the garage and built a deck in the backyard…where I hung my collection of wind chimes. It was home for seven years, until we moved to the lake.

Back in early October we were in North Moorhead and I was driving..and I had my camera..imagine that. 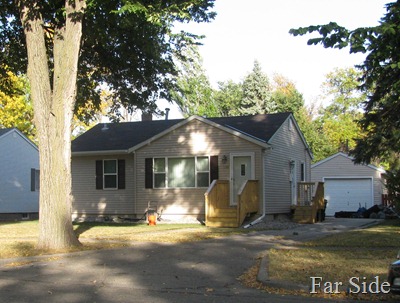 It is still a well kept house..I wonder what it looked like inside? Was the kitchen still country blue and off white with a rust colored linoleum floor?  Was the basement still knotty pine?  Far Guy said “Yup the chimney is still crooked.”

We drove by the school.. 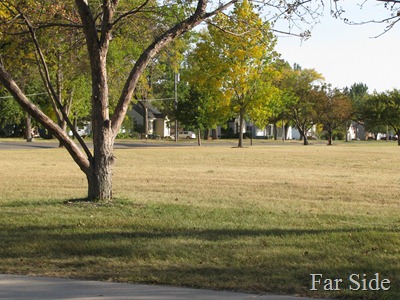 This is the corner where the neighborhood school used to be..sadly it is no longer there.  I can still see the double doors that welcomed my children inside..and the playground with the swings with the “soft rocks”.  I could almost hear the children and their friends laughing and talking:)

How nice to see that the house is still taken care of. Sad that the school is gone, but so many are, and kids moved to other bigger schools. I've often wondered what the inside of my childhood house is like too. Have a great day, I hear rain outside!

900 square feet sure doesn't seem very large for such a big family, but I'm sure you made it work. I love those pictures, they made me wistful for the past, too.

It's nice to know that someone found your little homestead as charmin' as ya'll did and took care of her.

Sometimes it truly tugs at the old heartstrings when ya go back!

I enjoyed the trek through your early family years.

God bless and have a wonderful day sweetie!!! :o)

Yeah, I remember the 80's and almost losing everything my ancestors had worked to have here because of 18 to 22% interest. Wonder why we all didn't go to Wall Street and walk around with sings telling everyone how mistreated we were? Maybe because we were too busy working at what ever we could get to pay the bills?

It is interesting that today this house would be considered small for a family, yet it was a common size for the time and some very happy families came from such homes. I think today's large houses allow families to drift apart and "do their own thing" or be isolated too much.

Nice to see that the house is still being taken care of. I went back years ago to our old hobby farm and was heart broken it looked aweful sure they may have changed the look of the bungalo but the property and barns were in terrible shape to point of falling down and it was all over grown thankfully there were no animals I would dred to see how they were looked after, so I go back every now and then and look at the photos I have of what it was like when we lived there and that makes me feel better. Have a wonderful day !

But you had a nice big two car garage! You did a nice job with that first house despite its drawbacks.

That was interesting:) So nice that someone is still caring for your house.
We also bought our first house in 1981, and interest rates here were the same. We got a deal, the previous owner carried the mortgage for 16%:)
Ours was on 4 acres, and house prices were high then anyway. Ours cost $149, 000:( Surprisingly, it looked very similar to yours, but no basement. We were on a flood plain. We were surrounded by water three times in the 5 years we lived there.
Sold it for $89,000. Yeah:( But bought right away, so were able to get a bigger place on 10 acres for less than we paid for the 4 acres.
We drive past it occasionally, but it is has been neglected and is not the cute place we used to live in any more.

I'm glad the little house is still loved. But your place in the woods you have now is much nicer! :)

Good and bad memories. It is nice to have the photos. Yes schools disappear quickly even when they really don't need to go. They do recycle a few in our area but most are torn down.

The house looks cute as can be. I bet it has great stories to tell!
We were able to get our first house just before interest rates skyrocketed. I still remember that our mortgage payment was $287.80. We thought it was a lot, in the beginning! Now what most folks wouldn't give to have that sort of payment!!

Sounds like us, we started in an apartment (hated it) then we ended up in a trailer also, but it was out in the country and so much better than in town. We bought our first home in Illinois before the first child was born and it was in town (yuck) and now of course we own our second home and we are out in the country and loving that also!! Now if I can talk the hubby into building me my log home in a few years on our property that will be even better ;)

It's good to know your home has been loved. We've sold 2 in an area near each other so I do keep track of them. The one I built as a single mom has been through a lot of hands, and mostly taken care of. The last one we sold has been sadly neglected. It's a sad thing to see.

It had the best peonies. :)

Wistfully enough I got tears in my eyes. Chance is constant, sometimes not good, sometimes better. Memories are the best.

I enjoyed this post so much. Nice to know that someone else takes pride in your former home. It is cute as can be.
My brother recently rode by one of my parents' old houses and all the magnolia trees, rock flower beds and the flowers have all been demolished. Makes me sad!

Last year Peter and I were on Long Island. He drove past the house where he grew up and stopped the car to point out where the forsythia had been, etc. The lady who owned it came out and asked what we were doing, and ended up inviting us in for a tour. It meant a lot to Peter to see the inside of the place. It's been changed, but he could still say, "My bed was right here," and it touched him. (The house was about the same size as yours; they had 6 children.)