This is what we went to Winnipeg for..the Train Show.  You see we are addicted..and should go into treatment. 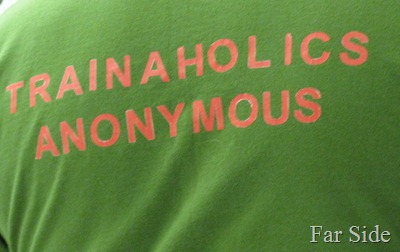 I am not as addicted to the trains..as I am the road trips to the train shows that may or may not go right by an antique shop. 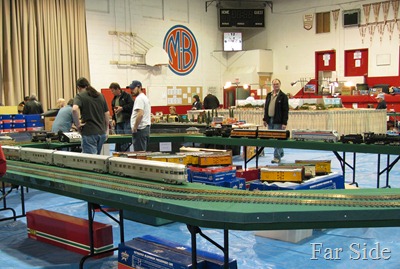 In Canada there were some really large scale trains.  We did manage to find a couple of O Scale Lionel cars. There were booths on two levels, which gave lots of space for layouts. 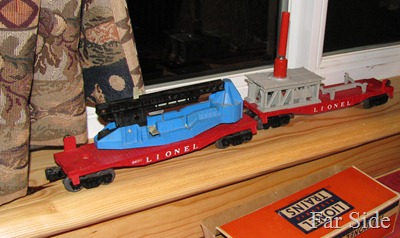 These are both some kind of cars that shoot missiles. I am not sure what they are doing in my windowsill. Resting perhaps. That is my Lionel box…I bought something for Far Guy the next day at the Train Show in Fargo, North Dakota. 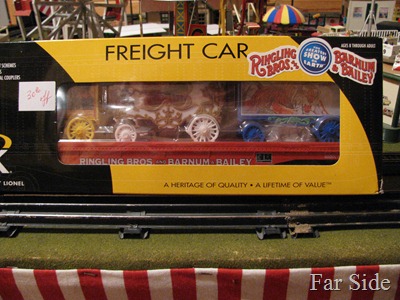 Here is another purchase from the Winnipeg Train Show.   Far Guy has not taken it out of the box yet..so I didn’t either.

We got up early had breakfast and were at the train show just as it opened. I noticed a few people still say “A”  after every sentence.  Our waitress said “for sure” many times.  By the time we left town, I almost knew my way around town.

Onto the next Train Show in Fargo North Dakota. 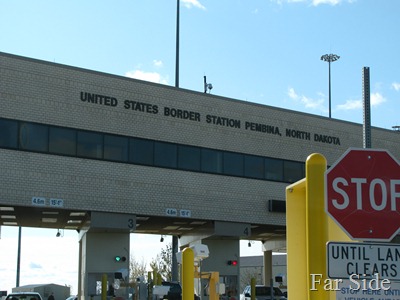 This is the checkpoint at the border.  The lady that checked us through was really sweet.  She asked where we were from and what we did in Canada.  She ran our passports through some kind of machine…and we were told to wait.  So we did, then she handed back our passports and told us to have a good day:)

Cool. Here in a little town just 15 min from us called ST Thomas there is a train museum you guys would love it!It has all kinds of life size old trains and the model ones. Great post and photos. Have a wonderful day !

Every time you write about trains, I think of my son who is fascinated by all aspects of model railroading. He has his huge layout in storage at the moment. He made all the special crates for it. He and his wife are looking for a house. I know a place to set that layout up in is on the list of requirements.

What a great trip. Thanks for sharing it with us. :)

I have never seen a train setup like Far Guy has, and I might be addicted too, if I did. I'm kind of an addictive personality type myself. I love that shirt! :-)

what fun! when i was growing up we had a "train table" in the basement. it was very tall, so that my dad could lean over it without crouching, and he and my brothers had built an elaborate series of tunnels and loops and tracks. every now and then theyd put the train on the track and make it go. it had lights that flashed and the crossings had lights and the whole thing, now that I think about it, was quite amazing, especially from my intellectual professor father.

thank you for reminding me of that!

That T shirt is hilarious!

I love model trains too...and if we ever get through sorting our garage, I would like to set up a track!

It's always nice to pass unscathed through the border. I love the t-shirt.

I think I'd love that circus train. So you were in Fargo, eh? LOL!
I love that FarGuy collects trains. :):)

Fun, fun, fun! Far Guy got to get there and see and watch and WONDERFUL!

It sounds like it was a fun and relaxing trip. So glad you all had a good time.

So happy you both had this opportunity!