Far Guys Mother had an Uncle named William Cripps.  They called him Uncle Will. 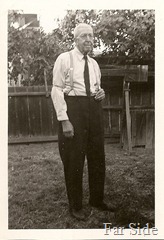 He looks very much like Far Guys Maternal Grandfather..so we will put him in that part of the family.  Until someone corrects me. Yes, he was a brother to Martha Cripps Abbott who married William Abbott.
He apparently liked dogs. 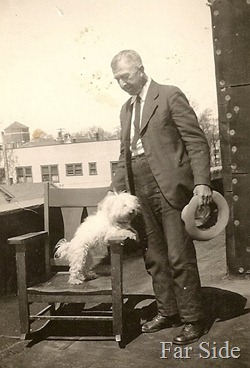 This little dog liked him very much..and his chair too.
I think he was from Canada, that is what Far Guys Mother always said. 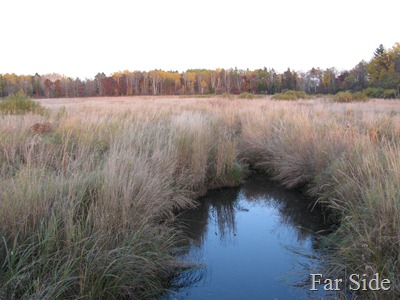 This is Cripps's Creek.  Either Uncle Will or parts of his family lived near this creek long enough to get it named after them.  I am not sure what other people call this creek..but we call it Cripps’s Creek.
We stopped there the other evening so I could take a photo.  The creek is low and barely flowing and the rushes are very tall. 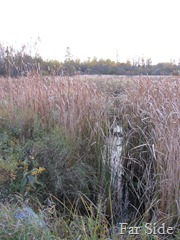 This is the west side of the creek.  I wonder where the homestead was?  It is not a farming area..they must have some connection with logging.
When I was in Confirmation Class on Saturday mornings for hours,  we were often entertained with the Pastors “Miracles”.  One day he was driving along this road very fast and the culvert was washed out and the water was rushing over the road.  He prayed..and the Angels or maybe even God helped his car fly over the creek and landed it safely on the other side.…that is what he told us.  I always smile when I drive down this road..especially when I cross Cripps’s Creek:)

Nice piece of history a good story in it. Lovely old photos. Have a wonderful day !

You always have so much history of your family, Connie, I am amazed that you have such a stash of pictures, too. It sure doesn't look like much of creek today, does it?

Oh glory girl, I had to take a second look here. That first picture soooo looked like my Pappy Walden at a glance.

Love the story about flyin' over the creek. I have such a story that involves the oncomin' head on that I was ready to meet my maker.

I really like the story and to have a creek that really has the name. The rocking chair reminded me of one just like that which has been in my basement for years waiting for a restoration. Uncle Will seems like a gentle guy.

We also had an Uncle Will...my grandmother's uncle...he fought in the Civil War and I believe his uniform was donated to the Brown County Indiana museum...

Fun! I love seeing the creek today and wonder, as you do, about where the house was and what the creek may have looked like back then!

I love the gentlemanly look of these men in their white shirts and suits. They look so dignified.

I think that was asking a lot of those angels, but they were up to it.

What a great story about the flying car!

Very good history my friend, and be blessed, lots of hugs too.

Great story about uncle will.
Are the plants along the creek the terrible canary grass? Our waterways are choked with this invasive species.

Lovely story, thanks for sharing. I think the dog liked him better than he liked the dog ;)

ahh lots to smile for eh?!


so I've gone to begging Dirt for a trip to Minnesota. His new mantra is... when we retire.. I wanna ask for steel radials...