Two and a half strikes

Far Guy and I had a little trip planned..just a few days away.

Strike One: My Dad was hospitalized last Wednesday with a bowel obstruction, he has had that problem before and it usually resolves all by itself after he gets that terrible NG tube and proper hydration in a hospital setting.  We waited until we were certain that he was going to be okay.  And he is..however he is a tad cranky from not eating since last Tuesday. He will get out of the hospital today..I hope.

Strike Two: Late on Wednesday night..Far Guy let Chance out the front door.  We accompany Chance outdoors at night..well in two seconds Far Guy was back saying Chance had been skunked.  I could tell by the smell..uffda. I mixed up the liquid soap, peroxide and baking soda mixture.  Far Guy used latex gloves to put the mixture on Chance.  Little by little it worked it’s magic.  We rinsed him off really good and allowed him in the house. The next day he was properly deodorized at the groomers.  You can still smell a bit of skunky smell on his muzzle.

Strike Two and one half: I forgot the Passports at home..but we were only ten miles away…so we turned around and went back and got them.  Far Guy said “ Do you really think we are meant to go on this trip? “  I said “Yes, we are going..it is only two and one half strikes.”

We dropped Chance off to visit Miney and Little Elvis.  Jen and her family declared Chance  “barely skunky”..although the other dogs really checked out his new smell. This was the first time we have left him with anyone overnight..he did fine and so did we..although we think he is a little miffed at us. 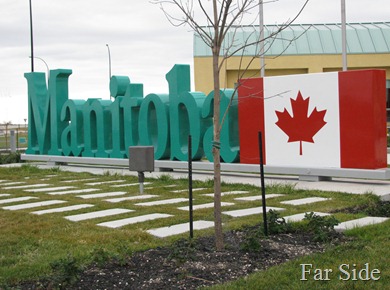 The gals inside knew right where we were going:) 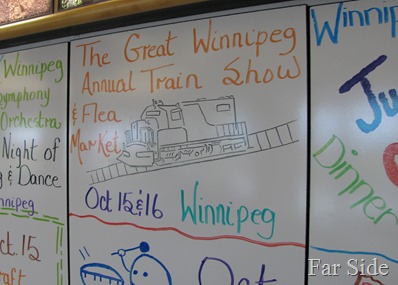 Have a wonderful time!

Oh those darn skunks!!! Have a great mini vacation and enjoy the train show.

Glad your dad is okay. Chance must have surprised the skunk. Did the house smell of skunk too?
An overnight getaway. Cool.

Well, of course you were going to a train show! And obviously you were meant to go. Glad to hear your dad is all right.

Miney and Lil Elvis probably thought he was wearing a new cologne.

Have a wonderful time--wish I were there.

Sounds like a great show, Papa would love it. Glad your dad is doing better I suffer fron mild to sevear IBS it aint no picnic and thats why I cant travel to often . Miggy hasnt ran into a skunk yet but her time will come I am sure of it as there are few around here lol. Cant wait to see photos from the train show.Have a wonderful time.

How fun! I'm glad you made it!

Have a great time and a safe trip! :)

In the middle of the night I worry a lot about Barney when I can even smell a wiff of skunk out there. We are fenced in but not skunk tight. I will write down your recipe and hope we never have to use it. They are being hit along the roads in very many areas right now. Enjoy the trains!!!!

Have fun and good job on persevering through the obstacles.

I haven't been skunked and all I can do is imagine and know that it ain't pretty. I have smelled where one had been and it is nasty. Hope you all have a nice trip. Chance will get over it quickly. He's with his friends so he should be happy. Hope dad is ok now.

OH! Wonderful! A little trip is always delightful and restful and makes one come back so ....peaceful!

Hey, Chance! I understand that skunk thing also! Mom tried it all, but the groomer really did the wonders.

It was pretty cool wasn't it? Well, anyway I thought so until that green stinging stuff hit my eyes!

Glad your dad is better. And your dog isn't skunky smelling. It sounds like a fun little trip. Can't wait to hear about it!

Why you're right next door practically - well one province and at least an eighteen hour journey. Enjoy your travels.

Sorry about your dad, but glad to hear he is ok. Skunked....so glad we have never had to deal with that.

Have a wonderful time at the train show!

Wow,have fun at the train show and the flea markets.

So sorry for your dad--and Chance

I can see how you would be wondering about that trip. After all the years of crossing Canadian border with just a driver's license and a birth certificate ( in from Michigan) isn't it weird to be using a passport now? We used to go to Toronto quite often.

Glad Dad is better too. I grew up with a dog that was always getting skunked. I can smell them a mile away now.

Hope Chance is smelling good now - and the dad is feeling all better too.

The train show sounds fun! I"m glad you were able to de-skunk Chance. That has got to be the worst.

Glad your dad will be okay!

Wow.....a train show AND Canada! Glad to hear you didn't have to call an out on this trip;)

Sorry to hear about your dad. Glad he's better.
Baily was skunked this spring. Sure glad she could sleep outside until the smell went away.
Glad your having a mini vacation after your summer of work.
Far Guy may have to build more shelves after this trip???
Hope you find some shops too.

Nothing worse than skunk that is for sure. Mini vacations are always nice! I want to thank you for all your encouragement, it has really helped me to keep going and overcomeing some of the hard times. It is finally getting easier being back into the school scene and I am actually looking forward to scheduling for classes. It starts next week.

Yah you made it, and you were that much closer to where I live, LOL.

So what a adventure, and you barely even got out the door.

You did overcome! Funny how all that stuff can happen just before we go away. A friend had his house broken it to the day before he was going to the coast.

I bet your husband is in heaven at that train show. So glad you persevered and could take the trip. I know we will be seeing some good pictures from it.
On the skunk deodorizing - - any particular ratio for those items? I never knew there was anything other than tomato juice to use. Chance probably was a bit miffed - - first the skunk, then the solution, then the groomer - - he probably had fun at his sleepover though.

I've been reading about a few dog and skunk encounters lately. Must be the season. Hope you have a good trip!

Glad your dad is doing OK... and poor Chance - getting skunked!

Hope you had a great time at the train show and flea market!

Sounds like Chance has been 'skunked' before...at least you know what to do...

Looking forward to hearing about your trip...

a white board? coooool!

makes me antsy to go on a trip.
We have a big wedding coming up this weekend. OUr youngest daughter taking the plunge after 8 plus years!