Chance still smells a little like skunk..even though he has endured many baths.  If he gets wet in the morning dew..the odor is accentuated.   Good thing we love him as much as we do!

Take it from me..skunk smell is the worst.  I wish I had known about the “Magic Stuff” back in the late 1980’s when a skunk walked right up to the fence where the Shelties were and sprayed Misty.

Rule One: Never let a dog that has been skunked into the house.  The oil will drip all over…and smell for weeks.

Rule Two:  Use rubber gloves..I did not use them with Misty..I picked her up..bad move.  I smelled like skunk until my finger nails grew out.

I washed her with everything possible..tomato juice..lemon juice..nothing  helped.  She smelled like skunk every time she got wet.  She eventually went blind..there is much controversy about skunk yuck blinding dogs.  The old timers will tell you that it happens often..the young Vets will tell you it is an old wives tale.

This is the first time that Chance has encountered a skunk.  Far Guy thinks the skunk was under the bird feeders…and Chance knew something was in the yard..and when Far Guy opened the door Chance ran out and the chase was on..for about 10 seconds.

Chance came right back to the door.  Dogs that have been skunked are a miserable mess..they will be foaming at the mouth..sometimes blinded by the spray and usually vomiting..Chance was all of those.  We did not let him in the house. We treated him with “the stuff” outside in the yard.

Far Guy announced the skunking about the same time as I smelled it.   Luckily I had all the ingredients to neutralize the smell.

Mix together and scrub into the dog..being careful not to get any in his eyes.  Let set for ten minutes..rinse and repeat until the smell is mostly gone.  You won’t be able to tell..cause by then everything will smell like skunk to you.  Do not save the mixed up mixture…because it can explode if it is in a closed container. Discard any solution not used.

I now have a skunk bucket..with all the required ingredients inside along with two pair of disposable gloves.  I had to quickly look up the recipe..now it is also in the bucket..should there be a next time. ( I hope there is not a next time.)

It was a full moon that night..and the bird feeders were out. The skunks are looking for any food source they can find..they are bulking up now to go into hibernation when it snows.

I walk Chance at night on his lead.  Far Guy is a bit braver and allows him off lead but requires that he stay right next to him.  They have been practicing the word stop…and Far Guy takes the humongous Cyclops Flashlight outdoors with him at night. 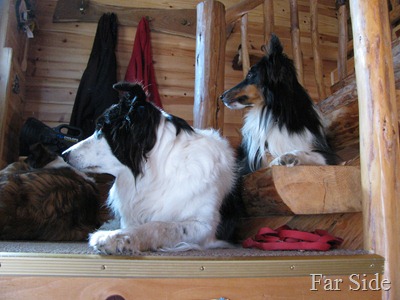 We took care of Miney and Little Elvis last week..no one got skunked…thank goodness. In this photo they were stuck in the house with me..but they all wanted to be outside with Far Guy.

I have always wanted a solid wooden fenced in area in the back of the house..one that could be accessed by the door upstairs. It is now on my list:)